Super Sport 65: the new Rossinavi project, super like the collaboration with Pininfarina, emblem of Italian style in the world. 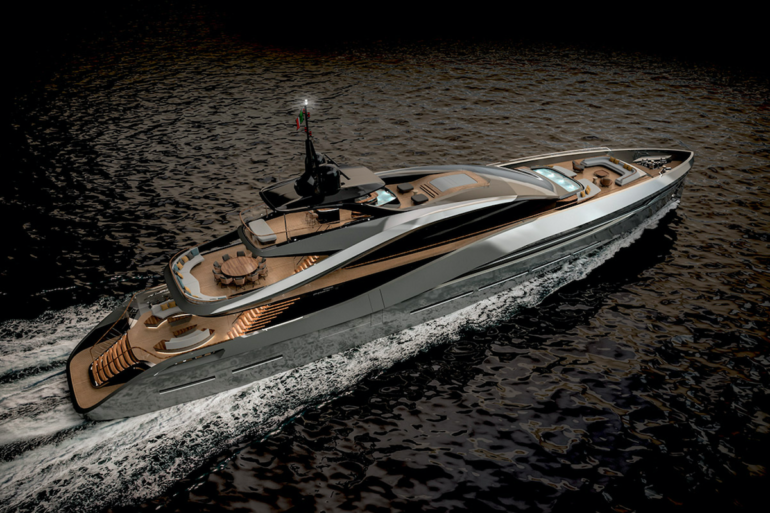 In the presence of Greta Pininfarina, Business Developer of the brand based in Turin (and present with a subsidiary also in Miami), Federico Rossi, COO of Rossinavi, has finally raised the canvas that covered the case containing the long-awaited scale model of the Super Sport 65 project.

Rossinavi is yet another project aimed at upsetting the concept of a boat in this extremely sporty case and not surprisingly realized in collaboration with a world landmark of excellence for high-performance sports cars: Pininfarina. It is active with over 600 projects that has its roots in the automotive sector, where the company boasts masterpieces created for prestigious brands such as Ferrari, Alfa Romeo, Maserati and BMW,

“The only limit in the design of sports boat is the impact on the general floorplan. For this reason, creating a nice balance between interior architecture and exterior design is always challenging. With Super Sport 65 we have overcome this limit”, says Federico Rossi.

Super Sport 65 has an all-aluminum body with a maximum beam of 11 m and a draft of 2.20m to ensure entry into the bays and ports otherwise unreachable for a boat of this proportion. It has a top speed of 30 kn and a cruising speed of 28 kn.

It is also available in the 50-meter configuration with the same external design and with the same draft but with a maximum beam of 9 m, the maximum speed at 25 kn and a cruising velocity of 21 kn.

Both versions can have both the traditional propeller configuration and Roll Royce’s Water Jet KaMeWa, which provide the best propulsion system for vessels that require high performance and safety. In both cases the engines are MTU/Rolls Royce.

From the realization of the Super Sport 65 that is based on the satisfaction of precise and binding specifications to which they stick to, which constitute the Rossinavi pedigree, emerges the revealing fluidity of Pininfarina recognizable with its elegant lines and balanced, visible from its project that connects the bow to the stern with a single line, dressing it with the incretly captivating and sporty features that distinguish the Savoir-faire Pininfarina.

The signature Pininfarina, which inevitably refers to the Gran Turismo of the Trident, is evident in addition to the sinuous design of the wide open spaces used as an entertainment area, also in the stairs that are inspired by the air intakes that blend in the most organic of ways with the windows, from floor to ceiling. Another crucial point for this type of sports boat is the garage: the Super Sport 65 has a 25m tender and two jet-skys and it is also equipped for the Beach club, with a special outdoor platform. In addition to the distribution of large outdoor entertainment spaces and with several lounge areas there are large indoor spaces that include six cabins to accommodate 12 people with seven other cabins reserved for the captain and crew members, Particular attention is placed to the lounge areas in which there are two Jacuzzis set up on two edges of the yacht, on different decks.

A difficult but equally simple project of the Rossinavi-Pininfarina duo who “speak the same language and share the same passion”, says Paolo Pininfarina, Pininfarina’s President. A harmony that has already seen them collaborate in 2017 on the occasion of the Aurea project presented at the world premiere at the SuperYacht Gallery in London and produced from June 1, 2017: a 70 m that focuses on the lifestyle of the owner and guests with a Beach club of record size for a ship of these measures.

With regards to the production of the Super Sport 65, it is as always in the modus operandi Rossinavi, yachts made on demand and with construction time that fluctuates around 36 months for its realization.

(On the title: A rendering of Super Sport 65 by Courtesy of Rossinavi)