Stefano Ogliari Badessi at DAM Miami: The journey between dream and real is done by bike. 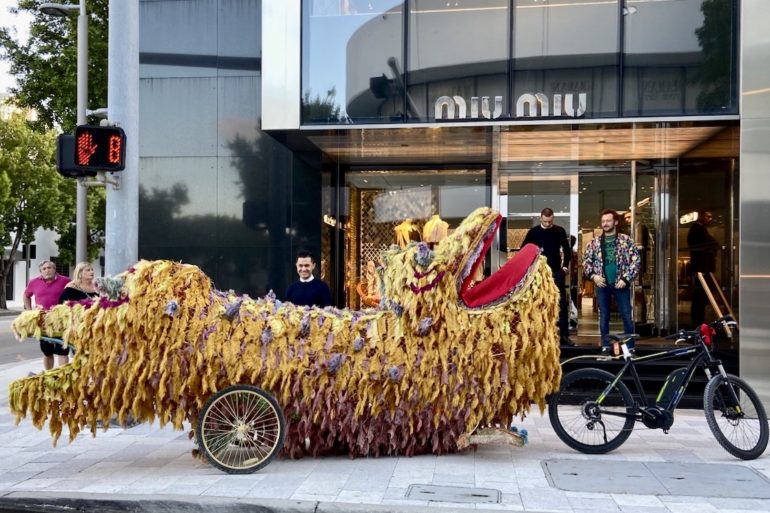 It is a journey between the dreamlike and the real that made by Stefano Ogliari Badessi who exhibits, exclusively for the DAM -The Directed Art Modern- in Miami, his first solo in America A Tribe from Wonderland. The exhibition is, with some novelties, a mix of works from different exhibitions held around the world: A tribe from Wonderland, which had an extraordinary success in Crema, Italy, his homeland, in September 2019 reaching a number of people equal to 15,000 visitors in just 10 days. In addition to this there are reminiscences of the Spherycal Post Card, a series of thematic spheres that tells about particular topics related to China (food, Chinese New Year, etc.) and Stendhal’s Syndrome, held in Hong-Kong in 2014.

Stefano Ogliari Badessi is an Italian artist who made his artistic performance by studying at the art oriented  high school in his hometown and then arriving at the Brera Academy where he graduated in sculpture, after finishing the Erasmus Project in Sevilla (Spain) where he admits to having learned the fundamentals of art with taught  extreme rigor.

Of him you could say that he is a nomadic artist, not so much for the cultural journeys he has made, out of pleasure and curiosity, but rather for his way of being little inclined to life as a studio artist. Stefano’s artistic idea, which has made his way over time, is in fact to travel and compose artistic works with materials easily available on the spot or that are easily transported in the two suitcases (when it is not one) that he carries when moving around.

Two suitcases, technique, creativity and art is made.

Of course there is also the manual work that does not scare him: Stefano has been working on his creature for the past ten days, up to twelve hours a day.

It is like so that his works take shape through plastic and scotch bags that become gigantic inflatables (like the all-gold one made in China in 2014 for Swatch) or, as in the case of the installation produced for his solo at DAM, with the use of rods and construction nets, recycled materials from garbage and waste of production of the precious (and famous) Italian silks of Mantero 1902. 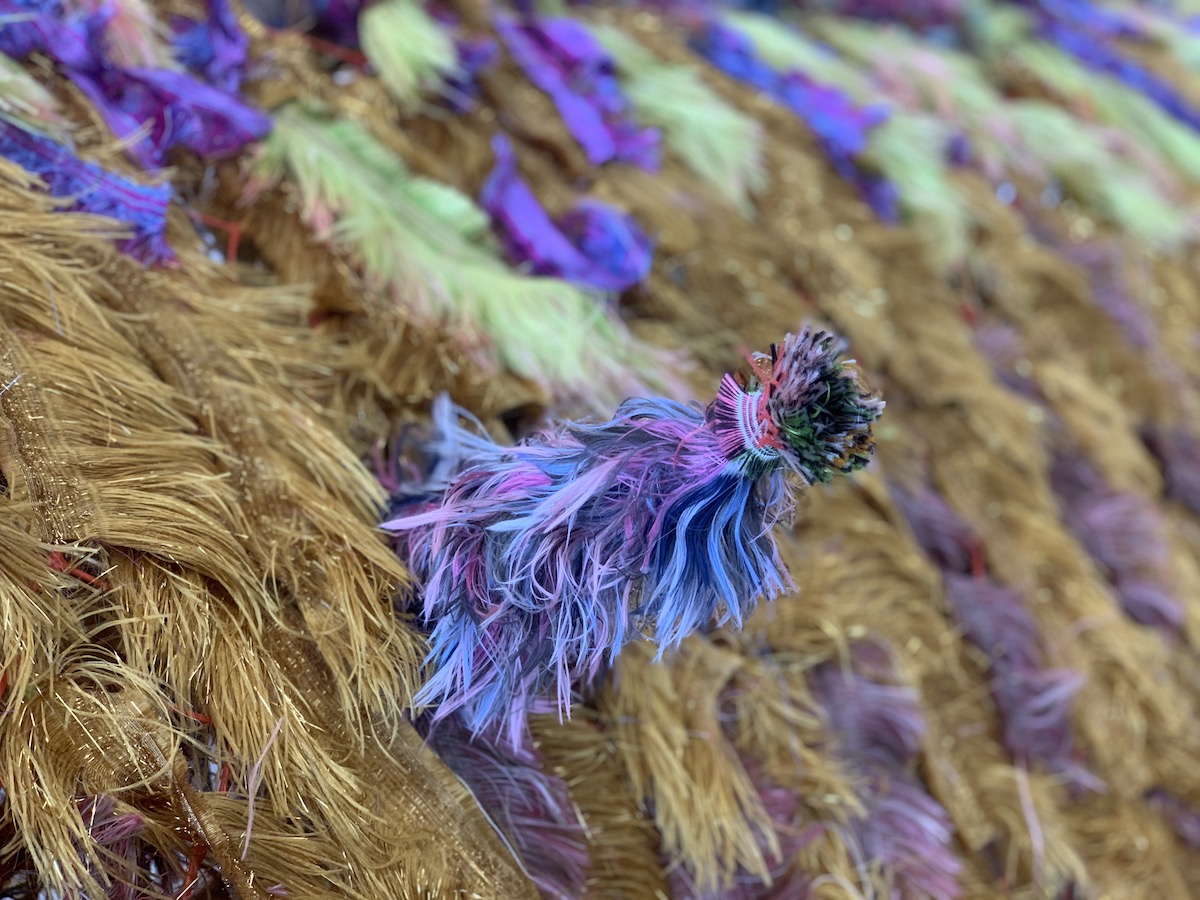 part. from “I Don’t Know Where To Go” with the famous silks Mantero 1902Through the hands and mind of Stefano Ogliari Badessi the thousand colors of silks, waste materials that, after the process of caricature on the coil of woven silk, should be thrown away, come to life and become the epithelial tissue of which his creatures (or monsters?) are composed. Creatures that become suggestive and feed people’s curiosity and imagination, especially when they are transported around the city by bicycle (also acting as a performing art), as it already happened and as will happen during Miami Art Week in Wynwood, Little River and Design District streets. But the works of Stefano Ogliari Badessi can also be seen for the entire duration of the fair at the SCOPE -D03 Pavilion-, at the Sagamore Hotel in Miami Beach on December 5th and especially at THE DAM which will be the official home of his personal, from November 29 to December 31, 2019.

The relationship between the DAM and Stefano Ogliari Badessi began many years ago when the Director of the DAM, Melanie Prapopoulos officially requested it for her gallery, in the wake of the work Spherycal Post Card, produced in China. Since then, thanks to the deep respect that the DAM has for the artists and the optimism that Stefano Ogliari Badessi transmits, their relationship continues to swell: “We grow together a little every time” says the artist. 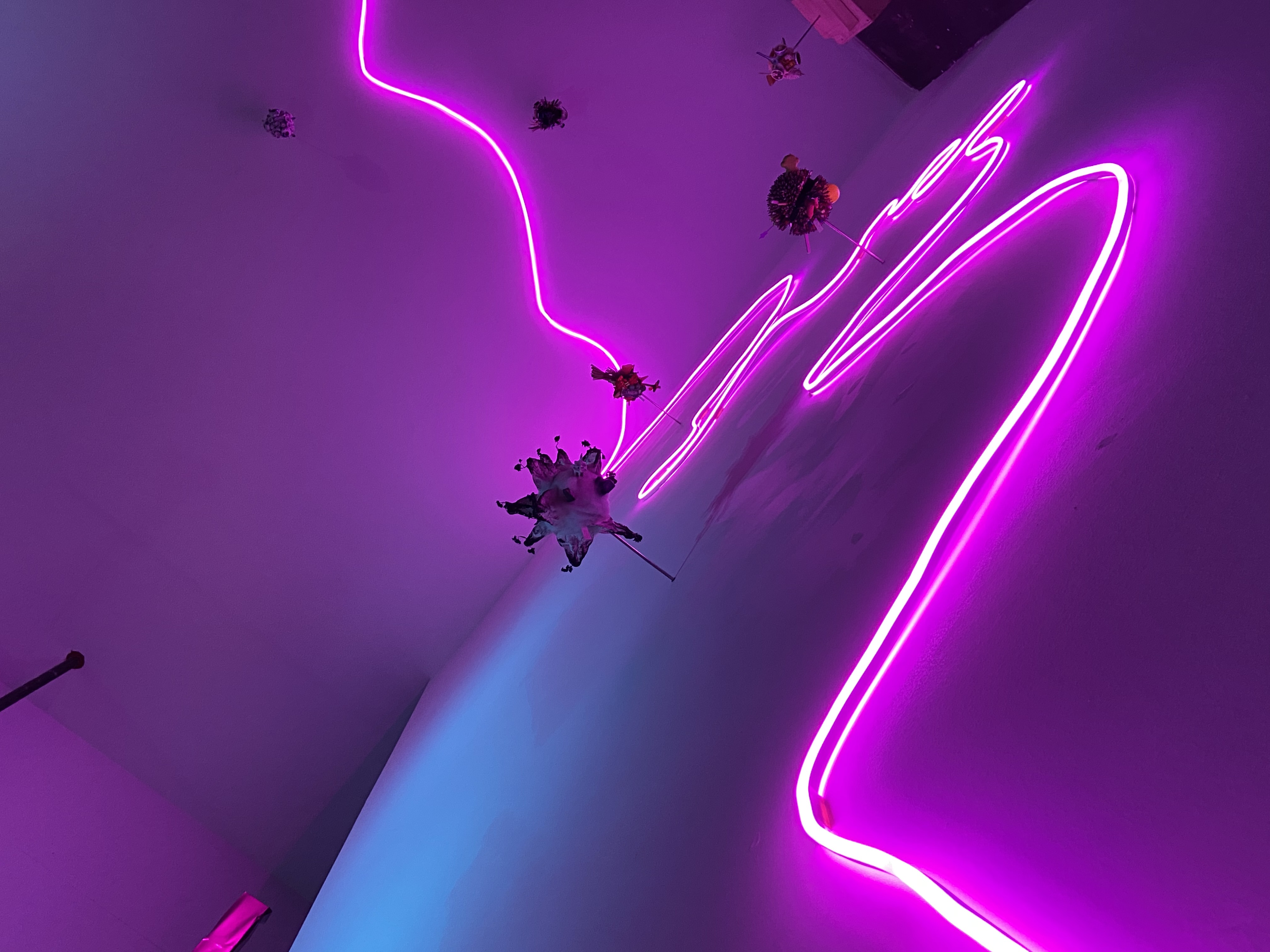 A Tribe from Wonderland by Stefano Ogliari Badessi for DAM, Miami Spherycal Post Card.He left for China with the idea of stopping for a couple of months the artist stopped for more than two years, and had the opportunity to collaborate with Swatch by joining The Swatch Art Peace Hotel, a historic hotel built in 1908 under the name Palace Hotel and later of A five-star art residence made available to Swatch in order to bring together artists from all over the world to experience a unique cultural environment dedicated to contemporary art in the extraordinary city of Shanghai.

The focus of the residence is the creative exchange but the creativity of Ogliari Badessi has found a perfect harmony with the Swatch optics that wanted him by its side for four years, and with which he participated in the 56th Venice Biennale (2015) and a multiplicity of other events around the world, including Faces&Trace by SWATCH at the Art Peace Hotel in Shanghai, and an all-gold work made up of plastic and tape bags from 2014.

At Miami Art Week 2017, he set up a giant red inflatable of sewn fabric on the 40th floor of the EAST Hotel, which transformed the Brickell Skyline with the intention of supporting art in public places. 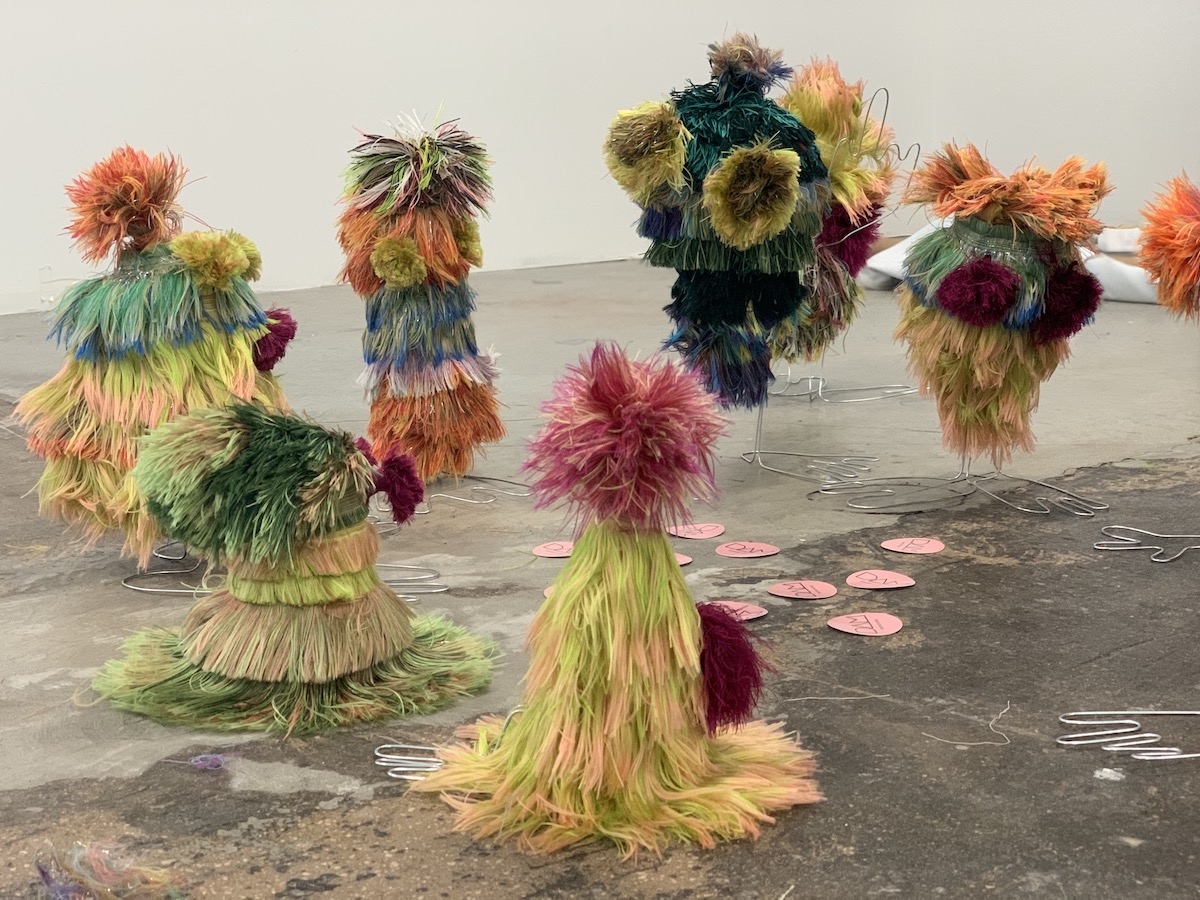 A Tribe from Wonderland at DAM, Miami.In his native land he had the opportunity over the years to create works that have fueled the curiosity of the Italian people, surprised by the art understood as an installation to live. Among his works proposed is the immersive installation RED – Emotional Space, entirely made of red fabric and set up for the Biennial of Soncino, a Marco (2015) in the moat of the Rocca di Soncino, where, through the dungeons of the castle it was possible to access physically and interact with the work: a completely red universe.

For Miami Art Week the artist has set up a great imaginary creature, which moves within the confines of dream and shamanism, the oldest spiritual practice known by man: a means through which to reconcile with oneself and with nature, and which allows you to achieve a sense of liberation and harmony in your life. The monster that “does not know where to go” from the appearance halfway between a crocodile and a bird is a creature with two opposing heads representing the duality (or even multiplicity) present in each of us: “Who with two heads, who with ten, one pulls here , one pulls there and the more they pull and the more they create confusion that in any case prevents you from moving and realizing your dreams” says the artist. The dragon that, while in doubt about what to do, eats unicorns (dreams), dragons, and slices of pizza, everything that it meets on its way (and that is visible inside the structure), because not being able to decide what to do, it must survive with what it finds “It’s a shame because, under different conditions, the unicorn would probably have become his friend rather than his prey”, says Stefano Ogliari Badessi.

Many different initiatives those put in place by the DAM to show Stefano Ogliari Badessi, who speaking about his country says that it is necessary to feed the artistic undergrowth. Large companies should entrust the artists with the development of ideas. In the hope that the Italian artistic undergrowth will begin to be fed, let’s enjoy Stefano Ogliari Badessi on display at the DAM and on the streets of Miami.

(In the title: I Don’t Know Where To Go by Stefano Ogliari Badessi  for DAM, Miami in the Design District).