SPECIAL SALONE DEL MOBILE. MILANO and FUORISALONE- Memphis Again, Gufram and Ettore Sottsass among the protagonists of the Milan Triennale. 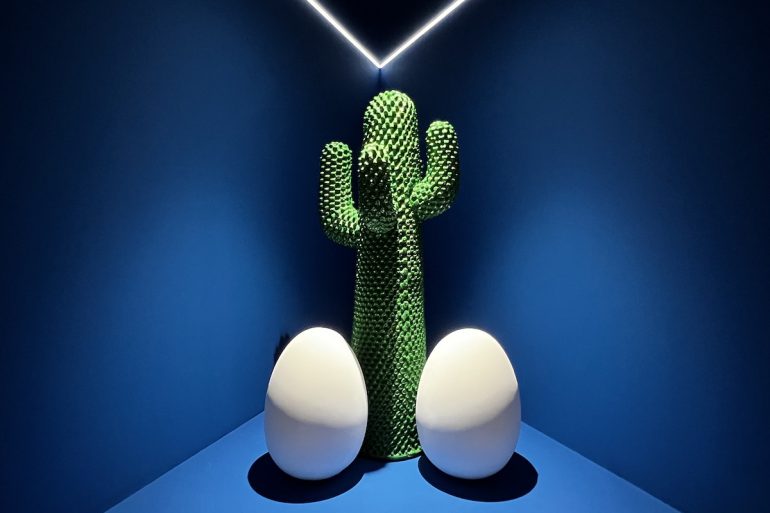 The Triennale Milano has been, since its foundation, a nerve center for the definition and debate of Italian design, guaranteeing, over time, a seat in the BIE -Bureaiu International des Expositions. On the occasion of Milan Design Week, the institution reiterated the need to communicate to the public with the same style that has distinguished it over time and that still characterizes the multiplicity of expressive languages that take shape in it: from design, to architecture; from visual and scenic arts to performing arts.

The Milan Triennale has therefore decided to set up for the Salone del Mobile.Milan/Fuorisalone, the spaces of Palazzo Bernocchi, also known as Palazzo dell’Arte -a rationalist-style building designed by Giovanni Muzio following the Bernocchi Family’s substantial donation-with a variety of exhibitions and set-ups, including: the first solo exhibition of French photographer and filmmaker Raymond Depardon -signature of the Magnum agency- entitled “Modern Life,” set up in collaboration with the “Fondation Cartier pour l’art contemporain,” CACTUSRAMA, “Structure and Color” by Ettore Sottsass and Memphis Again.

With the exception of the permanent exhibition at the Museum of Italian Design in which design pieces produced in the period between 1946 and 1981 are displayed as they are considered among the most fruitful by historians and critics; and at the permanent installation of “Casa Lana,” representing the interior of a private residence that Ettore Sottsass designed around the mid-1960s in Milan, all exhibitions will end in conjunction with the closing of the Salone del Mobile.Milano/Fuorisalone, June 12.

On display, in particular, is CACTUSRAMA: the 50th anniversary celebration of Gufram’s iconic CACTUS® home that revolutionized the domestic landscape, subverting the boundaries between indoor and open space.

Since 1966 Gufram, the Italian interior design brand that creates works in flexible polyurethane, has been making objects that are unique in form and value thanks to the contamination between the approach of industrial design, handcrafted creation and the imaginative flair typical of art.

Born in 1972, from an idea by Guido Drocco and Franco Mello, CACTUS® has become over time an iconic multifunctional totem, available both in the original version and in decorative miniatures that, still today as then, embody the grit, imagination and humor of 1970s design.

On display in the designated space are 12 life-size historical editions of the CACTUS®, cyclically reinterpreted according to the color, the style of the moment and the different style of those who wanted to reinterpret this icon: Paul Smith (Psychedelic CACTUS®, 2016, edition of 169 pieces); GOD by Toiletpaper -the creative studio born from the collaboration between Maurizio Cattelan and photographer Pierpaolo Ferrari (2013 work, produced in 100 pieces); REDSOCACTUS and NEROCACTUS from 2010, (edition of 500 pieces); LEBLEUCACTUS (from 2015, in 33 pieces) and the lime version with “scorched” ends of METACACTUS ( from 2012, in 300 pieces); ANOTHER GREEN CACTUS® and ANOTHER WHITE CACTUS® (both from 2018) and for the first time three versions -ANDY’S BLUE CACTUS, ANDY’S YELLOW CACTUS and ANDY’S PINK CACTUS- interpreted by the artists of The Andy Warhol Foundation for Visual Arts (2022 edition, in only 99 copies each).

It is, however, in the “Memphis Again” exhibition directed and curated by Christoph Radl, a longtime collaborator of Ettore Sottsass, that all the driving force of the celebrated architect and designer emerges, and it comes to life through the minimalist geometric lines, bright and glossy colors (black above all) that make up the more than 200 works, with a kitsch flavor, created by members of the “Memphis Group” collective. The group founded by Sottsass himself, and named after a Bob Dylan song -Stuck Inside of Mobile with the Memphis Blues Again- was active, as the last avant-garde expression, between 1981 and 1987.

The “Memphis Again” exhibit is designed to recreate the atmosphere of the time, with soft nightclub-style lighting and “80s” music, by Seth Troxlerin, the background. On the walls flow quotes from some of the group’s members and great architects and designers, while in the exhibition area, “parading” on a catwalk nearly 100 meters long: objects and furniture made of different materials-woods, plastics, laminates, glass, ceramics, porcelain, silver, steel, textiles-and created between 1981 and 1986 for the Memphis collection.

Established as an alternative proposal for updating the language of design and architecture, the Memphis Group, which was initially born with the purpose of solving functional-industrial problems, has instead emphasized the psychological-emotional aspect of the problem and discipline, freeing it from social conventions. With this in mind, “Memphis Again” is not intended to be a tribute to the collective as much as it is a food for thought aimed at attention to the expressive and cultural possibilities of design that go beyond the mere concept of marketing. Among the works on display are works by: Michele De Lucchi, George J. Sowden, Martine Bedin, Andrea Branzi, Shiro Kuramata, Marco Zanini, Matteo Thun, Peter Shire, Aldo Cibic, Nathalie Du Pasquier, Gerard Taylor, Masanori Umeda, Arquitectonica, Michael Graves, Hans Hollein, Arata Isozaki, and Javier Mariscal.