SPECIAL SALONE DEL MOBILE. MILANO AND FUORISALONE – Rossinavi, presents “BluE, The Underwater Experience” and announces a preview of its collaboration with Zaha Hadid Architects in the construction of “Oneiric” 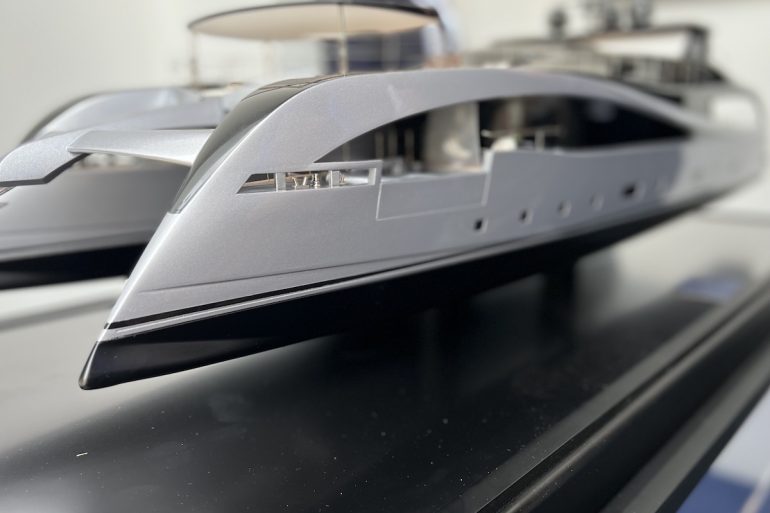 Rossinavi the Italian, industry-leading company that produces the latest generation of luxury boats debuted at (the) Il Salone di Milano/ Fuorisalone, with an immersive installation entitled “BluE, The Underwater Experience” at the famous “Supersalone Più” in Milan’s Tortona area. Supersalone Più is a historically important nerve center in the city of Milan, which was able to bring about a revolution in radical architecture in the 1960s, also investing in design, fashion and other areas.

The installation presented by Rossinavi at Superstudio Più invites visitors to immerse themselves in a marine environment to learn about the Phytoplankton whose life cycle is the source of inspiration for the company’s green projects. Phytoplankton are tiny, vital and sensitive creatures that have inhabited the planet for hundreds of millions of years and have always contributed to its well-being. Because of their ability to release oxygen through photosynthesis, phytoplankton can consume 11 gigatons of CO2 per year. Phytoplankton encapsulates the magnificence of history and the fragile delicacy of life, representing Rossinavi’s vision and challenge in the development of new projects that are absolutely environmentally friendly.

Following the presentation during the last edition of Design Miami/, of Sea Cat 40: the new revolutionary, all-electric catamaran, Rossinavi is participating for the first time in the Milan Design Week with two miniature prototypes of Sea Cat 40. The first is the catamaran that will be completed in 2024 thanks to the collaboration with the nautical architect Fulvio de Simone -a well-known signature that had previously created the impressive “Utopia VI.” The second-and we at Miami Niche had an informal preview during the last edition of Design Miami-is “Oneiric,” which instead bears the signature of Zaha Hadid Architects, ZHA.

If the news does not surprise us, on the contrary, we are impressed by the innovative spirit that always distinguishes the Rossinavi shipyard.

In Oneiric, in particular the soft, cornerless lines that distinguish the style of Zaha Hadid -architect who redefined 20th century architecture- will marry the basic configurations of the Sea Cat 40.

The Sea Cat 40, represents a new generation of boat: equipped with three levels of solar panels, fully integrated into the design, it can sail up to 100 percent of the time in all-electric mode and up to 70 percent on transatlantic crossings, saving about 40 tons of CO2 compared to a conventional boat.

“We are so very very happy with what we are doing and the direction is the right one,” says Federico Rossi, COO of Rossinavi, which anticipates a significant increase in demand for this totally innovative and environmentally friendly type of sailing.  ( For specifics please read the article, “Art and Navigation: Rossinavi presents Sea Cat 40 at Miami Art Week, the new environmentally sustainable catamaran revolutionizing the sailing world,” Dec. 5, 2021).

Rossinavi projects are always evolving and who knows what they will have in store for us at the upcoming Miami Art Week. Stay tuned to find out together!

(on the title: the prototype of “Oneiric” by Rossinavi and Zaha Hadid Architects)