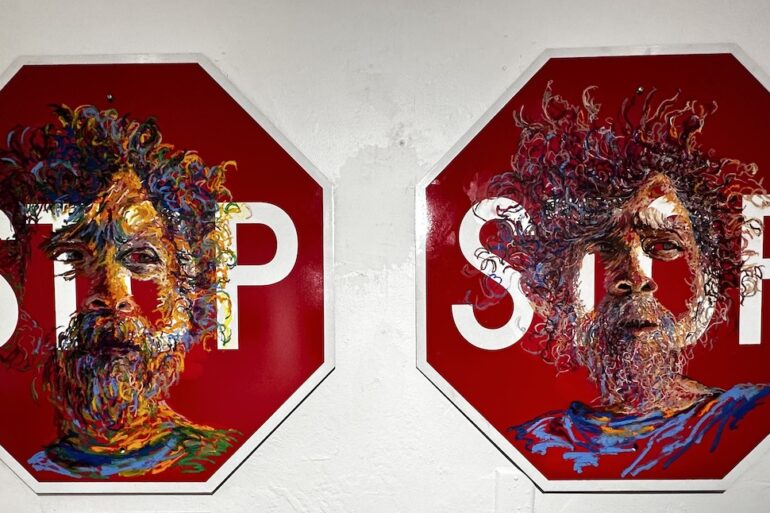 The installation of the sixteenth edition of Aqua Art Miami, set up as usual in the South Beach hotel of the same name, cleared away the furniture of the rooms overlooking the lush interior courtyard, to make room for the forty-one galleries individually set up inside each room.

The purpose of AQUA Art Miami is to offer visitors a destination to purchase works by emerging and mid-career artists in the diverse landscape of Miami Art Week fairs, about which, Cordelia de Freitas, the fair’s new director, said, “It is with great pleasure that we bring Aqua Art Miami back to Miami Art Week this year. Aqua has always been a staple on the roster of fairs during one of the most important weeks for contemporary American art. I am confident that this year’s edition will not disappoint you!”

What sets AQUA Art Miami apart from other art fairs is the bubbly, party-like nature of both the galleries on display and the visitors, who combine the art experience with the opportunity to visit one of Miami’s historic hotels.

A sister fair of Art Miami+ Context, AQUA Art Miami while having grown,  in terms of the numbers of participating galleries, maintains the festive and energetic spirit that characterizes it.

An energy that stems mainly from the good vibes that hover both in the air and among the artworks on display, rich in color yet loaded with social meanings.

Among the galleries that not only exhibit high quality works but also socially important projects, is the Fort Lauderdale’s Modard Gallery, which has chosen artist Vered Pasternak, among others, for the AQUA Art Miami exhibition.

Israeli-born artist Vered Pasternak, presents three works from the “Stop Homelessness” series: poignant portraits, made on original street signs that metaphorically represent the decorations of the environments that homeless people inhabit, the streets. The works are also made with Sennelier’s precious stick oil paints: the iconic brand created to meet the needs of French impressionist painters.

Like the French Impressionists, Pasternak makes the paintings with small dabs of color, which vary as the planes of the face change. Unlike the Impressionists, however, her palette is rich in intense colors with which she conveys the intensity of mood of David, the subject depicted on her works. David is a homeless man living in the Wynwood area with whom, ten years on, she has managed to establish a relationship of mutual trust. Credit must also be given to the special empathic gifts that Pasternak possesses and with which, beyond the objective beauty of the compositions, she manages to overcome the visual limits of art to get straight to the heart of the viewer.

The series, which is part of a larger project, aims to shine a spotlight on the reality of homelessness. For this reason, 20 percent of the proceeds realized from sales will benefit the association that cares for the homeless in the city of Miami.

Contempop Gallery is exhibiting the works of artist Natan Elkanovich. The son of a Holocaust survivor and a prisoner of Stalin’s communist regime, Elkanovich has chosen to celebrate life and the gifts it has preciously given him.

In the wake of processing his childhood experiences of when, in order to escape the label of subversive that limited his ability to express himself, he would lock himself in the kitchen with his mother and decorate the food she cooked, he devised a very particular painting technique, which he later employed indiscriminately, both on canvas and metal. Elkanovich creates works of three-dimensional painting. This is meticulous work composed of small dots and decorative stars, rich in color and varying in size, which he creates with a combination of many types of plastic materials, which the artist meticulously applies to surfaces, using, sometimes even to the present day, tools drawn from the culinary compartment familiar to him.

Among the initiatives at the fair, AQUA Art Miami, selected “Save a Life in Ukraine.” A project created by Ukrainian artists Sonia Atlantova and Olexander Klimenkc who make icons using wood fragments and ammunition boxes abandoned by Russian soldiers. All proceeds from sales are donated to medical hospitals caring for soldiers wounded in war, a visual oxymoron with which to celebrate life with materials that bring death and destruction.

Stephanie Serpick’s oil compositions for Marloe Gallery are works of pure poetry that celebrate the refined, intensive-labor techniques that characterize contemporary realism and draw on simple everyday objects. The works, especially those referring to the series of unmade beds, in which the only trace of human presence is provided by the shapes imprinted on the pillows, were conceived by the artist in times of pandemic as a sign of participation in the grief -straumatizing- that has struck the entire world, causing the death of friends and relatives. A trauma that we are unlikely to overcome.

However, if one looks at Serpick’s works, in the absence of an interpretive constraint, one is enraptured before the simplicity of the scenes she depicts that emphasize, through extraordinary tonal and chromatic passages, the three-dimensional rendering of objects.

The dynamism of artist, actress and performer Eloise Valli, represented by the Shim Art Network gallery, is simply a hymn to joy that flows into the energy of the artist, who usually makes large canvases. For AQUA Art Miami, Valli, has chosen to showcase small copies of the originals, leaving it to her skills as a performer to narrate the compositional and thought processes.

In her works, which reference both psychoanalysis and the night-day duality that characterizes Chinese philosophy, there is the ongoing search for balance given by the acceptance of the dark sides of one’s personality. Sides that we tend, out of a spirit of survival, to repress, but which, as an integral part of the complexity of the human nature, are bound to recur cyclically. This is a universal process that involves men and women indiscriminately and is particularly felt in adolescence, where dark thoughts take over and confining the individual to dark solitude.

But, as is the case in the best fairy tales, as well as in Valli’s purposeful canvases, good triumphs over evil and light penetrates among the darkness, bringing a glimmer of splendor that allows the lost balance to be restored.

Among the works selected by Kyle Hamilton for the Miami Beach Fine Art Gallery of the same name, it is the overflowing colors bordering on fluorescent that especially characterize the works of artist Justyna Kisielewicz. Kisielewicz’s works, as by her own admission, are a riot of color in which nude figures, female and male, pose in a combination of idyllic characters and scenes drawn from art history. With these elements, Kisielewicz tells a wholly personal story in which color is the universal binder and the source of energy on which she continually draws for her compositional process.

Finally, among the artists on display at the AC Latin Art gallery, the predominantly digital compositions by Ecuadorean-born artist and educator Paula Arias combine key elements of Aboriginal traditions, in which: Latin American folklore, the vibrant colors of tradition and ancestral dances, linked predominantly to the role of the female figure, abandon human features and transform into fluid bands of color that move sinuously as in a celebratory dance capable of empowering the energies of resilience, resistance and struggle for the natural territories of Aboriginal communities.

(on the title, Two of the three portraits of the series, Stop Homelessness by Vered Pasternak)