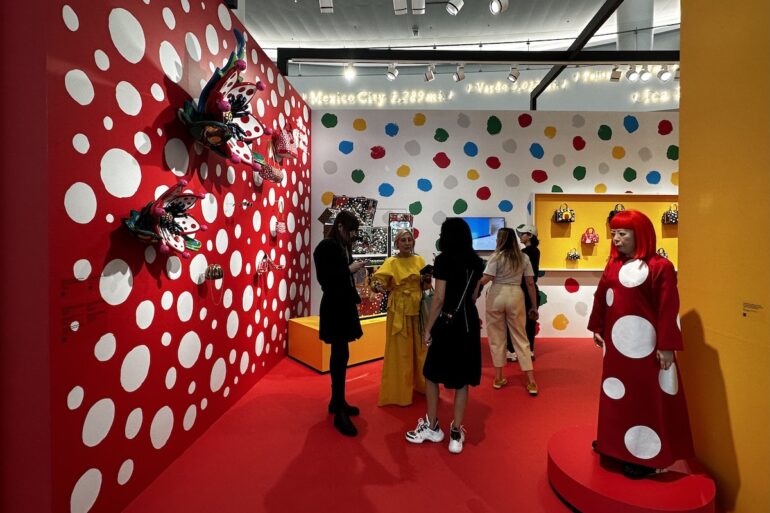 ArtyCapucines, the project by which Louis Vuitton combines the classic Capucines model, created in 2013, with “interesting, contemporary and relevant creativity”-as defined by Louis Vuitton’s chairman and CEO Michael Burke-with icons from the art world, celebrated the 20th anniversary of Art Basel in a completely innovative way.

Demonstrating the luxurious French maison’s association with the art world, Louis Vuitton presented the new limited editions of the Capucines (and other inspired models such as, the Papillon, Speedy and Lockit models) in the exclusive west hall of the Miami Beach Convention Center: the historic home of Art Basel/Miami Beach, the winter sister of the fair held in June in Basel.

In addition to unveiling the names of the latest two artists to join the project following in the footsteps of: Tschabala Self, Ugo Rondinone, Jeff Koons, and Richard Prince, to name a few, the iconic models that will be available for reservation, starting in January 2023, were displayed.

This year’s artists, presented in a booth as artistic as their decades of production, are the over-90-year-old Yayoi Kusama and Takashi Murakami.

Both, with a unique and inimitable style united by the use of intense colors, they feature distinct elements. Murakami’s favorite subjects are smiling flowers, which he combines with motifs from traditional Japanese folk culture, such as pandas. Cute, psychedelic and satirical elements that arise in response to repressed and contradictory emotions related to the collective Japanese trauma experienced after the bombing of Hiroshima and Nagasaki in 1945.

Yayoi Kusama, on the other hand, is characterized by the characteristic “Infinity Dots” more than pumpkins because they represent the repetitive and obsessive elements made by the artist to eliminate the intrusive thoughts that have characterized her life and led her to choose to live in a psychiatric hospital, where she still works.

In the booth, in addition to the flowers affixed to the polka-dotted walls along with the bags, briefcases and accessories, there are two life-size wax statues of Yayoi Kusama, made by the artist herself: in 2012 on the occasion of the first collaboration between the artist and the maison, and the second, a decade later, to celebrate the second historic collaboration.

Murakami, on the other hand, is represented by a large panda arranged on a vintage trunk of the maison. At the entrance to the booth there is an oil portrait by Alex Katz, who together with Richard Prince made the decorations.

Louis Vuitton’s close relationship with the arts has ancient origins. It began about a century ago when Gaston-Louis Vuitton, grandson of the maison’s founder, commissioned several artists to create billboards to sponsor perfume bottles. The collaboration with the artists became a full-fledged partnership in 1988 when the maison collaborated with some of the biggest names in modern art and design, including: Sol LeWitt, James Rosenquist, Cesar and Olafur Eliasson. The maison also began a curatorial activity with artists such as Sophie Calle, Dan Flavin and Francesca Woodman in the maison’s galleries. The assiduous and intense collaboration led in 2014 to the construction of the historic Louis Vuitton Foundation in Paris, signed by another major figure in the contemporary art/architectural scene, Frank Gerhy.

(on the title, ArtyCapucines by Louis Vuitton at Art Basel/MiamiBeach, 2022)