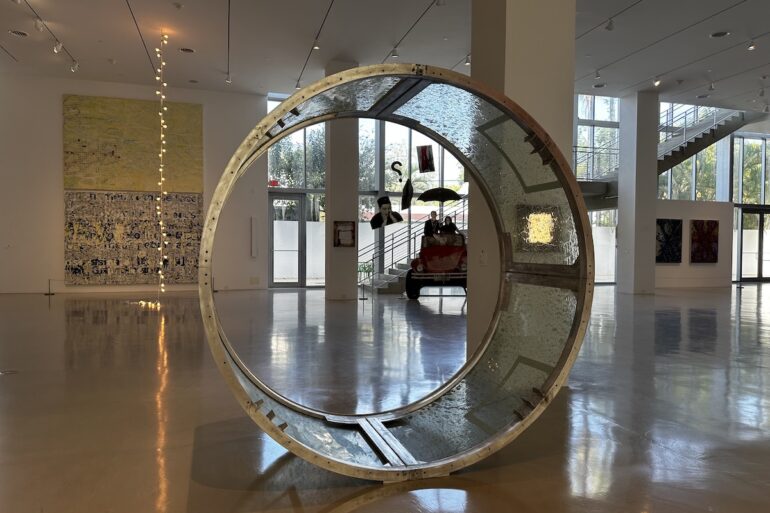 Rosa and Carlos de la Cruz, wealthy Cuban-born collectors of contemporary art, brought together the paintings, sculptures and site-specific installations from their private collection for Miami Art Week to bring to life “Together, at the Same Time,” the story of the collection revisited in the context of the moment.

The collection, spread over three floors in the large building that opened at Art Basel/Miami Beach in 2009, is in the heart of the Miami Design District and is an extension of the home of Mr. and Mrs. de la Cruz, who, in a riot of form, volume, style, and genre, have converged, in the same environment, decades of contemporary art history, with a particular emphasis on Latin art.

Indeed, the first piece acquired by the de la Cruz family is the work “Star Gazer” (1956) by Rufino Tamayo, an artist famous for combining modern European painting styles with popular Mexican themes. On the third floor of the building, in an ups and downs that traverse the styles and techniques of international conceptual artists are, among others: Salvador Dali’s work “Portrait of Dolores Suero Falla” (1955) a portrait the artist made of Carlos de la Cruz’s mother, also a collector. Among the prominent authors inhabiting the third floor of the collection there are Ana Mendieta and Félix González-Torres, both of Cuban origin and both who died at a young age.

Gonzalez-Torres with the two works exhibited, “Untitled, Portrait of Dad “(1991) and “Untitled,” (1989/1990) invites viewers to a physical as well as intellectual involvement: his sculptures of wrapped candy poured close to a beam, as well as the sculptures of stacks of paper printed with texts, challenge the convention of the otherworldly preciousness of art by making the viewer an integral part of the process as he or she is invited to consume the artwork.

The collection relating to Ana Mendieta held by the de la Cruz family is among the richest and most valuable in the world, and it is no coincidence that the physical space devoted to the artist alone is one of the permanent fixtures of the collection. In addition to numerous photographic works and videos, there are also a number of sculptures on display that depict the pivotal points of her artistic career based on “earth-body” works.

Alongside Kenyan artist Cosima van Bonin’s giant installations are the multiple works of Gabriel Orozco, defined in 1998 by Italian curator Fracesco Bonomi as “one of the most influential artists of this decade, and probably the next one too.”

The works of American artist Dana Schutz, though abstract, somehow hark back to the feelings aroused by looking at the works of Portuguese artist Paula Rego, celebrated this year at the 59th Venice Biennale. As with Paula Rego, Schutz’s works, are complex canvases that convey emotions and psychological states by revealing the complications, tensions and ambiguities of contemporary life.

Also on the third floor, in addition to the work “Femme” by artist Wilfredo Lam, who sought in his artistic journey, to portray and revive the enduring Afro-Cuban spirit and culture, there are oil and enamel inlays by Italian artist Rudolf Stingel and a display of artworks created by a number of Miami artists, including Chris Dougnac, who with the work “Tech Demo #3 (Landscape with the Body of Phocion Carried Out of Athens, 1648)” has reworked Nicolas Poussin’s famous canvas (in the version housed in the Louvre) working exclusively on a tonal scale with the Green Screen technique.

The second floor of the collection is devoted to contemporary artists both local, such as Pepe Mar, and international. Aaron Curry’s large installation, spread over most of the floor, and Nate Lowman’s works, posted on the walls, are interspersed with the Afro faces of Murjoni Merriweather, artist in residence at Fountinhead in Miami.

There are several female artists on display who have completed art residencies in Fountainhead spaces and then landed in museums, galleries and collections around the world. Among the various Fountainhead Alumni on display at the de la Cruz Collection are: Christina Quarles, whose large abstract paintings address themes of racial and sexual gender identity and queerness; Ilona Szwarc, whose photographs and installation explore themes of identity, transformation and the dopplegänger (synonymous with twinning or representative of a double life); and SuSu (exhibited on the second floor) who, with her refined oil paintings, she highlights, representing herself through her face and other body parts, a distorted and swirling world composed of liquefied pop iconographies combined with Chinese symbolism that highlight the artist’s reflection about the struggle against misunderstandings that characterize the way China and the United States understand and portray each other’s cultures.

Also on the second floor of the building, set against the backdrop of two paintings by Jorge Pardo, dwell the welded copper pipes of Le Corbusier’s prototypes: individual structures that represent the emblem of the creative man’s rationalism and practicality. The prototypes later became the iconic LC2 and LC3 (LC stands for Le Corbusier), still produced by Cassina, which holds the copyright, bypassing the concepts of fashion and time.

Wade Guvton and Kellev Walker, on the other hand, revolutionized the concept of the table by elevating it to a sculpture that takes on different sculptural connotations depending on its spatial position.

The ground floor is the floor of Paulina Olowska’s “Pattern Painting-Cutout-Vintage Design” installation and large canvases by Jennifer Guidi and Starling Ruby, who is also the author of the large installation “Monument Stalagmite,” as well as the enigmatic and fascinating sculptures by British artist Thomas Houseago, who makes sculptures out of materials as diverse as Tuf-cal, iron rods, or redwood.

But the ground floor is primarily the place dedicated to the works of Rashid Johnson, recognized as one of the most important voices of his generation. The present works, which trace his compositional history, made in different mediums, head to the most recent “Untitled Escape Collage” (2018). The work represents a synthesis of all the artistic processes carried out by the artist, who gives life to a complex multidisciplinary practice in which the different materials used, rich in symbolism, is used to narrate his personal story with which he explores different themes related to: art history, cultural identities -individual and shared, personal narratives, literature, philosophy, materiality and critical history.

(on the title, the entrance at de la Cruz Collection)