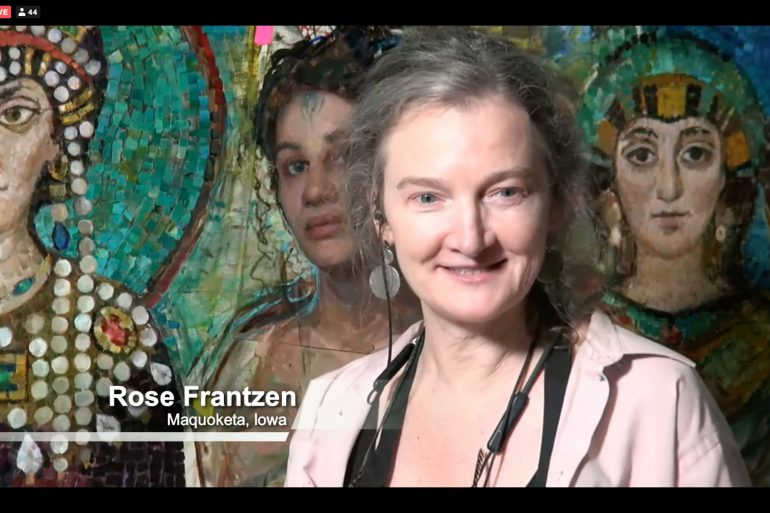 For as long as the world has existed being inspired matters because it is from inspiration that innovative ideas are born.

The first session of the second day of Fall Portrait Academy began with the question: Which artist inspired you and why? An opening question as valuable as the virtual tour of the art studios completed yesterday. The reason for this is easy to say: it is from the inspirational sources that artists make narrative and stylistic choices that can reveal a lot about the artist’s personality and thoughts.

One example is Mario Robinson who accidentally discovered his stylistic model, Andrew Wyeth, in the bookstore during his studies, urged on in the pursuit of his artistic talents by the loving support of his teachers Miss Mitchell and Miss Elvenger.

The paintings of Mario Robinson, a superb watercolorist, harken back to the sincere accuracy of A.Wyeth’s works with his colors on brown and black in the gentle depiction of people. “Andrew Wyeth reinforced the concept of why I paint,” Mario Robinson said about him.

While for Anna Rose Bain the annual meeting of the Portrait Society of America was one of the most important moments of her life because she had the chance to meet her muse: the lovely artist Nancy Guzik -wife of the late Richard Schmid-, for Adrienne Stein it was a revelation, since she met her husband, the artist Quang-Ho. Stein mentions many sources of inspiration from different periods that have characterized her pictorial production, from the greats of the past such as Sir Lawrence Alma Tadema, Dante Gabriel Rossetti and Tom Thompson, to N.C. Wyeth, Maxfield Parrish, Arthur and Lucia Mathews and Violet Oakley to arrive at the contemporaries Ben Kamihira, Jamie Wyeth and Paula Rego.

“Finding out the nuts and bolts behind your masterful works can help give one confidence to even think about trying to emulate what we love”, says one participant about the stories made by the protagonists.

Encouragement and feedback are the key words of the second session of the symposium dedicated to the critics, during which Louis Carr and Kristen Yann selected and analyzed some of the works of the participants offering advice and food for thought, not only about color, value, composition of the works but also about the choice of the borders, the way of taking the picture and the use of photoshop. The critical session, lasting an hour and a half, represented as always a great formative moment, fundamental in the professional growth of an artist, who has the opportunity to increase their skills starting from the awareness of their own or others’ mistakes, through the advice of the faculty members.

“Entertaining, interesting, inspirational–and all that!” was the definition given by a participant in the hands-on session given by the wonderful Rose Frantzen. She is always a surprise: an overwhelming charge of energy able to completely channel the attention of the viewer, enraptured by the flood of concepts, advice and general cultural information that the artist dispenses.

Rose Frantzen for the occasion has elaborated the section of a canvas that is part of her latest series: Incarnate. The series is composed of classical images revised in a contemporary key: in the case of today’s canvas it is the oil representation of Byzantine mosaics from which the figure of the model emerges. A very powerful image that contrasts the static and two-dimensionality of the Byzantine figures with the three-dimensionality of the model. A composition of great emotional strength and full of meaning. Working at “Alla Prima painting” in an innovative way on an almost life-size canvas, Frantzen showed her innovative approach to paint: equipped with cloth paper and using a transparent sheet that removes and leverages at incredible speed, she made a block-in on which and then she refined the shapes and balanced tones and values with a brush in search of pattern.

In the realization of the artistic process, Frantzen reiterates the importance of working in freedom: “You must feel freedom: the freedom to create and to fail”.

Finally, one piece of advice she insisted on a lot during her demo is the need, for successful work, to look for relationships between the parties. A process that the artist performs over and over again during the demonstration because: “In the artistic process it is important to help with everything that is available”, says the artist who at the end of his demo attended, in an out of program, the after hours in the company of Louis Carr, Mario Robinson and Adrienne Stein. The post symposium panel discussions are valuable moments of exchange and confrontation among the artists.

An extraordinary day that was a great success among the participants who will meet again tomorrow for the last day of the symposium in the company of Suchitra Bhosle and Pramod Kurlekar.

(On the title: Rose Frantzen)


Steward White, will be among the teaching artists

EN-Back for the second year in a row Realism Live,

Craig Nelson will be among the teaching artists in

Last minutes to subscribe at Realism Live. It will

Today is the day of the first annual 'World Skin T

Dan Thompson, will be among the teaching artists i

Third day of Miami Art Week where, after a long wa

Melissa Franklyn Sanchez will be among the teachin

(…) There are those who study works of art in bo