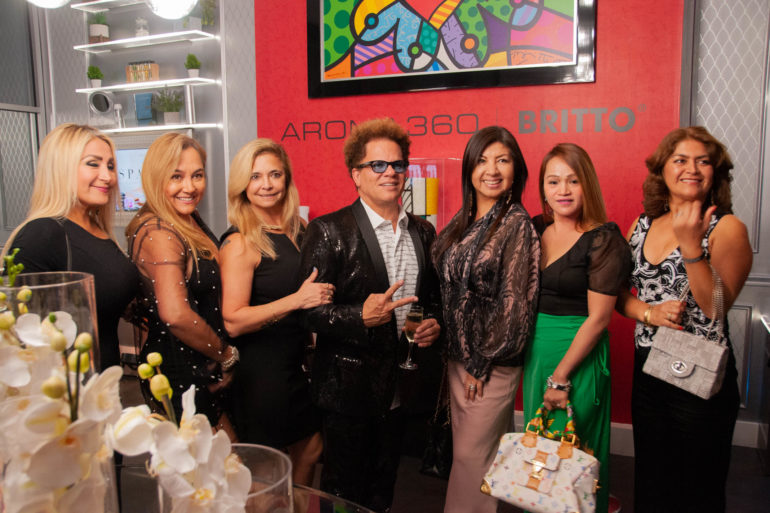 AROMA 360, the company that produces natural essences and aromas, celebrated in big style, in its beautiful store in Wynwood, the collaboration with the artist by the irrepressible joie de vivre Romero Britto, who for the occasion designed a line of candles exclusively and in  limited series.

AROMA 360 was born in 2015 from the idea of the visionary founder Farah Abassi, supported by partner Benny Aboud. Farah Abassi is an expert in essences who has approached the subject since, at the age of 15, she found work in an aromatherapy store in Vancouver, Canada, the city she grew up in. Subsequent studies and a long trip to Thailand have made her a respected character in the environment. She has worked for prestigious hotels and entertainment personalities including Gabrielle Union and David Grutman. Her brand, AROMA 360, is the brand of aromatic speakers that aims to communicate how the choice of aroma for the environments is as important as the choice of furniture or lighting. At the base of AROMA 360 are the notions of Aromacology (or psychology of aroma): a science born in Japan in the 20th century (different from Aromatherapy) that focuses on the impact that different smells produce on the brain, triggering different emotional reactions. Fragrances can be used to drive sales or improve their perceived value, can be used to increase feelings of trust and tranquility and can even be customized, offering a range of healing properties that help harmonize the mind, body and soul.

“Scent is a powerful tool widely under-used in view of the fact that smell is more a sense related to emotions and memories than others. Research shows that you are 100 times more likely to remember something based on an olfactory memory than on a visual memory. This is because the sense is the only one of our senses that bypasses the cognitive nucleus of the brain by reaching directly to the limbic system, which is the most primitive part of the brain. In other words, it means that we smell before we even think”,  says Farah Abassi.

Unlike traditional systems that use heat in diffusion, damaging the therapeutic benefits of essential oils, AROMA 360 uses the cold air diffusion system, an advanced technology that works using high amounts cold filtered air that is pressurized by spraying the oils ensuring their persistence and healthiness of the air.

From today, in addition to the olfactory benefit AROMA 360 is colored by the optimism of Romero Britto who after different collaborations with some global brands, including Dolce and Gabbana, has designed the line of diffusers for AROMA 360.

As an artist with extremely colorful stylized shapes Romero Britto established himself in the international art scene in 1989, when he received the assignment from Absolut Vodka, to design the labels of the bottle for an advertising campaign. Since then his pop sensibility has collaborated in the creation of limited editions with international brands such as Audi, Bentley, Coca-Cola, Walt Disney, Evian, Hublot and Mattel. He was awarded the title of Ambassador of the Arts of the State of Florida and in addition to having made portraits of characters from the business world, politics and entertainment he portrayed the legendary Ernst Beyeler, founder of Art Basel. The portrait is on display in the Beyeler Foundation along with works by Klee, Monet, Cézanne, Picasso, Matisse and Giacometti. His works are not limited to painting on canvas but also making furniture, limited edition objects and costumes, including those for the 41st Super Bowl. His works, recognizable all over the world, are characterized by lively and colorful subjects that offer his optimistic view of the world around him: a visual language of hope and happiness.

In addition to being an artist Romero Britto is an activist for charities: he supports his role as an artist as an agent of positive change: “Art is too important not to be shared”, says Britto. His hometown, Miami is full of works by the artist, who in addition to having a personal gallery on Lincoln Road, exhibits on the streets: his is the work of the residential building that you see from I-95, the sculpture at Miami Children’s Museum and the outdoor sculpture of the shopping Center between 5th Street and Alton Road in Miami Beach, among many.

To infect with his positivity from today there will be the delicious candles of AROMA 360 that awaken the senses, relaxing the soul.