Realism Live Official start: a full immersion among the greatest artists of the contemporary realism scene. 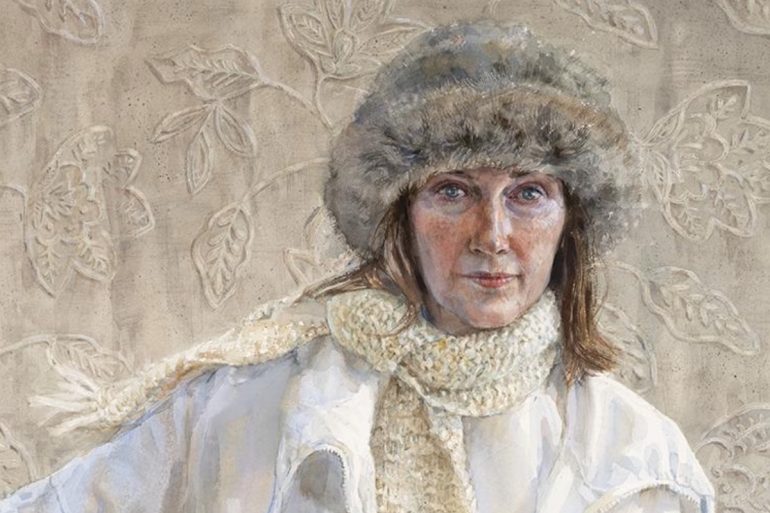 The convention opened with the greetings and the thanks of the two founding members: Eric Rhoads, charismatic character who: ”one thinks and a hundred does” and Peter Trippi, editor-in-chief of Fine Art Connoisseur Magazine.

The day unofficially began with a demonstration by Blick Art Materials ambassador Zhenya Gershman, who created a demo focused on the realistic evocation of her daughter’s image by introducing the audience to the tools she routinely uses, all of which are of course available from Blick Art Materials, Platinum Sponsor of the event.

There are those who study works of art in books and museums and those who observe them from the walls of their homes: Graydon Parrish is in fact the owner of an original work by the iconic William-Adolphe Bouguereau: among the greatest representatives of classical realism. According to Parrish, today there is a tendency to not understand correctly the question of color, a question that leads to the disproportionate increase of chroma in the composition. Starting from this problem, Parrish gave a masterful lesson in which he addressed the theme of the “three pillars of color”: value, hue and chroma. In addition to practical examples and simplified equations for establishing the components of color, the artist analyzed Bouguereau’s work using (the) The Munsell Book of Color -Glossy Edition-, which he has studied for over twenty years and now teaches his students. A precise system with which to be able to recreate exactly the color of each artistic composition. A difficult but exhaustive lesson that aroused the interest of the audience that defined the artist: “ Such a fine human: a great teacher and a great painter, what a privilege to watch and learn from him”.

Among the convention’s platinum sponsors, LPAPA-Laguna Plein Air Painters Association-is always at the forefront of ensuring the visibility and livelihood of California’s rich community of plein air artists.  A tradition that has been renewed since the late 1800s when the California Plein Air Art Movement took its first steps. Today, LPAPA’s focus is on children with the “Laguna Plein Air Project.” Aimed at the education of the youngest, teachers and members of the association, educate the young audience to the realization of works according to the impressionistic principles that are the basis of plein air painting. For registration and more information visit the LPAPA website at the following link: https://lpapa.org.

That Gabriela Gonzales Dellosso was an exceptional artist participants already knew by observing her works and -for those who participated in the 2019 edition of FACE- watching her portray live the great master Daniel E.Green, who passed away shortly after. In today’s demo, the artist depicted female nudes, one in pencil and one with the “Trois Crayons” technique, dispensing tips and tricks to help find the anatomical references needed to correctly construct the human figure. Starting from the anatomical structure of the model, of clear sculptural approach, Gonzales Dellosso has continued in the realization of the drawing highlighting how her work is not a mere copy of the image but is a personal interpretation made of the feeling and emotion that characterize this artist.

Sarah Margaret Gibson is the director of the Glasgow Academy of Fine Art, which she co-founded with her husband the artist Lee Craigmile, and for Realism Live she created a still life demonstration starting with a grisaille -or monochrome-. The artist, while making the painting, eluded to information about natural light -Gibson’s works dramatically juxtapose natural light with shadow-. Natural light that she prefers to artificial because of the great poetic qualities it offers. To those who ask her if she follows “the rule of thirds” (division of the image into thirds in which the subject is placed at one of the points of intersection of the imaginary lines obtained) or the “Golden Ratio” (the ideal proportions of an aesthetic canon) Gibson replies:” I tend to compose very intuitively, but I do consider the rule of thirds, especially as I work out the cropping on the panel or the canvas”.

Pierre Guidetti and Savoir Faire had two special guests for the “Medium Gel Green for Oil” demonstration: Quang Ho and his adorable baby boy, Liam. Gel medium, manufactured by Sennelier, is designed for artists who want to use dense colors and build depth because it retains the consistency of oil colors without making the product too fluid, allowing artists to layer colors without thinning the bottom layers of color.

Ramiro and Melissa Franklyn Sanchez are a couple in life and in work, and the “Bel Paese” was the perfect setting for them. The story of Ramiro Sanchez and Melissa Franklyn, respectively director of the advanced painting program at the Florence Academy of Art and MIFA -Miami International Fine Arts- and director of the intensive drawing and painting course, as well as art historian -also for the Florence Academy of Art- is a story full of feelings that can be easily deduced from their works and their artistic approach. Interviewed by Peter Trippi who showed her work, Melissa prefers still life, landscape and domestic scenes using copper and aluminum supports and dispensing advice on the use of garlic juice to spread on copper before painting: a tip that her teacher, Daniel Graves, taught her; Ramiro, on the other hand, depending on whether he has to make a mural rather than a stained-glass window or a canvas, makes full-size preparatory works on cardboard and, helped by his assistant Bruno, creates a scale of preparatory chromatic values to be used. Ramiro Sanchez has been commissioned to paint the panels of Saint Bede’s Catholic Chuch in Williamsburg VA: who knows, maybe at FACE- Fine Art Convention and Expo- there will be a chance to admire his work.

For Vincent Xeus, realism is about drawing and lots, lots of practice. “Art allows me to learn the materiality of painting and study perspective and composition in a continuous back and forth. Through painting, the process of discovering things is revealed,” the artist says of himself.

Of Chinese origin, the artist moved to the States as a teenager to study architecture, an element that has influenced his style. Vincent Xeus is an “essential” artist who speaks the bare minimum while making his demo. Xeus argues that often when painting, the value used is not dark enough on human flesh because of the illusion of light. Something to watch out for especially when painting situations with lots of natural light about which he says: “It’s useful to pay more attention to how values affect the overall picture in terms of ‘mood’ and relationship”, argues Xeus, who did a wet-on-wet portrait at “alla prima”painting.

Frank Ordaz, western portrait and landscape painter, was the protagonist of the second demo of Blick Art Material and for the occasion he has completed the portrait of a Native American: through the use of two colors in the realization of the details he has shown how the portrait comes to life on the canvas. Frank Ordaz claims that: “attention to detail is everything”.

The panel discussion moderated by Peter Trippi focused on different topics all related to the pandemic issue that has revolutionized the world, including the art world that has felt the need to “move” towards the digital world. Common denominator for the artists was the need to move toward virtual education, but all in all, the artists’ approach was purposeful: Teresa Oaxaca benefited by making great works of art that were particularly well cared for in the background; Lisa Egeli shifted the focus to making works not necessarily for exhibition and working on old work. It has not been easy for Jesse Lane who is used to traveling the world, but this has allowed him to appreciate human contact even more and to dedicate himself to the study of photography. Despite the tragedy of Covid-19, the pandemic was a good time for Andrea Kowch who became a mom and managed to balance work and motherhood.

Michelle Dunaway’s dazzling smile accompanied participants in the demonstration session held for Royals Talens. In the finishing of a portrait, Dunaway illustrated the salient features of the Royal Talents products she normally uses, highlighting the essential characteristics that guarantee an excellent result.

A visibly excited Eric Rhoads introduced the last artist of the day: Mary Whyte. In addition to the hands-on demonstration, the artist was celebrated for her achievements and presented with the “Lifetime Achievement Award” the prestigious recognition given by Fine Art Connoisseur. A special award given on a special day – Veteran Day. World-renowned watercolorist and Portrait Society of America Executive Board member Mary Whyte represents a living legend in American art circles. A legend born not only because of her artistry but also because of her being compassionate and sensitive to humanitarian causes. Mary Whyte is the author of the great project “WE THE PEOPLE”: a traveling journey of watercolor portraits that touches every state in the US and pays tribute to America’s veterans. A journey that speaks to the duty and commitment of the people who protect not only our Constitution and our country, but our very lives. Mary Whyte is also the creator of the Mary Whyte Art Educator Award, the award given to a visual art teacher in the state of South Carolina who has distinguished herself through her commitment to students and her work.

A great day with a big official closing followed as always by the paint along/cocktail hour.

(On the title: Mary Whyte’s self portrait)


Steward White, will be among the teaching artists

EN-Back for the second year in a row Realism Live,

Craig Nelson will be among the teaching artists in

Last minutes to subscribe at Realism Live. It will

Today is the day of the first annual 'World Skin T

Dan Thompson, will be among the teaching artists i

Third day of Miami Art Week where, after a long wa

Melissa Franklyn Sanchez will be among the teachin

(…) There are those who study works of art in bo