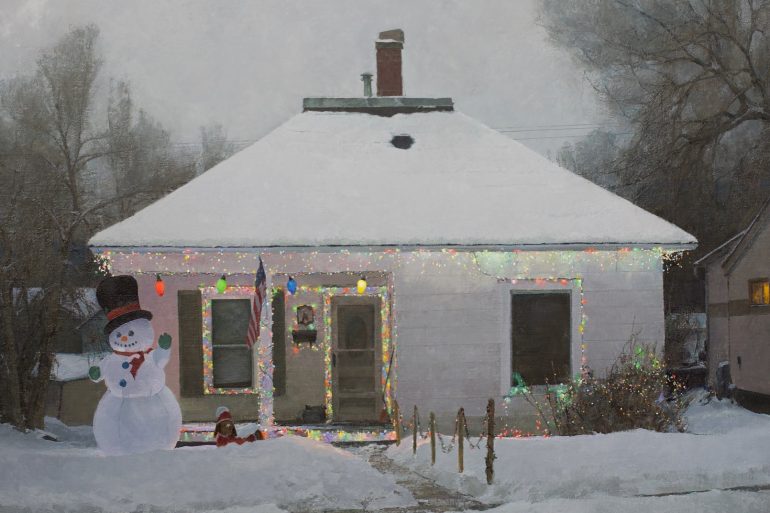 Official start with a bang for the third edition of Plein Air Live, 2022 where a considerable roster of artists have followed, making technical demonstrations during which they have dispensed tips and information about their key to understanding nature and art.

The first artist of the day was John Cosby, a legend in the world of plein air painting, who created an evocative seaport landscape for the event. This is not an unusual subject for Cosby, who after having served two Presidents of the United States of America in the Executive Branch of the U.S. Government, left the White House to devote himself to plein air painting. He did this after restoring an original boat by Nathaniel Herrishoff, a naval architect and designer who lived between 1800/1900. His love for this style led him to found, along with others, the non-profit organization LPAPA -Laguna Plein Air Painters Association. The organization to protect Plein Air painting and the heritage of Laguna, CA, is a platinum sponsor of the event, and wanted to remember Ken Austern, Laguna Beach arts commissioner, who recently passed away.

Before making the final composition Cosby makes it in grayscale in order to evaluate its tonal scale. Cosby’s goal is to create a solid composition capable of evoking emotion. After tracing the large shapes, in charcoal, he used the colors, with a range that alternates between cold and warm temperatures. He pays much attention to chiaroscuro while maintaining the same tonal value, the result of the reflection of light on the surfaces that make up the composition. In the realization of the marine painting Cosby states that he prefers the illusion of details to the details themselves, pointing out how the overlapping of color creates fascinating visual spaces.

Italian artist Daniela Astone has depicted a slice of the divine Tuscan landscape. A student of Daniel Graves at the prestigious Florence Academy of Art, Astone is currently director of the intermediate program at the Academy. In 2016 she was awarded the prestigious Mod Portrait Award at Palau Gomis, headquarters of MEAM- Museu Europeu d’Art Modern, in Spain.

In the composition created for the demo, the artist executed an imprimitura in gesso and linseed oil. With the help of a preparatory sketch she divided the composition into thirds on the basis of which she established where to place the objects and their masses. On the imprimitura with a thin monochromatic stroke she established the block-in highlighting at the same time the lights and shadows and defining the perspective and the relationship between the parts. After the preparatory drawing, perfectly executed – for which she reiterated the importance of drawing – she paints the colors from light to dark with the help of a spatula and according to the tonal composition previously established. At the end of the realization she paints borrowing the technique of pointillism in particular in the realization of the foliage of the trees.  To emphasize the shadows she uses a thicker impasto.

Astone’s painting technique, as she herself mentioned during the demo, refers to the way of painting of De Nittis, Italian painter of 1800, one of the most important representatives of Italian Impressionism. Like De Nittis, Astone paints keeping alive her spirit of draftsman that is evident in the planned line at the base of the compositions.

What is the difference between a painter and an artist and what is the thread -more or less thin- that distinguishes an abstract artist from a figurative artist? These are just a couple of the questions that the artist T. Allen Lawson asked himself in his demonstration session, stimulating the audience to reflect. Reflection that is anything but trivial and that also represents moon of his sources of inspiration from which he draws ideas. Lawson compared masterpieces from the old masters to the most recent contemporary artists, making a classification between abstract and figurative art and focusing on some fundamental concepts in art, including: composition, the importance of drawing – seen as a form of freedom of expression – colors and their harmony and the artistic decisions to be taken to emphasize the narrative. Composition in particular represents for Lawson the most important part of a painting, the sphere that allows an observer to enter the personal dimension of the artist.

Lawson is among the most important artists on the contemporary American scene with a particular curiosity – and extraordinary expressive ability – to capture natural environments and rural scenes with exceptional freshness and skill. Lawson was the author of the 2008 White House Christmas Cards, and he leaves the audience with a personal quote worthy of further study: “I encourage each of you to push the boundaries and try things you’ve never tried before. Try something new. Challenge yourself, push yourself. Because there is no more time to be ‘good enough’.” The audience greatly appreciated his intellectual honesty and meditative depth.  “Lawson has unique responses to life’s encounters interpreted and exposed as universal feelings by one very human artist!” said one attendee.

Nancie King Mertz for the demo depicted the iconic Chicago skyline landscape, highlighting how you can get a beautiful painting from a photographic image. Chicago’s is a landscape that the artist loves to depict, and it’s not unusual to see it in some Chicago-centric television shows, such as Chicago Fire. Growing up in Chicago has allowed her over time to hone a certain sensitivity to light and its vibrant variations that she skillfully transfers to the paper. The pastel method used in today’s demo to create the work was very engaging. Starting from a drawing sketched in charcoal, the artist defined the dark masses that she then blended with denatured alcohol and a fan brush, following the direction of the composition. Taking advantage of the alcohol’s ability to dry very quickly, the artist applied a second layer of pastel which she again blended until he defined the details with small touches that he blended with his fingers. According to Mertz, pastel is all about pressure and the only way to learn the technique is to practice a lot.

Anna Rose Bain delighted attendees with her stunning figurative representation of a child intent on playing on the beach. It is not unusual for Rose Bain to represent children, and the audience always shows great appreciation for this kind of painting, also because live demonstrations involving children are rarely performed. In the complex task of representing children, the artist is undoubtedly facilitated by the presence of her children: Everett (the protagonist of the photo shoot) and Cecilia, a name inspired by the patron saint of music, another of her great passions.  The greatness of this artist -she also studied figurative painting at the Florence Academy of Art- lies not only in her great ability to render extraordinary likenesses of her painted subjects, but also in her ability to represent them in an exciting way, with the freshness and vibrations that distinguish age and plein air painting.  After all, impressionist painting is precisely characterized by the need to perceive and fix on the canvas the “impressions”, the fresh and immediate cuts of light, as amply demonstrated by the French painters of 1800. Her passion for the representation of children is due to two factors in particular: the conception of painting as a sort of diary on which to leave a trace of the events of life, – and therefore of motherhood – and the memory of when she, as a child, spent the day immersed in nature letting herself be charmed and intrigued by the surrounding environment. In the realization of a work in plein air – and of a pictorial work more in general – according to Bain it is important to squint in order to understand what to strengthen in the composition and to pay particular attention to the effect that the temperature of the color assumes to the variation of the light. A very important factor because it allows us to understand that it is the temperature that describes the form of nature offering us a certain perception rather than another.

“It’s truly a blessing to be able to get out and contemplate nature in its essence,” says artist Roger Dale Brown, who closed out the training day by making a stunning excerpt of the river near his home in Nashville, Tennessee.  The artist, says he is not accustomed to working in the short term, as his works take days to complet. In working out the composition,  operates the block-in of short, sharp brushstrokes, in which he begins to render the sense of perspective offered by the masses. For the realization of the work he proceeds from the darkest tones that gradually lighten until obtaining the lightest tones about which he states that there are five types of light:Light shapes, mid tone, dark shapes, reflected light and accents, which are the light and dark.

Brown advises never to discard old brushes but rather to use them to make certain parts of the painting. It is crazy to see how much energy he intervenes on the work, both with the palette knife, with which he homogenizes the colors, and with the brush that he uses in every direction and with a variable pressure depending on the effect to be achieved, such as the edges of the composition that define the atmosphere.

“Train your memory because it will be your main tool,” says artist Roger Dale Brown, who uses the photographic image only in the initial moment of block-in and who says he only paints in nature for the studio and without spending much time on it because: “there is so much to paint in the world,” said the artist.

Among the day’s sponsors were Gregg of Golden Artist Colors who offered Open Colors, acrylics that could revolutionize plein air painting. Open Colors are a professional line of colors and mediums formulated with a set of working properties that stay wet longer, even in outdoor conditions. Their versatility allows artists to explore a broader range of techniques that rely on softening, shading, glazing and creating fine detail, much like they do with oil. Their formula also allows you to avoid waste because of the color blends are usable for longer.

The day has come to an end and we at Miami Niche are looking forward to the next day of Plein Air Live. Stay tuned.