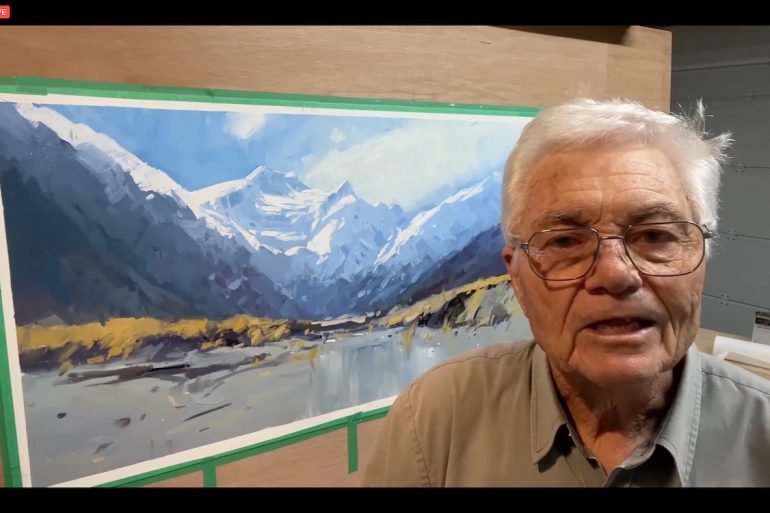 Eric Rhoads is always a raging river that thinks one thing and does a hundred. He is the creator and founder of some of the most extraordinary American art events and magazines. After all, his motto is, “We’re showing the world how to make, sell and collect art.”

After two years of restrictions due to the pandemic Eric Rhoads and his tireless team have finally decided to return to in-person events. Online events will still continue to be held so that the worldwide audience can have the opportunity to participate.

For all Plein Air lovers, Eric Rhoads and Kelly Kane have scheduled several meetings in some of the most beautiful landscapes of the United States of America and beyond. Among them: PACE -Plein Air Convention and Expo- in Santa Fe, NM, May 17-21, 2022; Adirondack, NY, June 16-22; Fall Color Week, at Acadia National Park, ME, October 6-13 and New Zealand, in September, with dates to be determined.

The day got into the thick of the demonstration sessions with Anne Blair Brown showing a fresh approach on how to create a plein air landscape indoors in a studio. Painting in nature is always very difficult because of the multiplicity of stimuli that nature offers and the variations in light that impact the composition. In order to overcome this problem, Brown makes use of some useful tools to refresh or set up her memory during the short outdoor plein air session: sketches and counter sketches, shapes, value notes and tonal underpainting. In this way she can realize the final composition in her studio. In this way her memory helps her in the compositional process without fearing that spontaneity will suffer. Borrowing a quote from Claude Monet, Brown states that: “No one is an artist unless he carries his picture in his head before painting it, and is sure of his method and composition.” She makes the composition in oil, with underpainting. This is a very important process because it serves to simplify the compositional process and, while it seems like an abstract process, it reinforces the concept that in painting every brushstroke counts and gives life to a form. Brown tries to keep all the brushstrokes dense in the opaque lights.

“Photographs are great references but they must remain so because it is up to the artist’s sensibility to interpret the scene,” says atmospheric master David A. Santillanes, who created a very unique composition of Dark Hollow Falls in Shenandoah National Park, VA, choosing not to depict a tree in the foreground to emphasize the waterfall. It’s a scene that seems almost evanescent and palpable and whose blurred lights and haze make it almost a black and white image. The artist pays a lot of attention to palette organization because he claims that an orderly palette saves time and helps in managing the process. During the making of his demo he presented his interesting theories about color. According to Santillanes it’s not necessary to try to faithfully reproduce a color but rather it’s necessary to find the right relationship between colors. In the composition he made an underpainting of temperatures. This is a very important process for the artist because it helps him to address at once issues such as: atmosphere, values and composition before the details make them more difficult to handle. He then continued with drafting by “atmospheric layers”: a grayscale that has alternating slightly warmer tones to slightly cooler tones and finally the details. Santillanes explained, arguing, themes that are difficult for an artist to grasp, among them, the linear versus the shapes; the edges and their physical and perceptual quality for which it is necessary to squint as one does with the search for tonal value.

Jacob Dhein’s approach to painting is that of a modern impressionist. From Andalusia, Spain, he made a seascape in the company of wind and seagulls in the background. For the demo he worked on a panel covered with 3-4 layers of gesso on which he made a blocked-in sight size. In the sight size drawing it is essential to constantly check the measurements and proportions, otherwise the composition will be unsuccessful. Dhein, realizes his works with the help of various tools: brushes, spatulas but also brayer and squeegee that allow him to lash bold strokes to which alternates layers of thin color to layers of pasty color. Brushstrokes that make the composition vibrant.  The artist uses an interpretive color that remains constant throughout the composition as he declares himself more interested in suggestion than the mere representation of the scene. In this process he considers underpainting fundamental, as it helps him to create the mood more than colors can. The definition of forms in his painting leaves the viewer with the possibility of seeing the process from the first to the last brushstroke in a continuous superimposition.

Ryan Jensen is literally a tsunami and a self-described “positive mindset.” An energetic artist with an abstract impressionist style Jensen was highly sought after by the public last year during the second edition of the event. After spending eight years in the Marine Corps defending his country in Afghanistan, he returned to school and majored in painting. For the demonstration, he created two paintings at once, one of them large (5 x 5 feet).In practice Jensen, is in a constant “hunt for light” and its contrasts, about which he says it is essential to let the painting speak to the artist.  His dynamism, excitement and spontaneity are a burst of energy that goes far beyond the canons to which the making of a work of art has accustomed us. The very way he distances himself from the palette is a far cry from the rules taught in school. According to Jensen, it is important to overcome one’s fears and to dare to experiment, because only by believing in oneself will the combination of light and shadow, the combination of colors and complementary shapes be true. His pathos and his impetuosity lead him to have sharp reflexes even in the correction of errors which he remedies without much hesitation. “I needed an injection of your energetic and instinctive approach! This is wonderful!!!!,” said one participant.

Bill Davidson was a successful lawyer who decided to take up painting at an older age. This may be why his teachings get right to the weak points of those who approach the art of composition. Bill Davidson is a master in the art of tonal and chromatic composition that he makes starting from a neutral underpainting. To do this he uses gray and prepares three shades of gray: light, medium and dark, to mix with the colors, as demonstrated in his depiction of waterfalls in Yosemite National Park. “Starting from a palette of gray allows you to better establish tonal values,” declares the artist. Reiterating the rules of color harmony such that in order to have a correct composition when one color varies, it is necessary to vary the others, Davidson argues that “Values do all the work and colors take all the credit.” Or so it has always been taught. In reality, tonal values are essential to creating the mood of a painting. Having learned the importance of color intensity Davidson reiterates the importance of simplifying shapes to have good design. Another component in creating a successful composition is alternating warm colors with cool colors. By carefully observing each level of depth in Davidson’s painting it is in fact possible to see the changes in temperature.

John Crump, is an award-winning New Zealand impressionist artist who has led the public to love the magnificence of the snowy mountain landscape of Rees Valley, New Zealand. The artist, who in reference to his homeland claims to be “working in paradise” makes a brush drawing in a cerulean blue. A familiar color for those who know the atmosphere of New Zealand, where rivers flow in a grayish blue-green color due to melting glaciers. Blue is also the protagonist color of the composition that the artist keeps constant in the realization of the work. Work played almost exclusively on tonal values with spectacular brushstrokes that add atmosphere to the paintings. “Atmosphere and light are what inspire many of us to paint, but it can take many years to achieve convincing atmospheric and lighting effects,” Crump states.  Another very important factor in composition is to prefer a focal point that is outside the center of the composition. This keeps the viewer from getting bored, instead sparking interest. In making the painting he proceeds from dark to light, controlling the edges and defining light and shadow in a very dramatic way.

Among the day’s sponsors were several artists who presented products and techniques, including Jed Dorsey for Blick Art Materials, who talked about light and focal point; Tom Horn for Royals Talens North America; and Richard Lindenberg for Savoir-Faire, who did a demonstration of the magnificent grays achieved by mixing Sennelier oil colors.

(On the title the John Crump’s magnificent demonstration) 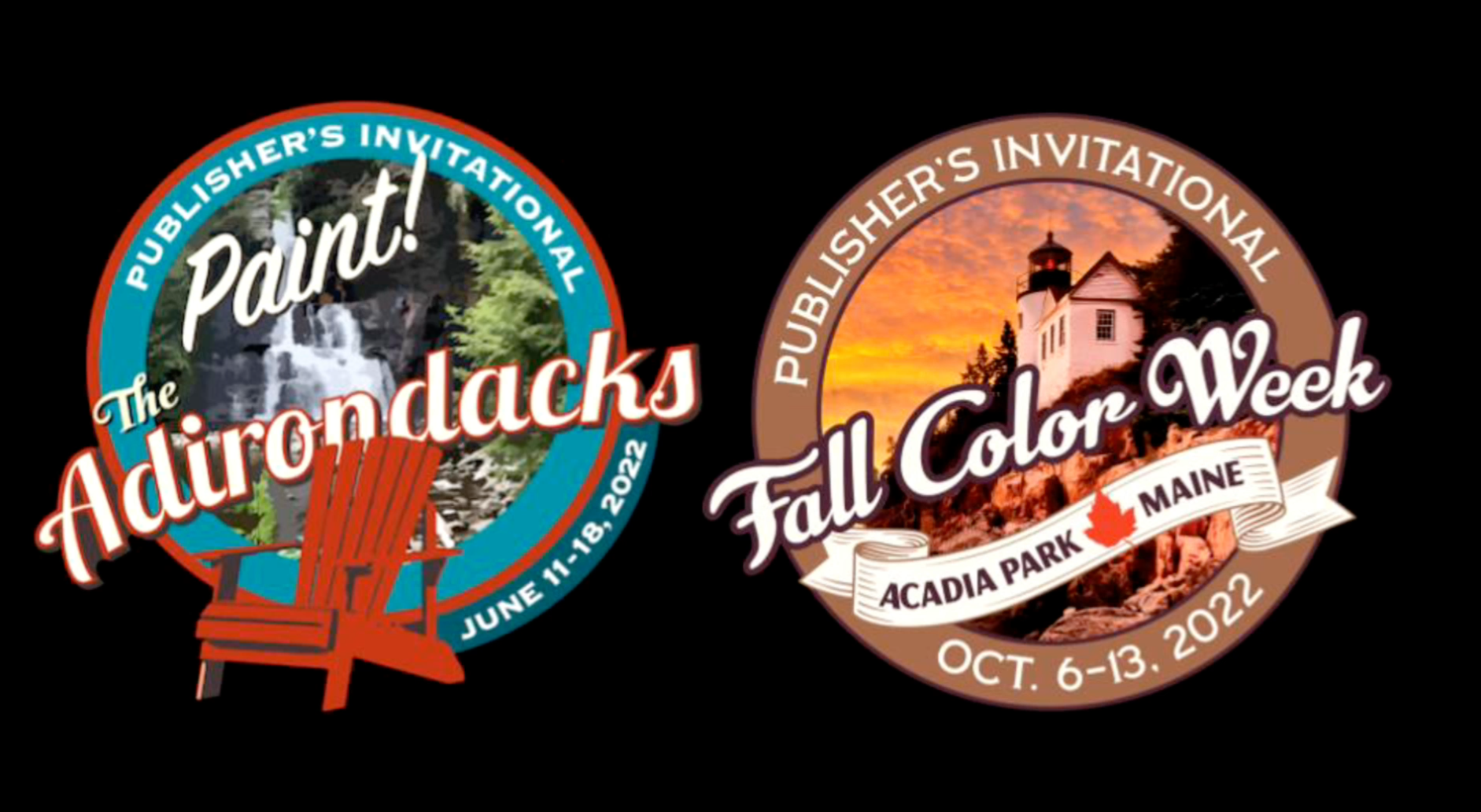