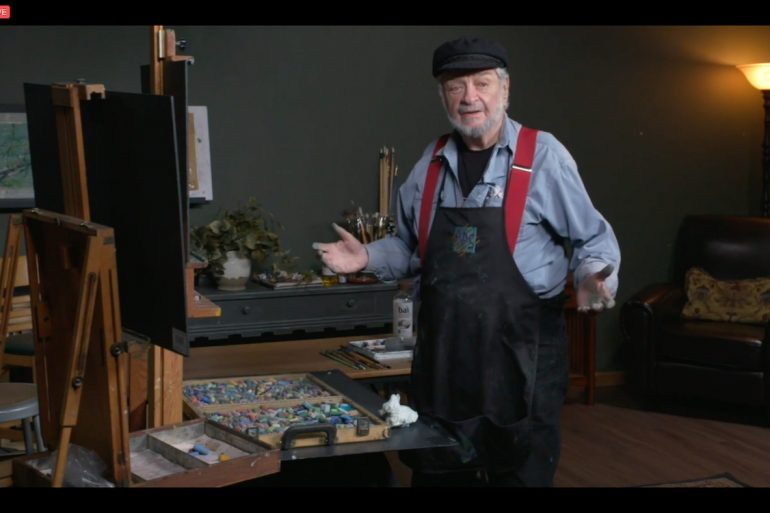 Credit and praise for all of this goes to Eric Rhoads who, with Kelly Kane and the hyperactive Streamline crew, made this much-needed event possible for attendees at all previous conventions.

Vera Kavura, an artist of Ukrainian origin has become fond of pastel in recent years, nevertheless her skill is incredible. The artist likes to paint flowers live, without preparatory sketches and taking advantage of the flat surface of the table. For the demo presented today she used both soft pastels and Pan Pastel (special pastels whose name refers to the shape of cakes) that have the prerogative of blending very well. After hinting at the shapes with touches of color she hinted at the natural structure of the flowers, because, as the artist says: “It is nature itself that tells me how they should be”.  It is only towards the end of the work that he reinforces the contrasts of the composition and edges with “brushstrokes” of Pan Pastel adding intuitive details that emphasize the volume and strokes of light.

An incredible demo to the point that by observing the flowers it seems possible to reach out and take them, and it’s no coincidence that in the “Silence Auction” (the exclusive auction for participants in the event that allows you to buy the works of the demonstrating artists) her peonies sold out immediately.

Clarence A.Porter’s demo proves that you can see the beauty of nature anywhere, even on a street corner. After years devoted to illustration and graphic design Porter abandoned his career to devote himself entirely to pastel and teaching. In his landscape demo, Porter begins by drafting colors into large shapes that he later watercolors with 99% alcohol, on which he then works with a variety of soft and hard pastels in crafting the shapes and details. It’s interesting to listen to him explain the why of his passages, just as it’s useful to watch how he moves the crayon: “It is up to the sensitivity of the artist to handle the pastels in such a way as to bring them to life on the paper. Twisting your pencils in the drafting of the stroke: in this way you will make the image vibrant and alive.”

Mike Beeman is a Master Circle artist in the International Association of Pastel Societies . It really is true that the versatility of pastel allows everyone to have their own style that works equally well. Beeman’s is to use the same colors in the subject and background and to proceed with the pastel by zones. After covering the surface using a brush dampened with 70% alcohol “paints” blending the colors zone by zone. When the sheet is dry he work with pencils for details. And at the end of execution he recommends: ”You can’t be afraid to made mistakes because fear is the kiss of death for creativity”,

Barbara Jaenicke’s perseverance has led her to pursue her artistic career full-time, dedicating herself to the creation of impressionist-style landscapes in both oil and pastel.  This determination led her to earn the title of Master Pastelist in the Pastel Society of America and Eminent Pastelist in the International Association of Pastel Societies. Pastel painting begins for Jaenicke with the creation of a sketch that she uses as a reference for the actual work. This is a process that the artist considers fundamental to be able to connect the forms and understand how to proceed in the composition. After having made an underpainting with a few colors: dark blue, violet, pink and orange, with a brush moistened with alcohol she literally touches the sheet letting the color drip in a random way. Value, temperature and chroma are the parameters that she uses later to refine the work.

After enchanting the audience with his watercolors Mario Robinson sent the participants into raptures with his fascinating and unusual pastel technique. Robinson had already given a hint of this technique in the demo made by Savoir-Faire earlier in the morning, but his demonstration made it all clearer. Proceeding with cross hatching consisting of horizontal lines alternating with vertical lines from the inside to the outside of the face, she spreads four layers of extra soft crayons and five layers of hard crayons over the surface. From the very long and precise process – the complete realization of a portrait takes up to a month – and from the superimposition of the layers in this order, constant and precise for each color, emerges a kind of sculptural accumulation on the surface of the paper that guarantees the volume of the face and the adherence to the real colors in a truly exceptional way. Asked how he came up with the idea of working with pastel in this way, Robinson replies: “ It was a natural way of working after trying to use larger sticks. I was looking to exert more control over the pastel. It is a long and delicate process of continuous push and pull and for which one should not be in a hurry.

The audience has already had the opportunity to get acquainted with the artistic talent of Susan Kuznitsky during the demos produced for some sponsors. In life, Kuznitsky has been a studio assistant to the great master Albert Handell – who officially closed the second convention day – from whom she learned not only how to use oil and pastel but also how to teach, so what better faculty member could hold a critique session analyzing nine papers from among those proposed by the participants? However, the information imparted by Kuznitsky was useful to all participants. Susan Kuznitsky made it clear that photography is not truthful, so it is recommended as a reference taking into account knowledge and experience.

It is well known that all great artists who have left a healthy mark have passed through the Art Students League of New York, and so it was with Albert Handel. Legendary master Handel needs no introduction both in the world of oil and pastel for which he pioneered the extensive application of pastel for plein air painting. Suffice it to say that he was the third living American artist to be inducted into the Pastel Society of America’s Hall of Fame.

The seventy years of experience and an unabashed love for trees about which Handel says:” the tree is not in the photo; it is inside me”. This statement, along with others, makes this character quite unique. The artist, who prefers to leave white spaces in the composition to encourage a sense of space, considers a tidy palette boring: “While I was learning values and colors I was very organized….But now that type of tight organizing puts my eye to sleep…I prefer being more like an eagle”.

A legendary artist and a curious character ended the second day of Pastel Live on a high note.