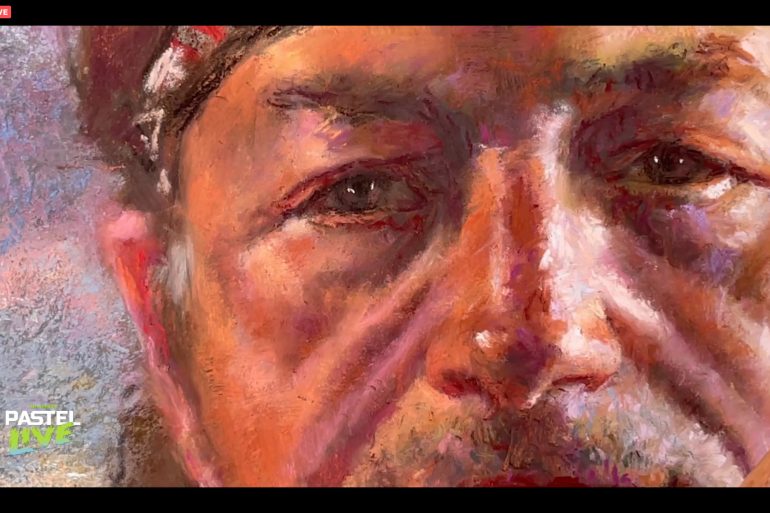 Organized by Kelly Kane and the unstoppable Eric Rhoads, celebrated face of magazines and art events, Pastel Live began with a jam-packed lineup with demos of: landscape, portrait, still life, plain-air, floral and seascape, punctuated by technical and historical notions about pastel.

The first artist of the day is Scottish artist Tony Allein who has created two Scottish landscapes.

In the first landscape, which depicts a Scottish sunset over a lake, violent edges alternate with lost ones, while the contrasting-colored pastel strokes Allein mixes with the palm of his hand bring out both the sky and the lake, which seem to compress the mountains between them, giving the audience a glimpse of Scottish colors. Extraordinary is the winter landscape of the second demo in which it seems to perceive the “gravity” of the snow resting on the poles.

Precise knowledge of human anatomy is the basis with which artist Gwenneth Barth-White sets out to create a live portrait.  According to the artist, “Portraiture requires going beyond, looking for the connection between the parts, more than any other subject.”

In fact, the planes of the head have an essential importance in the composition of a portrait.

The work created by Barth-White in addition to being extraordinary with all those small strokes of color on top of each other, is very emotional: “You can feel his soul,” says one participant looking at the finished work.

Regarding the multiplicity of overlapping colored layers the artist says: “Getting the color is sometimes a treasure hunt. I always feel that way”.

It looks like a cubist work the construction of Alain J.Picard’s pastel drawing of a still life demo.

Neatly organized, Picard says: “Organizing material is a strategy that saves a lot of time and helps build the palette”.

His demo starts from the study of perspective, and drawing more generally, which he performs in vine charcoal and continues in the construction of the layers of color with sharp and thick pastel strokes that proceed from dark to light, from thin to thick.

“In this way, the dark values anchor the scene without altering the value scale and keeping the color rich and beautiful”, declare the artist. In the making of the pastel drawing Picard reiterates the importance of hand pressure in the application of color: the artist begins with a light hand so that he can layer overlapping strokes which he then mixes with a paper towel softening the edges that create atmosphere.

Peters Adams -since 1993 president of the historic California Art Club- brilliantly illustrated his pastel work in the creation of a seascape.

In his demo the artist believes that the reference to photography is important but not fundamental because he states that he does not paint objects but atmospheres working simultaneously with shapes, values and colors.

Stephanie Birdsall is among the best artists in the representation of flowers: for her peonies she started from drawing with light pastel and a limited palette. The palette is inspired by the teachings of the recently deceased great master, Richard Schmidt in writing “Alla Prima”. Each touch of crayon, laid down taking advantage of the various physical facets of the crayon, is lightened and blended into the rest of the composition with an alcohol-moistened brush. When the whole works she refines the shapes and defines the edges.

“Pastel is my world. It is the purest painting medium in nature,” says Pierre Guidetti, co-founder of Savoir-Faire and Advisory Board of the Pastel Society of America.

Who better to introduce pastel and its history than the man who introduced the extra soft crayon brand Sennelier to America in the 1980s? Pastel is the oldest and noblest pigment in history, it had a revolution with the flattening of glass to make windows.

This event marked a turning point in the use of the medium, and even today glass is the safest means of preserving pastel over time.

Since then, many big names in the panorama of art history have approached this medium.

A use that continues today with other great contemporary protagonists: William Schneider, Wayne Thiebaud, Botero, Margaret Bowland and Albert Handell, to name a few.

The first official day of Pastel Live ended with a seascape demo performed by Lana Ballot, who is in love with the sea and the ocean.

Starting with the initial reference image of a wave ready to hurl itself across the waterfront, it’s crazy to see how the initial drafting process seems to seemingly have nothing to do with the final image, which slowly transforms before the viewer’s eyes.

Through the movement of the stroke, the variation of the value and temperature of the color and the knowledge of the medium, the artist is able to put everything in relation until she reaches the harmony of colors and the desired rendering.

After the official closing of the day Pastel Live continues with the “Paint along” and the “Cocktail time” that every evening engages the tireless pastelists in a section -virtual- group that continues until late.