Miami is artfully dressed with Art Wynwood from February 16th to 19th, 2018 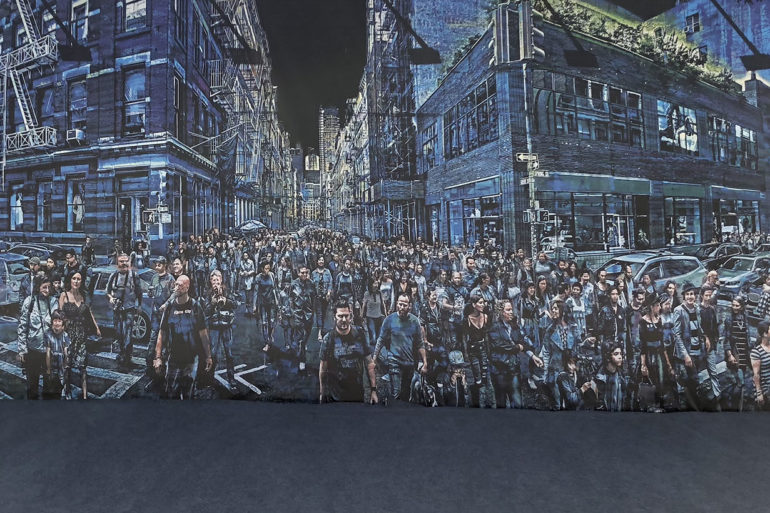 After the Miami Art Week in December, the city returns to become an influential artistic destination, as well as a touristy one, with Art Wynwood: modern and contemporary art fair produced by Art Miami LLC. It takes its name from the famous and prestigious district of the city , Wynwood. After hosting 36,500 visitors last year, for this seventh edition the event was set up in the broader One Herald Plaza, formerly home to Miami Art, and CONTEXT in December 2017. 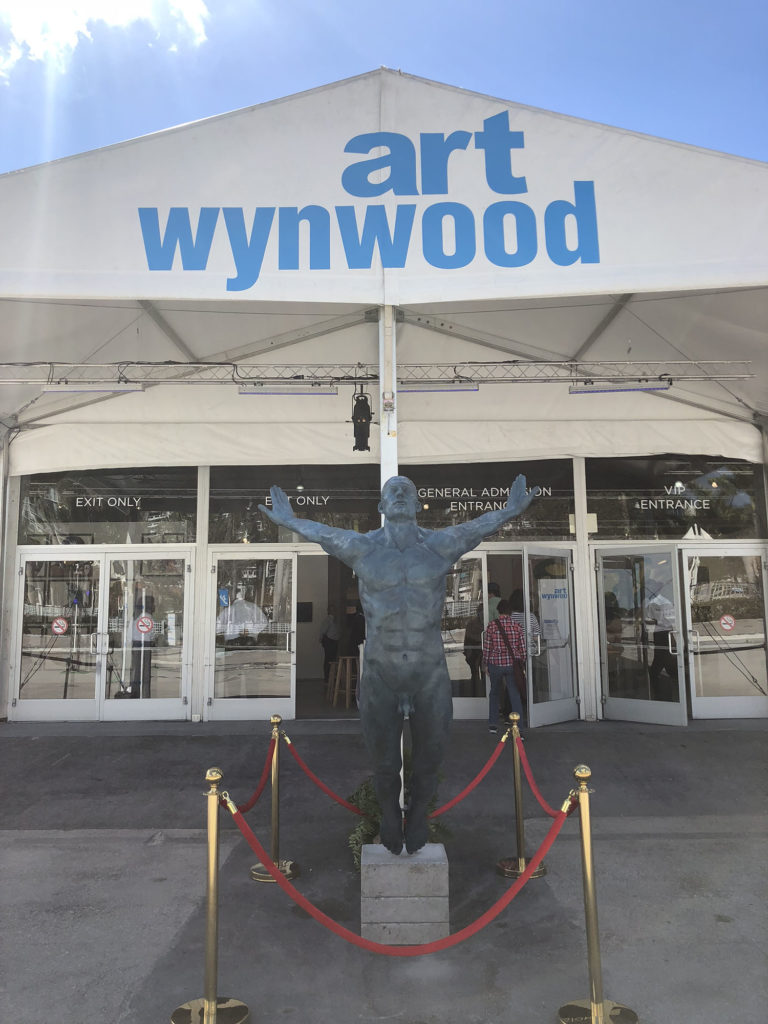 The exclusive trade fair opened on February 15th with VIP access sponsored by the Miami Institute of Contemporary Art (Miami). It offered members and cardholders the opportunity to make the first choice on the art market exhibited at the fair. On the contrary, it was opened to the public from 16 to 19 February, during the President Day weekend. Some of the sponsors at the event were artsy.net, official online partner, and for the first time as Leader Sponsor, the luxury International Real Estate Christie’s that during the event showed, in agreement with the top affiliates, the best properties in the world. The fair offered the opportunity to get to know and buy works by emerging talents from the contemporary market, post-war masters, modern and blue chip art.

The term blue chip is commonly used in the stock exchange, but it was borrowed from gambling parlance. In poker, in fact, the blue chip (blue token) is the one with the highest value, and it is used in the art market to indicate reliably profitable works of art that will increase in value, regardless of the ups and downs of the market. 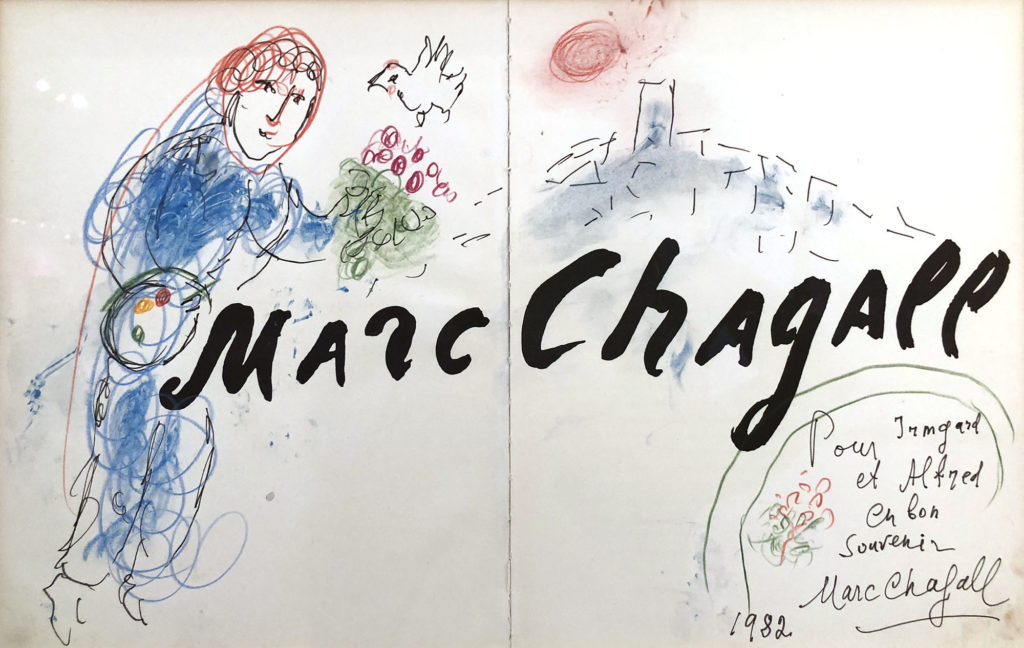 With over 50 galleries and a variety of artists, this year the eyes were on Logan Hicks, New York street artist, fourth winner of the Art Wynwood Tony Goldman Lifetime Artistic Achievement Award.

Talented artist Logan Hicks, whom elaborates the dynamics of urban development, working on multiple layers of stancils, even using 10/15. His particular attention to detail is due to the masterly ability to use the spray can and the precise knowledge of color rendering with which he manages to make the images reproduced dense of vivid realism. 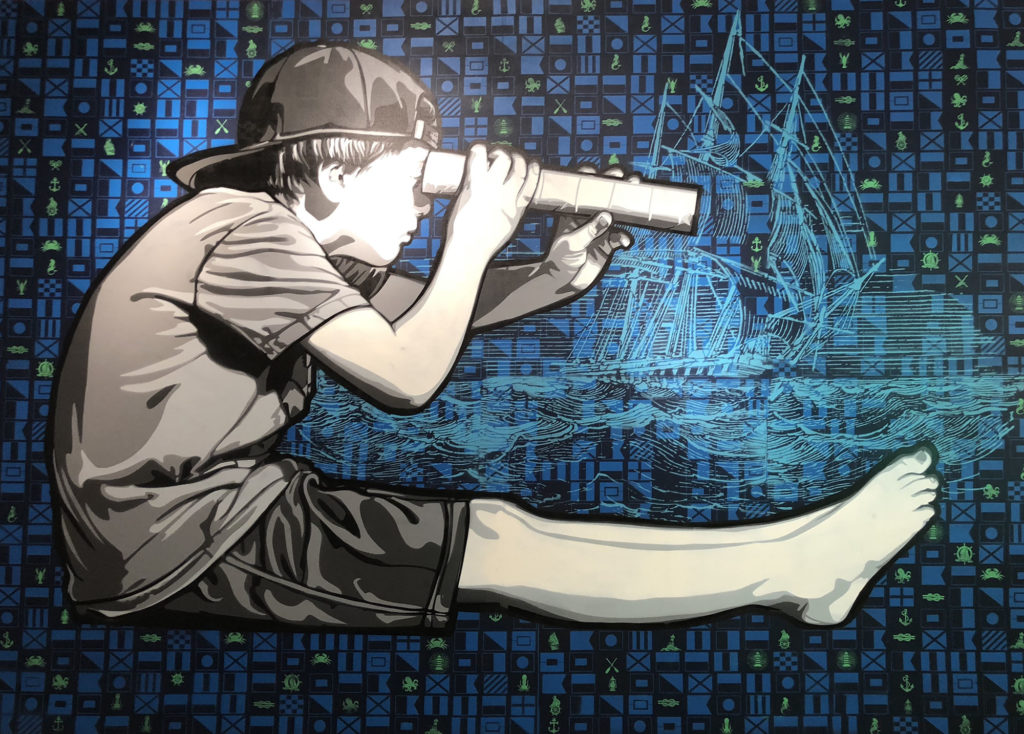 The coveted “Tony Goldman Lifetime Artistic Achievement Award” goes to the memory of Tony Goldman, who died in 2012. Tony Goldman, real estate owner, was much more than this: he was a visionary artist who has been able to transform Wynwood and its street art, in the district which it is known for today. Wynwood presents itself as a great canvas for street artists, an authentic congregation area to explore, inspire and be inspired by. In the same way Tony Goldman transformed Soho in New York and the 13th street in Philadelphia. The Wynwood Walls, in particular, in 6 years have given life to one of the greatest artistic movements, street art, elevating it to the point of being able to change the paradigm of interaction between art and the people that hang around it: artists, enthusiasts, collectors and gallery owners, to the point of becoming a focal point to which to refer to the changes that take place in the world of street art. Wynwood Wall has seen over 70 artists come from 20 countries around the world who have covered over 85,000 square feet, something like 8,000 square meters, of pure art. 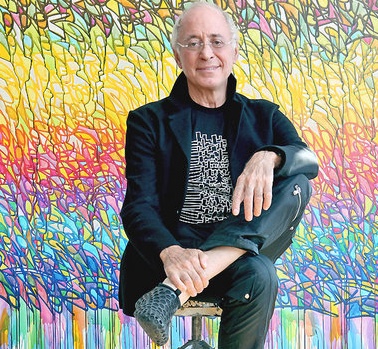 Since ICA Miami promotes the development of art in all its forms, always looking for novelties, there are many different artistic forms from the canonical painting on canvas, among these the Italian, Brescia to be precise, Stefano Bombarderi on show at the Mark Hachem Gallery with headquarters in Paris and New York. The artist, who participated in the Venice Biennale, works habitually on a large scale and has made his work in bronze of small dimensions but with a great emotional impact given the disarming realism of the harnessed elephant and the poetry of the child that supports him in “Matthew and the elephant”. 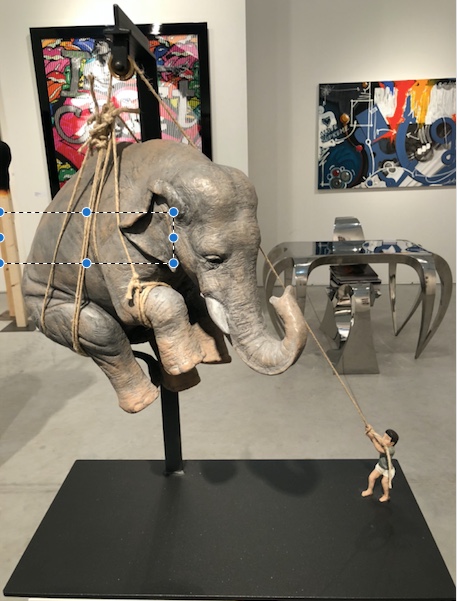 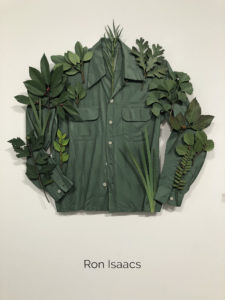 Jeannine Marchand, also from Momentum Gallery, an artist from Puerto Rico, in “Folds LXXXV” has transformed clay, steel and wood into a light and harmonious drapery able to satisfy sight and touch. 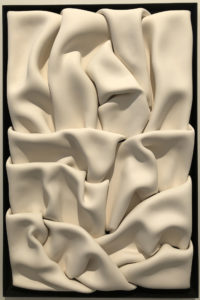 Andrew Myers in his work for the Cantor Fine Art Gallery “Opposite attract” has given shape and color to 7000 screws each of which has been individually painted to create the image of the artist who is attracted by a magnet, a wonderful day of anecdotes . 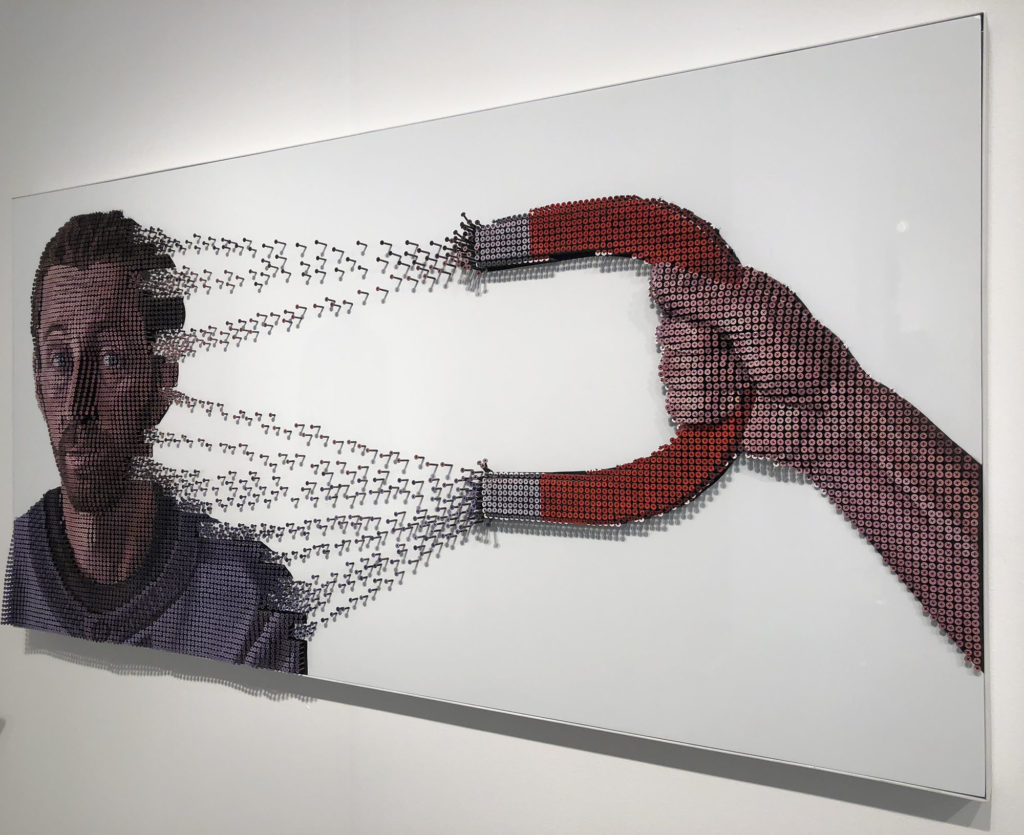 As seen during the Miami Art Week, oriental art is on the increase, probably due to the fact that Art Basel has opened its doors also in Hong Kong. This causes collectors to move towards other destinations. The Gallery Tableau exhibited works by the Korean artist Luchio LIM with “Story”, a work composed of thousands of blackberry leaves cut out, hand painted in shades of black and white using Chinese ink and bent to create a 3D piece. 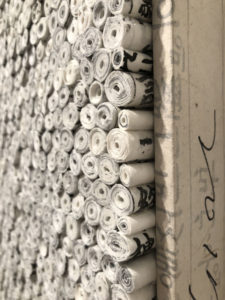 Benjamin Cañas, for the gallery Rojas Ford Fine Arts, seems to want to establish a contact that leads the viewer to live fantastic stories through his works that could inspire in the writing of fairytale stories.

Equally magical is the art of Kerry Miller and his book sculptures in “Strand Magazine, vol.13”, which brings us back in time with the actualization of literary works that seem to magically take shape out of the book. 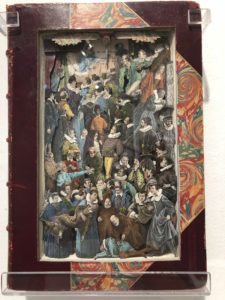 There were also works of social commitment such as that of the non-profit foundation, of the Perry J.Cohen Foundation, founded by the mother of Perry J. Cohen, who disappeared the sea with friends in 2015, pointing, with the sums collected from the sale works of art, the study of art, education to the marine world, enterprising in the world of adolescents and not less, given the motivation that led the mother of perry J.Cohen to educate about the safety to keep when boating. 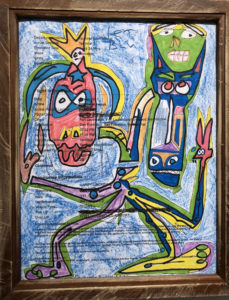 The work by Ernesto J.Fernandez “Cuba”, originating from Cuba, depicts scenes of Cuban daily life seen through a bottle of Chanel perfume, Chance, a provocative word of hope that highlights the still precarious conditions of the Cuban people as opposed to the luxury brands that have opened boutiques in poor countries where the entry is not allowed to the locals. 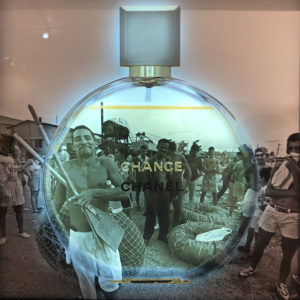 And finally, the works of Luis Valenzuela, eco-fashionista who, through art and fashion, emphasizes the importance of protecting the environment by producing clothes with recycled paper or natural fabrics.

2 thoughts on “Miami is artfully dressed with Art Wynwood from February 16th to 19th, 2018”