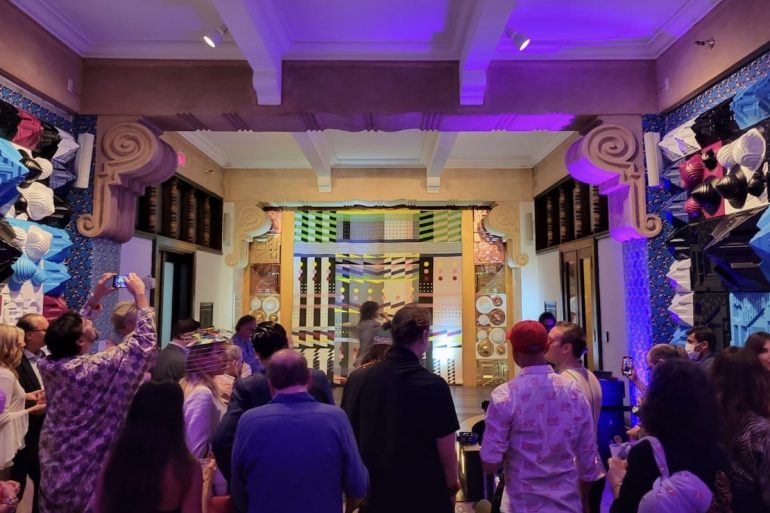 The day on the beaches and under the sun of Miami Beach begins with SCOPE.

SCOPE is an institution in the American art world: it boasts 75 fairs spread over years of activity and held in Miami, New York and Basel. In its 20th edition in Miami Beach, the fair counted 140 galleries from all over the world with cumulative sales in excess of a billion dollars and the presence of 1.2 million visitors.

These large numbers are due to the fact that SCOPE possesses an extraordinary ability to predict new visual trends, a factor that makes it a true artistic showcase for emerging contemporary art as well as multidisciplinary creative programming.

Honoring its mission of wanting to provide an experiential platform for digital discovery, the 2021 edition featured “Immersive Miami Beach”: the invitation-only, in-person and online themed event that presented collectors with a unique opportunity to explore and purchase artwork from thirty-five remote exhibitors in a digital and interactive space. The first part of the event -split into two sections- was a huge success and welcomed over 19,100 visitors from 72 countries and 987 cities. Among the stars of Immersive Miami Beach is (the) The Contemporary Art Modern Project founded by Melanie Prapopoulos, former creator of The CAMP Gallery which is based in both North Miami and Westport, Connecticut.

For the event, Prapopoulos presented the works of Italian Elena Monzo. Melanie Prapopoulos’ one for Italian artists is a real passion, which had made the protagonist, in the 2019 edition, the artist Stefano Ogliari Badessi. Speaking of the artist, Prapopoulos says, “What I enjoy most about Elena Monzo’s art is the beauty of each piece, the raw sexuality all coupled in a playful carnivalesque language.” Monzo’s works, in which female figures predominate, are a representation of the ephemeral society with its inadequacy in conforming to the standards of mass culture, the maniacal attention to detail. The artist’s goal is to emphasize the decadence of society totally fixed on aesthetic rules.

For this year, given the evolution of social interactions in the wake of the COVID-19 pandemic, SCOPE had as its Official Crypto Sponsor, Abra: the official cryptocurrency platform that aims to have a simple and honest space to allow millions of cryptocurrency holders to maximize the potential of their crypto assets. Host for Abra was Mister E with his work “Rain Technicolor 100s.” Known around the world for his iconic colorful interpretation of the US $100 bill, “Benny Jr.” and the phrase “Money Isn’t Real,” the artist created an immersive installation that combines the physical and digital worlds, allowing visitors to physically walk through an NFT.

The 2021 edition of Miami Art Week shone a spotlight on the African-American scene and the African diaspora in general, but among the fairs in attendance, Art Beat Miami was met with public acclaim. Now in its eighth year, Art Beat Miami is the satellite art fair presented in conjunction by the Little Haiti Optimist Club and Welcome to Little Haiti, showcasing emerging and renowned artists from Haiti and around the world. Participating artists include Alain Georges -aka Mindgasum- who sold one of his paintings during Miami Art Week to rapper, producer and entrepreneur Krayzie Bone.”I’m grateful for those who never gave up on me and still believe,” said Alain Georges.

The day could not have ended in a better way with the exclusive party at the iconic Wolfsonian-FIU. For the occasion, the museum presented the “Aereal Vision” exhibition, which celebrates the inventions of the 20th century: airplanes and skyscrapers, once considered the embodiment of human achievement and which, though greeted with awe, sparked an era of remarkable creativity and new ways of seeing the world.

For fans of engines and history, the “Lamborghini Countach” was on display in the halls of the museum. The legendary car that, with its fifty years of history, has simply captivated the public of enthusiasts and the curious, while at the same time introducing the theme, more topical than ever, of sustainability.

However, the spotlight was on the opening of the Shameless exhibition in collaboration with Dr.David & Linda Frankel who invited Dutch artist and designer, Bas van Beek, in his debut on the Floridian scene. The artist, known for his dynamic repurposing of historic design and approach that explores the relationships between the “old” and the “new,” transforming admired and familiar artifacts into fresh and contemporary works, created for The Wolfsonian a set of colorful patterns that he combined with the richness and variety of existing material. “Exactly fitting my interests, The Wolfsonian has a vast collection and is one of the rare institutions that chooses to collect and preserve works of often-overlooked cultural value. It was exciting to find so many works in their holdings that feel as contemporary as they are modern, like in the design drawings of Wilhelm Poetter that became fodder for my new, Wolfsonian-specific tapestry work, which evokes the effect of a computer glitch.” said the artist who was followed by Silvia Barisone, chief curator of the Wolfsonian, saying: “He is ‘shameless’ in his provocative approach that goes beyond time, genre, and geographic boundaries. He never hides his source of inspiration; on the contrary, it becomes part of his creation.”. Among the various works proposed by the artist-designer are: “5xWP” a tapestry commissioned by the Wolfsonian based on the modernist textile patterns of Wilhelm Poetter and designed to be woven by Odabashian of Miami, and a 3D printed teapot, based on a 1907 design by Mathieu Lauweriks.

(on the title: The Art Basel VIP soirée and presentation at The Wolfsonian-FIU)


Watercolor Live will coming back, from January 27t

(…)The conventions organized by Streamline Publi

The Patricia and Phillips Frost Art Museum in Miam

Rainy day today in Los Angeles… Any excuse is go

(…) Ruth Burotte also created a mural for her so