Last day of the 22nd Convention of the Portrait Society of America among the legends of American contemporary art and much more. 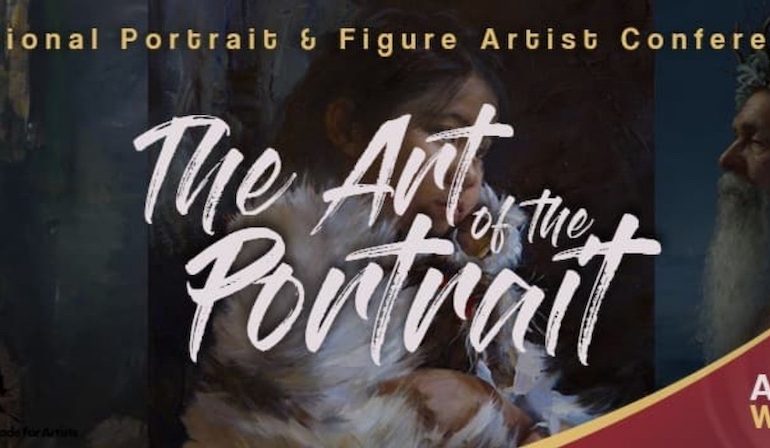 The last day of the Portrait Society of America ended with a sort of retrospective on two great figures of the American contemporary art scene: Burt Silverman and Daniel Sprick, who join the other great character, Richard Schmid, interviewed yesterday by Michelle Dunaway.

The morning started with some technical hiccups that partially precluded the vision of Mary White’s presentation about the business and its mechanisms, among which: what are the parameters to take into account to attribute the price of a work, the need to have an agent or not, and other issues of practical interest that artists have in common. Not bad considering the fact that the Portrait Society of America will make available from tomorrow, September 1, the vision of all sessions of the entire convention for a month. A great opportunity also for those who in the afternoon found themselves forced to decide which session to follow at the expense of the others.

The first illustrious guest of the day was Burton Silverman, legendary character and already presented in an exciting retrospective at another convention held in Miami in 2018, Burton Silverman told about his life, his sources of inspiration and his inspirational muses, dealing above all with the theme of women who, starting with his mother and then with his wife, were among his favorite subjects.

Just as Vivaldi was often inspired by women in the composition of his works, so did Burton Silverman with art and as other great artists of the past have done. Silverman mentions J.B.Lepage and Degas who interpreted women in different ways, or Whistler with the portrait of his mother, and so many others.  Silverman’s paintings are a careful examination of the everyday world that surrounds us: hic et nunc, and which manifests itself in the works, in the faces of the women he met in his daily life. The mother, the women who work in the domestic chores: ironing or sewing by machine; but also women with a hat that can look different even though they are the same, women observed in profile, from the shoulders but also nightclub dancers.

His subjects include a repertoire of real people whose existence often transcends clichés, representing for the artist larger issues and deeper emotions such as the Tuscan lady who went to fetch water from the well. Tuscany, Marina di Pietrasanta, with its characters, the land loved by the artist who frequented for 11 years.

Through his works Silverman has managed to profile the path of women, in society, their essence in the passage of time, making his work universal because, as the artist says, “Women always give something wonderful and unexpected. Burton Silverman has been a member of the Portrait Society of America since 1999, in his lifetime he has exhibited in over 40 solo exhibitions, winning awards, honors and recognitions including the Ranger Purchase Awards in 1965 and 1983. His works are held in 32 public collections and are part of important public and private collections. Since 1993 he has lectured in museums and degree courses on the theme of realist art.

The early afternoon continued with demonstrations by David Kassan and Shana Levenson who explored the complexity and differences in representing the figure of a child compared to an adult. David Kassan is the talented artist who created the magnificent “Facing Survival” project, realized thanks to The USC Fisher Museum of Art and The USC Shoah Foundation in honor of Holocaust survivors. Shena Levenson is also an artist of great caliber who paints different subjects, most often self-portraits and women wrapped in accessories and clothes painted with such precision that they look real.

Helpful was for them the meeting at the Portrait Society of America six years ago after which they got married in November last year after several years of engagement. Lost in love and full of joy for life, they represented the portrait of their son.

While David Kassan focused on an oil painting, Shana Levenson opted for a charcoal drawing.

As for all the other couples of the various demos scheduled during these four days of convention, they agree that everyone has their own personal style and technique, which is not a matter of right or wrong but rather a matter of different approach and taste in using one material or one brand rather than another. Fundamental for them too is the refinement of drawing and the artistic knowledge of anatomy. Between one chat and another not only in the technical-artistic field, the couple also dwelt on some important issues including the changes that the epidemic has brought about and the need to rely on digital with an eye to social and the use of cameras and video cameras that help the artist in advertising their work or in the realization of a workshop.

Finally, for the “triptych of delights” of the last day of the convention, the Portrait Society of America has planned; A meeting introduced by the talented sculptor Mardie Rees and the talented artists Tina Garrett and Anne Rose Bain who have addressed a very dear theme of these times: the promotion of their work through social networks that in addition to being an important means of communication can also become a source of income.

Scott Burdick and his wife Susan Lyon, on the other hand, highlighted the things “to do” and “not to do” in the execution of an artistic composition through the analysis of some works sent for the purpose by the users: the number of works available for analysis by the artists was limited but the listening audience could take note of all the information and suggestions given, which in the end, about everyone.

Last but not least, the Portrait Society of America had a long “retrospective conversation” with Daniel Sprick: “A Look Through My Process and My Paintings”.  Two years ago PBS dedicated a documentary entitled “Daniel Sprick: Pursuit of Truth and Beauty” to the Denver-based artist.

Daniel Sprick, studied with Ramon Mitchell Froman, pupil of Johan Singer Sargent and is an artist like few others, you only need to see the delicacy and precision of his works to understand him; one of those introverted people who behind his silences hides the great ability to capture the subtleties of life in its infinite nuances, and it is here that you discover the sensitivity of the artist that emerges clearly in the artistic path of his works. The conversation takes its cue, or vice versa, from the highlighting of some of Sprick’s works and his refined way of seeing the evolution of events, succeeding in capturing their collateral beauty as can be seen in the representation of his father in his illness.

Whether it is oil, charcoal or watercolor works Daniel Spring stages the tensions between interior and exterior that take shape in his imaginative mind and see him participating in places made almost dreamlike by light and in which in many cases the image of death appears, camouflaged in a tree, materializing behind a woman’s back or taking shape from nothing. And in addition to the vegetable garden, he is the artist who indulges in the fantasies of being Saint Daniel while the bare branches are a corollary in a landscape of an urban scene in which in another painting two homeless people appear, either in landscapes or in scraps of corners of the house in which his figure seems to dismember, losing corporeity in favor of the evanescence that sees him as an imaginary visitor in the flow of this slow and lazy life in which fantasies crowd the mind to end up on the canvas.

In his slow and introverted pace he tells the audience, through his works, his life, his thought and why not, his mysticism that classify him absolutely among the greatest talents of his generation.

The 22nd Portrait Society of America Convention closes here but the 23rd edition is already scheduled to take place in Washington, D.C. from May 6 to 9, 2021: don’t miss it!


The third day of Realism Live: from the academic r