Last day of Pastel Live among enthusiasm and news concerning the world of Pastel and not only. 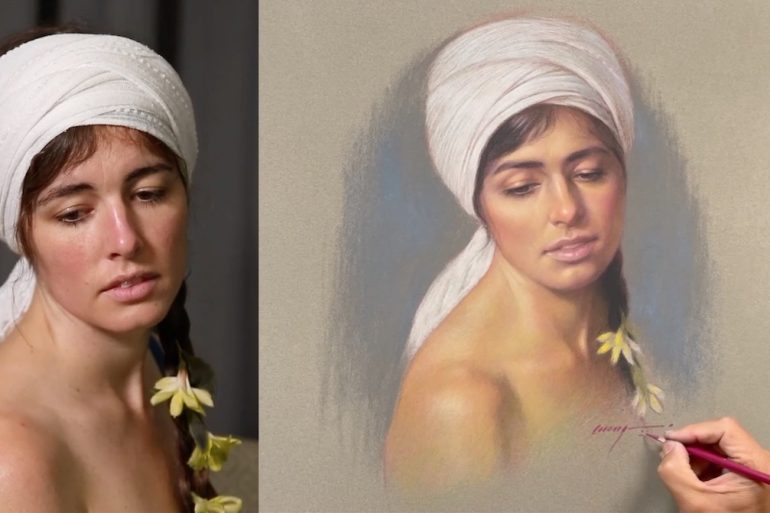 Third and final day of Pastel Live, the three-day, one-of-a-kind event put on by Eric Rhoads and Kelly Kane with the help of the amazing Streamline crew.

The first artist of the day is Marla Baggetta. Marla began painting landscapes -a middle ground between realism and abstraction- after she moved to Oregon. Today her work and workshops are increasingly sought after. Fundamental ingredients in Baggetta’s demo are the right dosage of hue, value and saturation that make the painting perfect. The artist starts from drawing and blocking with dark tones on which she spreads layers of pastel with a pop effect because of the exaggerated colors of which the artist says: “I like to stain in the brights. I think it’s easier to neutralize them rather than get them back later”. Her approach to making work is a continuous back and for between positive and negative forms. For those who ask her the secret to her success, the artist replies: ”It just takes a lot of mileage and trust to listen to the pastel fairies when they show up. You have to be ready for them!”

Sangita Phadke is a self-taught artist talented enough to earn the designation of Master Pastelist by the Pastel Society of America and the International Association of Pastel Societies. Phadke pays special attention to the organization of the crayons that must be visible to her eyes. In addition to referring to photography in the making of the demo she also proceeds to use objects from life, in this case two colored peppers Before starting the demo, make a color scheme with the colors she needs. It is also very organized in the use of the fingers: she use a different finger for each type of color to be applied. Only the little finger is used for multiple purposes. She taps the pigment with her fingers, making the translucent layers thinner. Phadke possesses a very important prerogative for an artist: imagining the final result of the work even before she leaves.

William A. Schneider is another standout from the first edition of Pastel Live. Among the various awards bestowed upon him are Master Circle and Eminent Pastelist from the International Association of Pastel Societies of America. The hat with which he presents himself and paints – he wants to clarify – is not an aesthetic fact but expressly technical and serves to keep the focus on the composition. Schneider, like Mario Robinson but in a different way, also proceeds to make the portrait from the inside out of the face. The artist recommends spending time in making a good basic drawing made of segments and not circular lines, after which he sets the darkest and the lightest point of the composition that serve as a reference in the construction of the palette. In choosing his palette, Schneider follows Munsell’s color wheel, according to which there are five primary colors: red, blue and yellow are joined by green and violet. After applying a thin layer of skin color work on the background with complementary colors. “When depicting a face, it’s crucial to pay attention to the eyes and mouth to avoid the terrible zombie effect,” says Schneider, who uses his palm a lot when mixing crayon, as he learned to do in his school days.

To those who ask him what is the success for the realization of a good portrait, Schneider mentions the quote of another great artist and friend: Scott Burdick, student of Bill Park: “The secret to painting a great portrait? Do 1000 bad ones first!”

Deborah Steward is an artist who has a habit of never erasing anything in the preparatory process. She proved this again today in the creation of an abstract demo in which she depicted her favorite subjects, flowers. But she didn’t do it in a traditional way. Her modus operandi is very particular and intuitive and this is very useful in the realization of mass production because being in fact based on a kind of intuitive painting offer many alternatives of realization. First she makes several preparatory drawings from which she then draws to create the desired composition. Using a large brush soaked in water and liquid acrylics, Steward proceeds to apply a layer of watercolor paint with which she creates a very expressive underpainting. Above she recreates, in charcoal, the flowers of the sketches. After having spread a layer of clear gesso with which he dilutes the charcoal leaving a very interesting trace in the composition. She then proceeds first with hard pastels, with a bold, direct pressure and stroke, and finally with extra soft pastels about which the artist says: “It’s like putting frosting on a cake”.

Aaron Schuerr has already made an appearance at Pastel Live in the session dedicated to LPAPA – Laguna Plein Air Painters Association, a worthy California art association – of which he is a member. Though he decided to represent an excerpt of his home state of Montana, Scherr defines himself: ”An artistic wanderer constantly looking for new places to explore and paint.” In the pastel layering of the upper layers he moves along natural lines, of water rather than plants, and it’s interesting to see the way he inserts shapes and fixes dark masses into the composition. Not a bad move for working in pastel in plein air. But the question Schuerr asks himself every time he steps away from the easel to take a critical look at the progress of the work and the harmony of the composition is: “Do I still have my original idea?” The question seems trivial but for an artist who works in plein air is fundamental because nature is changing and there are many elements that jump to the eye or that in the process you decide to highlight.

In the afternoon session, the roundtable discussion moderated by Kelly Kane featured Janis Allison, Kathy Hildebrandt and Tatijana Jacenkiw, presidents of the Pastel Society of Chicago, Canada and Oregon, respectively. Among the topics addressed that have laid the groundwork for a reevaluation of the medium are: the stigma of pastel as a delicate medium, an opinion countered by art history and discoveries over time that have revealed it to be much more durable than other mediums; the need to educate the public, not only enthusiasts, but also gallery owners and museums about the importance of pastel; to modernize the concept that sees the pastel as a medium dedicated exclusively to people of a certain age. In this regard, it might help if the various dedicated associations promoted this versatile medium through targeted forms of education, magazines, meetings, courses on zoom and conventions (like this one after all). A simple solution would be to join area entities that are dedicated to pastel and share opinions and goals with participants.

Formally closing the first edition of Pastel Live was the extraordinary demonstration by Cuong Nguyen, a talented artist of Chinese origin who grew up in poverty after the fall of Saigon. Nguyen began painting on the streets to help his family and now he is an American citizen, artistic member of numerous institutions whose works are displayed in museums and galleries. Eric Rhoads lo ha introdotto dicendo: “He is gonna blow you away” and he wasn’t wrong. Nguyen works almost exclusively with pencil pastels and cross-hatching. His work is divided into four phases: the drawing with which he defines the values, the verdaccio technique -used during the Renaissance- with which he completely covers the human figure in green; glazing with the layering of color layers and finally finishing the detail. The key to success is controlling the pressure applied to the crayon. An extremely precise, long and laborious job, but one that leaves participants stunned. “Cuong you are bringing me to tears with your beautiful technique and sensitivity”, said one participant . “A great technique,” we add.

Eric Rhoads is always one step ahead and always manages to amaze his audience, no doubt about it.