Immersive and conceptual art between the use of non-conveying natural materials and no-see-ums: The Pérez Art Museum in Miami celebrates a mid-career retrospective of artist Teresita Fernández, on show from October 17th to February 9th, 2020. 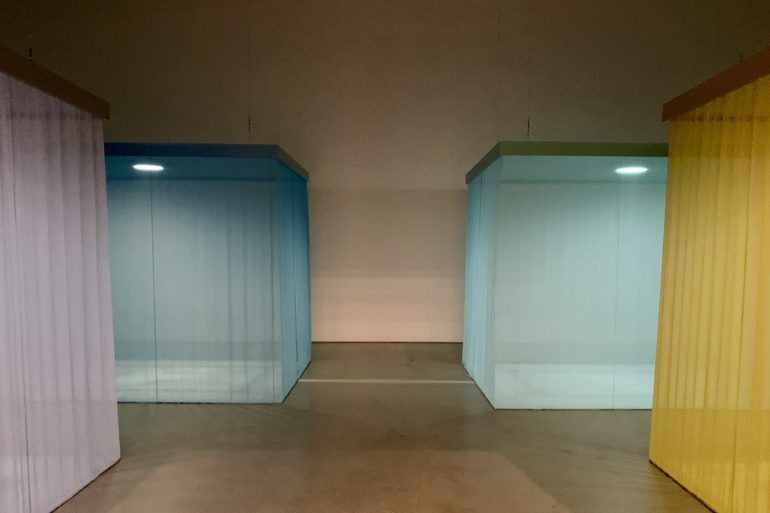 A demanding question to which Teresita Fernández has clearly responded with her concept of art, succeeding in becoming the first Latin American figure to be named a member of the – centenary – US Commission of Fine Arts, a federal panel which advises the President and Congress on national issues regarding design and aesthetics. Since 2016 she has also collaborated with the Ford Foundation with whom she founded the US Latinx Arts Futures Symposium, which brings together artists, museum directors, curators, educators, academics and financiers for a dialogue on how to more widely represent Latin art across the entire spectrum of creative disciplines.

A large-scale artist born and raised in Miami from parents who escaped Fidel Castro’s regime, who could only be celebrated in her homeland with a mid-career retrospective dedicated to her by the Pérez Art Museum in Miami, for the first time in collaboration with the Phoenix Art Museum (Arizona). PAMM, like Teresita Fernández, has always been at the forefront of promoting Latin American arts and artists.

The exhibition includes over fifty of the artist’s best known works, coming from private collections, museums, institutions and from the artist’s personal collection, which highlight over twenty years of career. “Teresita’s work and influence has been vital to the evolution of Miami’s art scene, and has played a significant role in the development of our museum”, says Franklyn Sirmans, Director of the Pérez Art Museum Miami.

After studying at FIU, the artist obtained her Masters in Fine Arts from Virginia Commonwealth University and has lived and worked in New York for many years.

Teresita Fernandez is a conceptual artist known for her immersive sculptures and monumental works, including: Seattle Cloud cover, created for the Seattle Olympics (2006), Stacked Waters for the Blanton Museum of Art in Austin (2009), Hothouse Installation for the Museum of Modern Art in New York (later also commissioned by Louis Vuitton for the Union Square store in San Francisco), Fata Morgana (2015) at Madison Square Park in New York or Autumn ( … Nothing Personal) commissioned by Harvard University (2018).

The last outdoor installation is Solarium (Sanctuary), built in 2019.

The works on display at the PAMM, allow the viewer to have a well-defined overview of the artist, thanks to the distribution of the works divided by elements, natural and symbolic, which proceed by integrating with each other in the large exhibition halls or relegating themselves to smaller spaces.

The artistic research of Teresita Fernández fuses formal and conceptual aspects of her practice through the use of natural materials such as graphite, gold, charcoal and onyx (which have loaded stories often linked to the territory and the power of colonialism) with which, through a deep sense of historical and emotional research, she reinterprets the relationships between nature, history and identity. Fernández, in addition to having explored the problems of contemporary art linked to the perception and manufacture of the natural world, also employed glazed ceramic, aluminum wire, acrylic, plastic and glass beads in her works. Materials with which she presents spectacular optical illusions that evokes natural phenomena, terrestrial formations and water in its infinite forms.

In addition to life-size works, intimate preparatory drawings belonging to the artist’s personal collection and rarely exhibited (those for Borrowed Landscape for example) are on display. This allows the visitor to focus, in addition to the size of her works, on the point of view of Teresita Fernández, who succeeds in capturing the essence of formless elements such as fire, water and air, using materially physical sources. It is an example of all the iconic work Fire (2005) depicting an ephemeral ring composed of thousands of dyed silk threads (from the textile collection of Franco Scalamandré) to make the optical effect of an animated and shimmering flame.

The artist transforms materials into forms that suggest natural phenomena by raising social issues of current interest. This is the case of Drawn Waters (Borrowdale) 1, (2009): a large graphite waterfall that refers to Cumbria, England, the place where, in 1500 every artist’s main element was discovered, with the consequent exploitation of the material from the mines. Teresita Fernández’s works focus on social issues that refer to her initial question. Urgent questions that the United States (like Italy, in any case, in a different way) face today, including the contradictions of democracy and the repercussions of social injustice linked to land and place. Both with the most recent Fire series (United States of America, 2017) and with Charred Landscape (America, 2017) the artist reinterprets the earth, presenting a contemporary American landscape marred by colonial stories of violence and climate change that is strongly opposed to the idealized vision of the American dream.

Another important element in the artistic conception of Fernández (and well emphasized in the preparation of the exhibition) is the use of the chiaroscuro, of the see-ums and of the play of shadows that are undoubtedly inspired by the experience of the artist gained in Japan during the years of artistic residence. In relation to Japan, and the way in which its people relate to the world and objects, Fernández has developed a relationship of affinity that for about twenty years now, has led her to return frequently, finding it a strong source of inspiration.

Through the practice of see-ums and chiaroscuro, she explores perception and psychology by manipulating light and space to create engaging, intimate and evocative experiences made even by the wide range of materials used including silk, graphite onyx, mirrors, glass and coal, which allow her minimalist but substantial works to evoke landscapes, elements and natural phenomena. An example are the cloud formations of meteorites and the night sky of Night Writing, (2011), in which the artist was inspired by the idea of ​​how humans have always looked to the night sky for driving information, navigation and time. Curious is to know that there are further notions that are hidden behind the works, such as the title itself that comes from a first form of braille that Fernández used to translate the text that has become a model of constellation of perforated holes supported by mirrors, making the work a dynamic and reflective surface.

Large-scale sculptural works, installations, drawings and works on walls that include the viewer who becomes part of her world. Elemental becomes the means by which to ask existential questions about the perception of place, nature and social order but that at the same time knows how to regenerate the visitor’s soul through the palpable natural beauty.