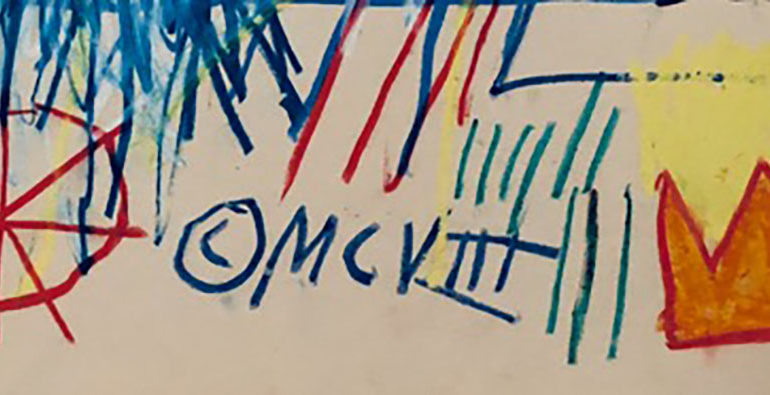 Jean Michel Basquiat “Drawing in painting”, this is the spotlight that the Norton Museum in West Palm Beach dedicates to one of the first, great, African-American artists during the Black History Month, from February 8th to March 18th. Officially recognized by the American government in 1976 with President Ford, Black History Month, celebrates the importance of people and events of the African American people from the African diaspora. The Museum presents some works belonging to private collections rarely shown to the public. 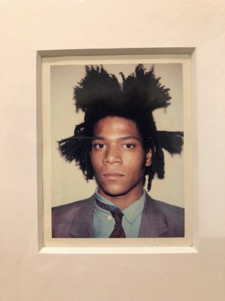 Jean Michel Basquiat “The Radiant Child” as defined by the critic and writer Rene Ricard. Son of the Afro-American bourgeoisie from which he dissociates at the age of 17, preferring to a wealthy school and his family, the streets of the Upper West Side on the walls of which, in the company of his friend Al Diaz, leaves graffiti signed SAMO (from the jargon) school in use “Same Old Shit”) and crowned with the ubiquitous copyright mark in all the works done in the 80s.

His ambition, his energies and his talent will soon be intercepted by an art market in total revolution in search of the perfect sacrificial victim: He and his spleen, his malaise, self-destructive instinct that gives a romantic allure to the damn genes that like him live with unruliness at the limit of the lawful to leave us with an inevitable dramatic ending. 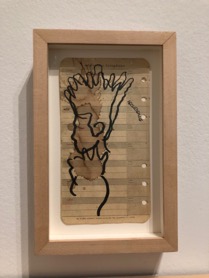 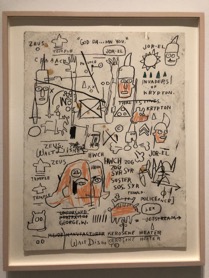 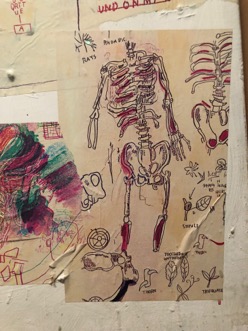 Jean Michel’s artistic training starts from his mother who admires while drawing biblical images on restaurant placemats and who, besides taking him to museums, gives him important books that will mark his hallmark forever: Anatomy by Henry Gray, fundamental in all his works, but also the same Bible that he interprets in his own way, and two of his favorite books: The monkey on the back of Burroughs and I Sotterranei of Keruac. The color, the gesture and the sign give free rein to the apparently infantile images full of meanings that are very cultured and mix with the stimuli that the everyday life of New York is able to offer to a curious and receptive person like the young Jean Michel. 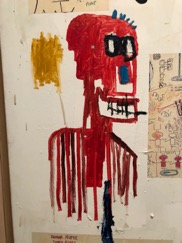 The particular use of the black mark, as well as the teeth, are instead inspired by De Kooning and in some works there is also a clear reference to Picasso. Its graphic signs: the crown, the black skulls, the dogman, the copyright and the writings create an unmistakable vocabulary and iconography. 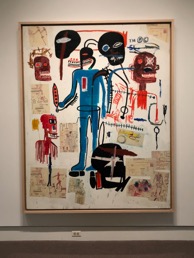 The ’80s are the golden years for Jean Michel, and it is above all the meeting with Annina Nosei, an Italian art dealer who is well-placed in the art market, allowing him to have his own gallery in the basement of his home and to enter part in the world that matters finding itself in white with pockets full of dollars. A story that leads him to produce a work a day but that unlike the beautiful fairy tales has a happy ending and the lieson with Annina ends two years later. 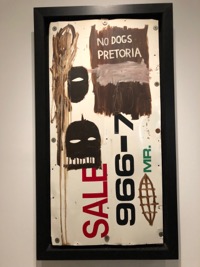 The lack of perspective, the frontal vision of the works but also the lack of sense of finish of the work itself, framed with recycled materials taken in the landfills express the deep sense of anger and restlessness that animate it. 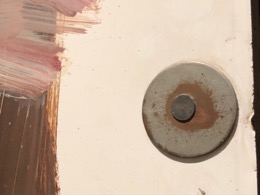 There are two themes that Jean Michel faces in the period between 1982 and 1985: the social injustices, the abuses and the racial disparities that lead him to suffer even when, at the height of his success, he feels refused to stop the taxi because he is a color man , and the music, the only constant that accompanies him in life, first on the streets of NY with his ghetto blaster (the famous radio that goes to rest on the shoulder) then on the same canvas in the form of African American musicians, sax and trumpet players , among his idols, several times represented, Charlie Parker and Louis Armstrong The same Jean Michel is part of a group, the Gray. In 1983 he had his first official exhibition at the Whitney Museum in New York, with Keith Haring and Cindy Sherman. Thus begins its period of splendor that also coincides with its collapse due to excessive consumption of drugs. Afterwards, the almost paternal relationship with the genius of Andy Warhol who apparently seems to alleviate the conflicting feelings that refer to a relationship never healed with his father and the collaboration in a series of six-handed works, the Collaboration, with Basquiat, Warhol and Francesco di Clemente, contrary to expectations, do not receive a favorable opinion from the critics who merely indicate the genius of Basquiat as relegated to graffiti alone.

In 1987, the ghosts of the past, the sense of loneliness due to the death of Andy Warhol and the fear of not being more famous make Basquiat even more fragile and addicted to drugs that will take him away a year later at the age of 27 . Basquiat will be the first African American to gain a reputation and a prestigious role in the art world, hitherto recognized only to whites.


A tour around the unique Expressionistic Modern st

Pit stop in Phoenix trough the lens of graffiti ar

Mist Across the Pond by Thomas W. Schaller . Wate

There were many novelties proposed by Streamline P