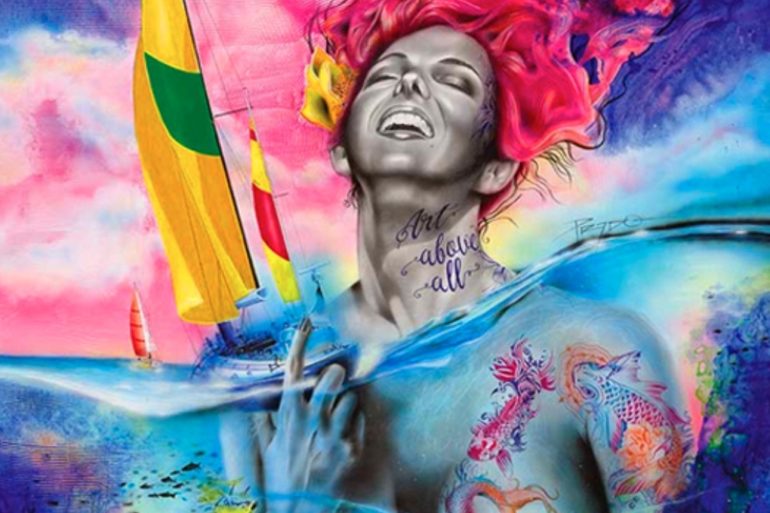 Artist with exuberant colors Hector Prado is an established graphic designer who has realized the dream of becoming a visual artist.  Born and raised in Cali, Colombia, Hector Prado lives and works in Miami where his works are appreciated by collectors around the world.

After studying Graphic Design in Panama, he made his debuted as a digital graphic designer, he was also art director and multimedia creative for multiple national and international advertising agencies, a role that has led him to receive numerous awards for both graphic design and advertising campaigns creating for global brands.  These awards include international festivals, such as: the Cannes Film Festival, the One Show, the London Awards, the Clio Awards, the New York Festivals and the Emmy Awards, as well as the world art poster for Volkswagen (Beetle) and work for the Hillary Clinton advertising campaign.  Among the awards is a special award for the design of the posters for the miniature series The Pacific by Steven Spielberg commissioned by HBO.

But in 2012 the turning point: he gave up advertising to realize his unfulfilled dream as a child, that of becoming an artist (what he calls “ART-vertising”) put aside at that time in order to have a job that would guarantee him and his family economic stability and allow them to live free from the corporate world (Prado is very attached to his family in which other artistic talents are discovered: the oldest daughter is a very talented soprano singer and the youngest as well is singer and plays five-instruments). Prado has therefore decided to enrol and attend MIFA -MIami International Fine Arts- assiduously and tenaciously, learning the solid academic foundations necessary to be defined as a true artist.

A practical demonstration of his skill is represented by the drawings made for the cover of the book “El poder del Enemigo” written by Armando Caicedo, who expressly wanted him for drawing the cover, and not wrongly: the work in graphite is a splendid and complex representation of a war scene (with reference to the Korean War of which the book speaks). Prado’s works belong to what he calls Contemporary Fantastic Realism, inspired by Magic Realism, the Hispano-American literary movement born around 1950 (of which Gabriel García Márquez with “One hundred years of solitude” was a great representative) and characterized by the combination of fantastic elements in the narrative.

Hector Prado in the same way includes in his artworks realistic background fantastic and irrational elements with which he creates contemporary works captivating by the sharp use of vivid and brilliant colors, which draw the viewer’s attention, inviting him to an emotional dialogue. In 2018 he was selected to present the official poster of the 55th Coconut Grove Arts Festival: the largest outdoor art festival in Miami, second one in the world, for which the artist composed the work “Wind of Change”, a work dedicated to the exaltation of women’s tenacity as well as their beauty.

The festival, during the years, was also attended and won by Romero Britto, Guy Harvey, Alejandro Mijares, Jacqueline Roch, Xavier Cortada and Gene Duaiv  In his artistic career he has composed different series: Vice Girl, Blue, Nature and Icons of the world, all of them characterized by the use of acrylic colors and charcoal as an expressive medium, to bring out the dynamic movement of his rich brushstrokes of color and the enthusiasm with which he transmits his emotions that allow him to communicate with the viewer.