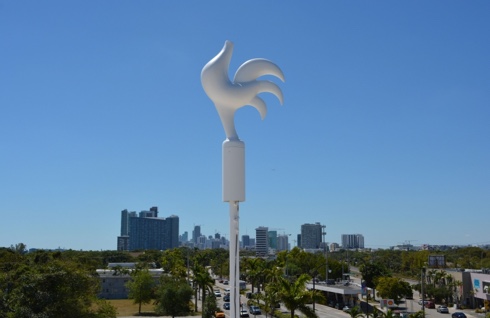 Since April, 3 headless chickens have been placed on 3 building roofs in Miami, precisely in Downtown, on the roof of the building on the corner of All Day at 1035 N of Miami Avenue and the Corner Bar; in the Design District at 3852 N Miami Avenue and MIMO at 5555 Biscayne Boulevard (it can be well seen from the Andiamo pizzeria).

Headless chickens are real 4 feet tall (one and twenty meters) sculptures that are part of a social experiment, Whithervanes, a stress-based alarm system funded by Locus Projects and John S. and James L. Knight Foundation, in which art, media and technology are combined. Choosing the chicken as a representation is based on humor Running like a Headless Chicken. Put in strategic points of the city these sculptures are all connected to a software that through Twitter and Reuters monitor and measure the climate of fear on the internet: their software searches for precise keywords related to fear, for example: natural disaster, economic collapse, war , etc … here in Florida other words have been added such as: sea level rise and climate change, referring to the fact that contemporary political media, politics and structures use fear as a persuasive method. When the level of use of these words increases the sculptures begin to rotate faster, reading the position of a relationship and turning in the opposite direction to those GPS coordinates, as if the news were a gust of wind. They change color according to Homeland Security threat level warnings: green (low risk), blue (precautionary risk), yellow (high risk), orange (high risk) and red (serious risk). Passersby and the public can influence the change in the direction and color of chickens by increasing or reducing fear by tweeting the hashtags “#keepcalm” or #skyfalling, to the account @Whithervanes, or by visiting http: // www.whithervanes. com.

The device was designed and developed by Rootoftwo design studio, founded in 1988 by the Detroit-based artist Cézanne Charles and John Marshall. The Locust Projects, a gallery in the Miami Design District, commissioned the public art project, which previously appeared in France and England, “They are like weather vanes, except they respond to fear rather than the wind because this daily bombardment of bad news has an effect on all of us, increasing our anxiety, “says Lori Mertes, executive director of Locust Project. The aim is to identify the factors through which we perceive ourselves and the factors inculcated by the media both in today’s society and in the future.

The trial period will last until July so if you go from those parts carefully observed the rooftop indicated and you will see the famous 3 chickens headless!