Great enthusiasm and participation for the first day of Realism Live. 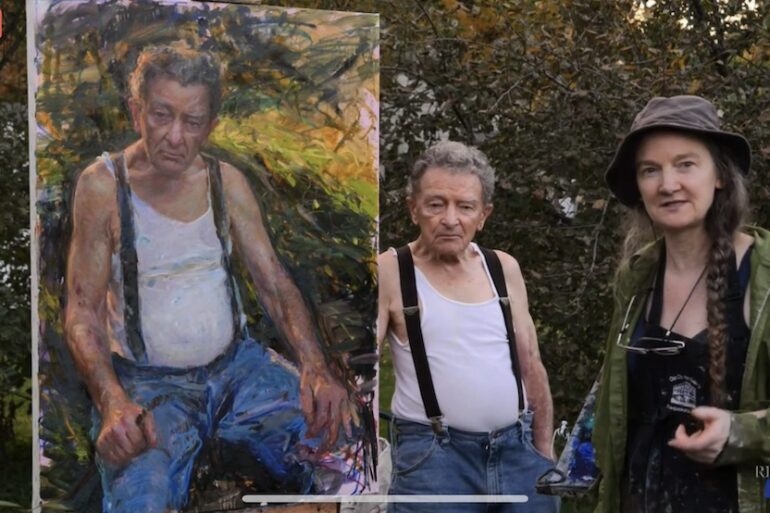 The loquacity of Peter Trippi’s expressions equals the energy of Eric Rhoads in inaugurating the first official day of Realism Live: the convention that brings together artists, enthusiasts and collectors of realistic works related to figurative art, landscape, still life and floral art. The day obviously started with the presentation of Eric Rhoads and Peter Trippi, respectively publisher and chair-man and editor in chief of Fine Art Connoisseur Magazine, FACE and Realism Live, who presented the long-awaited virtual event that this year took the place of FACE-Fine Arts Convention and Expo, due to the epidemic.

He opened the dances, the real ones, those of the artistic lessons, Joshua LaRock with his demo painted, what he called: “the most important part in a portrait”: the eye. He has not painted any one but that of his wife Laura. The mastery, both in painting and in narrating the physical and artistic characteristics of the eye – in this case – in different expressions and perspectives, in relation to the source of light, have earned him the “ARC Living Master” award from the ARC -Art Renewal Center- prestigious organization that deals with the protection of American realist art.

Dean Mitchell, second guest of the day was entertained by Peter Trippi: the conversation was meant to be a reflection on the implications of the epidemic: perplexities and priorities it brought to the world. Mitchell, in addition to being a technically deserving artist, proves to be a person with a certain sensitivity of mind, not granted to everyone and that is also reflected in his style and in his artistic choices that do not compromise in order to please the market. These are the reasons that have led him to be extremely appreciated by both collectors and museums. In a rather heartfelt way, recalling the state of poverty from which he comes, he said that: “with the epidemic we have realized how much we need each other, because alone we are nothing”. Interrupted by the “breakout room”, a space of time during which participants are divided into groups of 6/10 people interacting with each other, the Portuguese artist Marc Dalessio gave a demonstration of landscape art: his “painting into the effect” technique has brought to light in an extraordinary way an excerpt from the cliff overlooking the Dordogne River in Occitania, France.

Questions teasing and chaffing those of the moderator Peter Trippi in the round table in which participated Jennifer Balkan, Patricia Watwood and Alia El-Bermani, the latter among the founders of “Women Painting Women”: female group composed of women who share the same artistic point of view. Trippi focused attention on the importance that women receive in the artistic environment: their presence and “value” in universities, museums and galleries. If the weight of the story reveals psycho-social implications that a participant in the course chatted as “Imposters Syndrome” namely the pathology of when a person doubts their abilities, talent or achievements and has a persistent internalized fear of being perceived as “fraud,” Graydon Parrish heartened participants by stating that: “half of the time when I expose I feel terrified”, showing how the problem is no longer a question of female or male gender but depends on the desire to do regardless of entrenched stereotypes or the search for absolute perfection.

Before the breakout room Todd P. M. Casey, author of the precious volume “The Art of Still Life: A Contemporary Guide to Classical Techniques, Composition, and Painting in Oil” a must have for those who approach this artistic genre, has shown how masterfully he manages to master the technique of still life.

Last but not least, the grandiose Rose Fratzen who celebrated her father in a very raw portrait of him, made so also by the use of oil pastels in sticks: “back and forth like a dance, between warm and cold tones”, declares the artist about her process in which she claims to be in a constant state of learning and not of demonstration. An exciting day with artists of absolute note that ends with a cocktail and the chance to paint live -of course, a virtual “live”- and that promises as many emotions for the days to come.

The Andy Warhol Museum in Pittsburgh, PA, in celeb