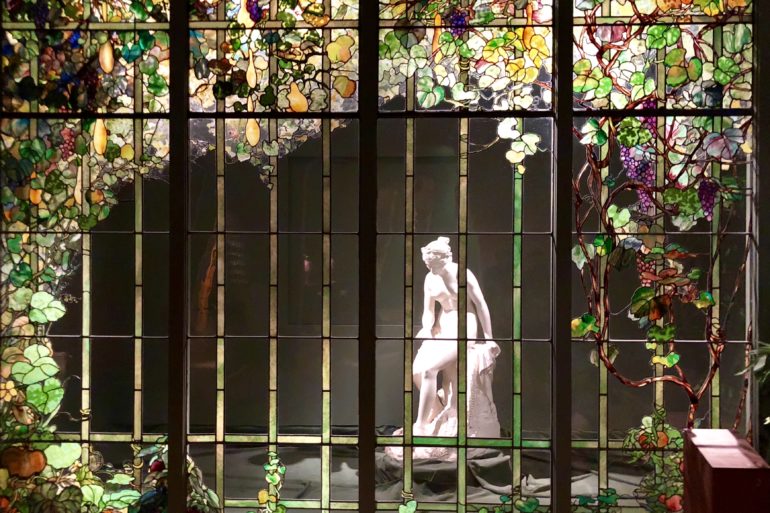 Just steps away from the chaotic parks of Orlando, in Winter Park, there’s the Charles Hosmer House, better known as Morse Museum of American Art, the greatest collection of objects, works and paintings by Louis Comfort Tiffany.

Son of Charles Louis Tiffany, famous founder of the homonymous jewelry on 5th Avenue, New York today known as Tiffany & Co., Louis Comfort Tiffany was the first creative director of the maison. Nevertheless he chose another path, the artistic way, following his ideal of pursue of beauty and becoming thanks to it one of the most well-known artists and designers of the XIX century. Among the people he worked for are names such as the famous writer Mark Twain, the industrial pharm Candace Wheeler and for the XXI President of the United States, Chester Arthur, for whom he painted the Blue Room, the East Room, the hallway, and the State Dining Room at the White House. 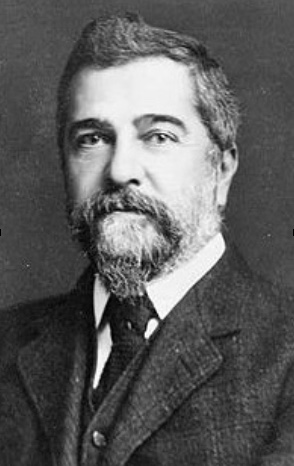 As artist he became member of the Design Academy at the age of 23, but at 24 he decided to set art aside t dedicate himself to chemistry, more specifically to the techniques of workmanship of glass and patenting a new treatment for opalescent glass: a revolution in the technique in which new colors were combined and molded in order to create a new range of tones and three-dimensional effects as accurate-looking as they could be to a 3D representation of nature: his main form of inspiration, allowing the shape to be dictated by the glass itself rather than to be painted on top of it.

The charm of nature and the refining of the techniques allowed him to create the Fevrile: handmade vases, which in a short time became famous because of their bright tones and their iridescent surface. 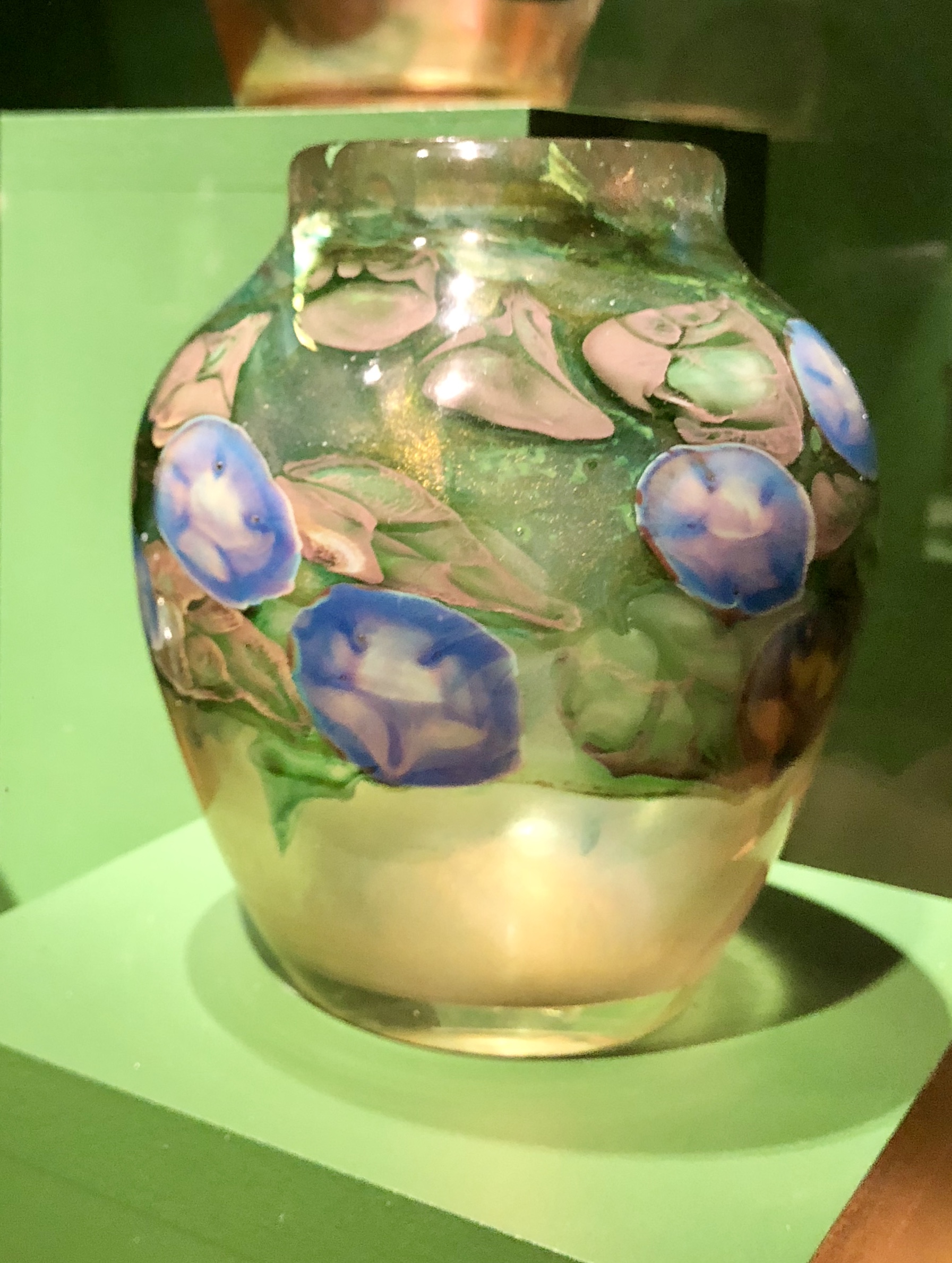 His modern technique, which could be defined à-l’avant-garde, was presented in Paris at the Siegfried Bing Gallery, it was exhibited at the Paris Expo in 1900 with Four Season, with which he won the Applied Arts Award and got the title of Knight of the Order of the Legion of Honour. With the Paris exposition he introduced the world to what it’s today known as Art Nouveau. 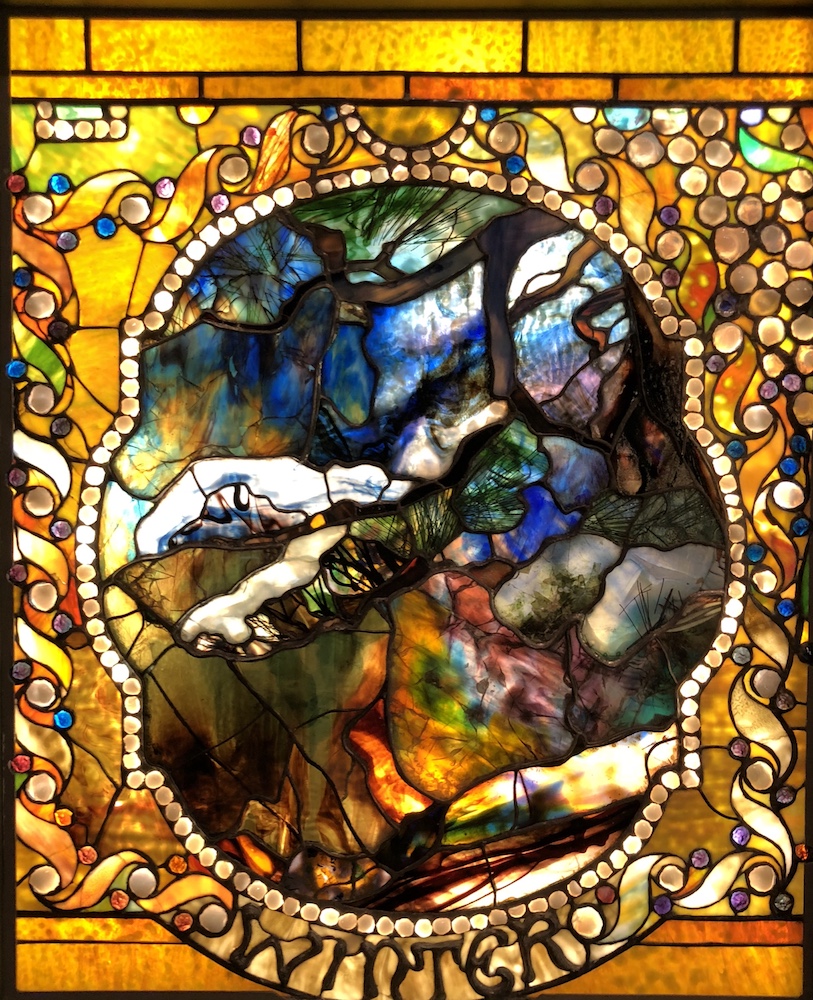 However his technique was strongly criticized by the school of glass with the most ancient gothic tradition that rejected opalescent in favor of a monochromatic transparent glass. 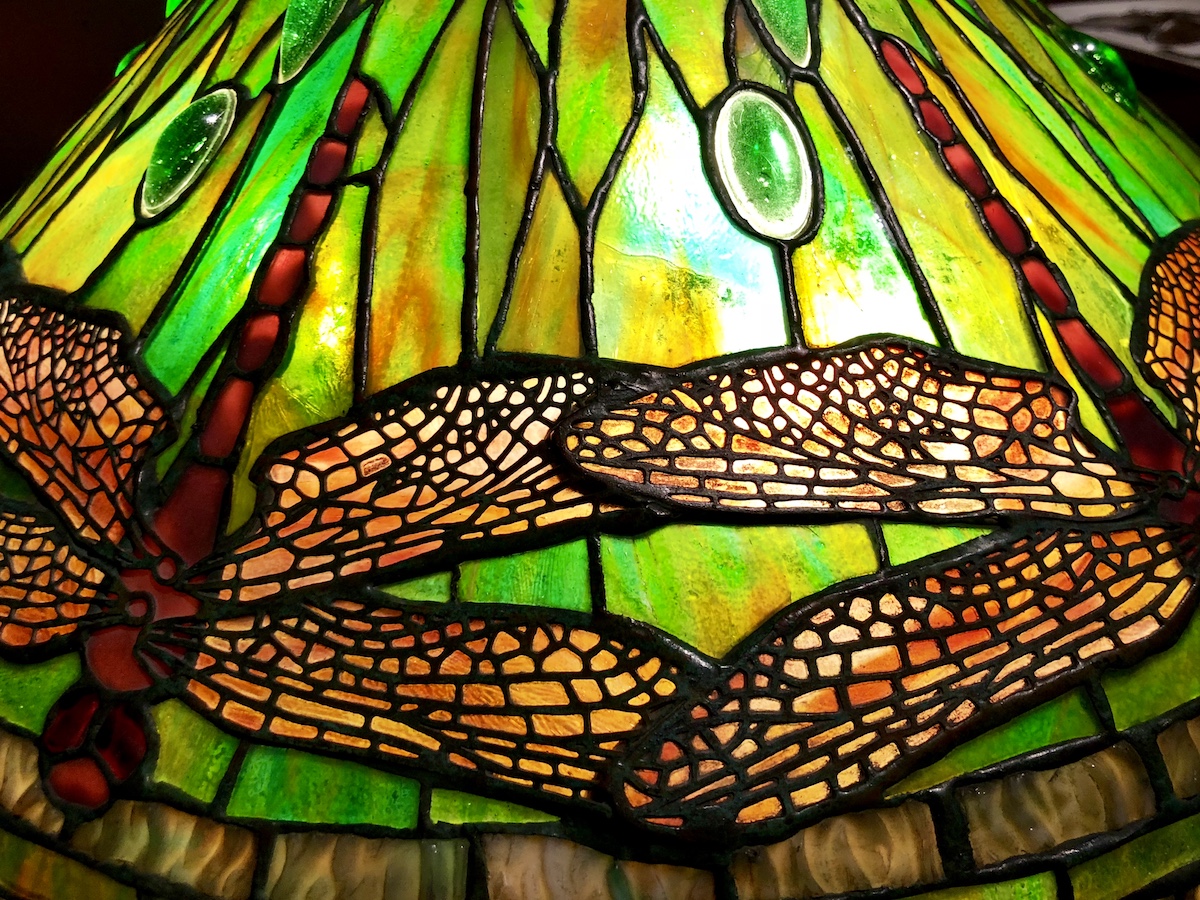 His artistic and manual abilities comparable to genius minds, made of this character a well-known name which is immediately linked to Tiffany Lamps, which nowadays strongly differ from his first works signed with Tiffany Studios New York.  The Tiffany style lamps are made by expert hands and recall by type the technique used in tin forging and very colorful opalescent glass but are not attributable to Louis Confort and his company.

More or less reliable historical sources reveal that Louis Comfort Tiffany was actually joined by Clara Driscoll, his supervisor and referent of a team of artisans. A categorically talented woman, the “Tiffani’s Girl” seems to have been the true creative force hidden behind a legendary object in the history of American decorative arts: the Tiffany’s lamp. 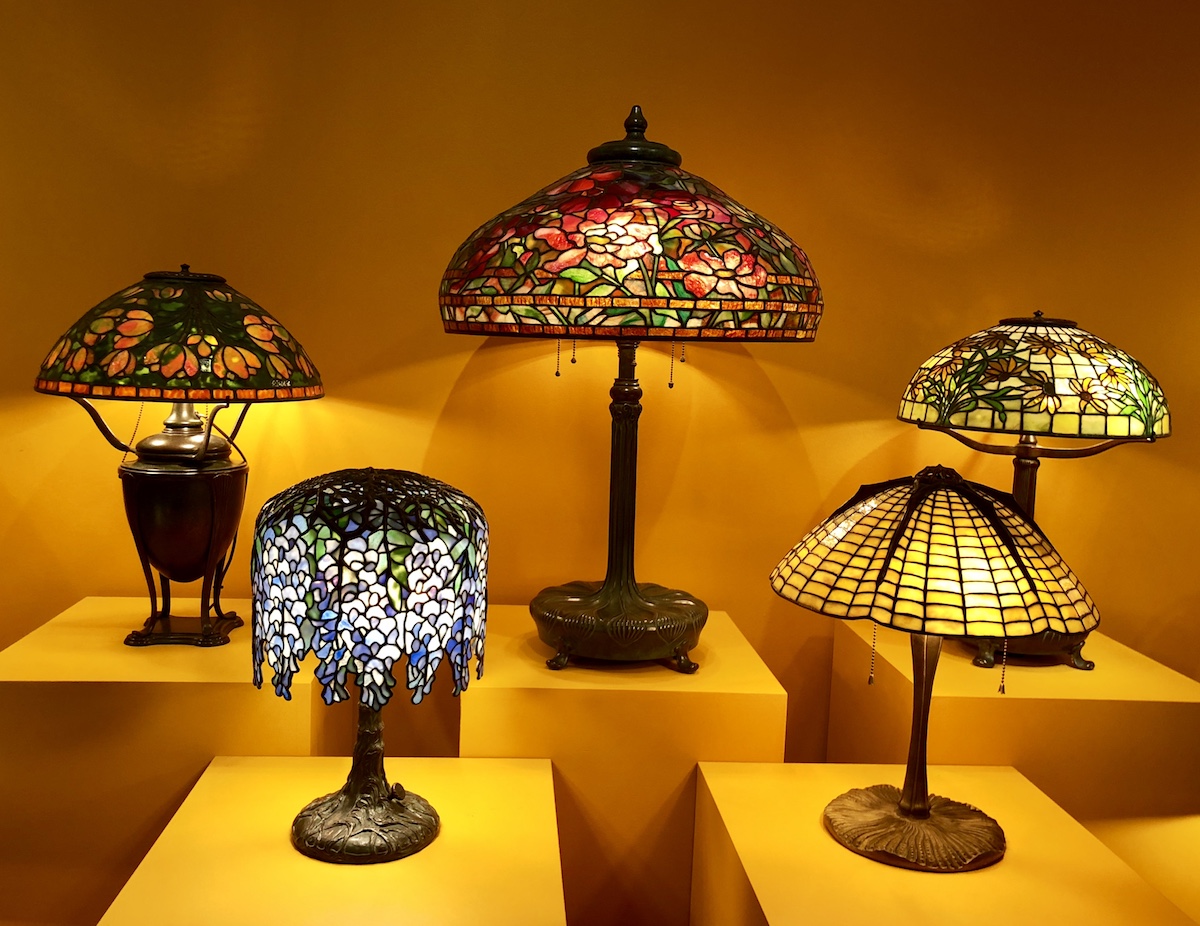 Entering the Morse Museum is a real discovery because it turns out that Louis Comfort Tiffany was also a painter, decorator, architect, photographer, designer of ceramics and furniture, jewelry and enamels. 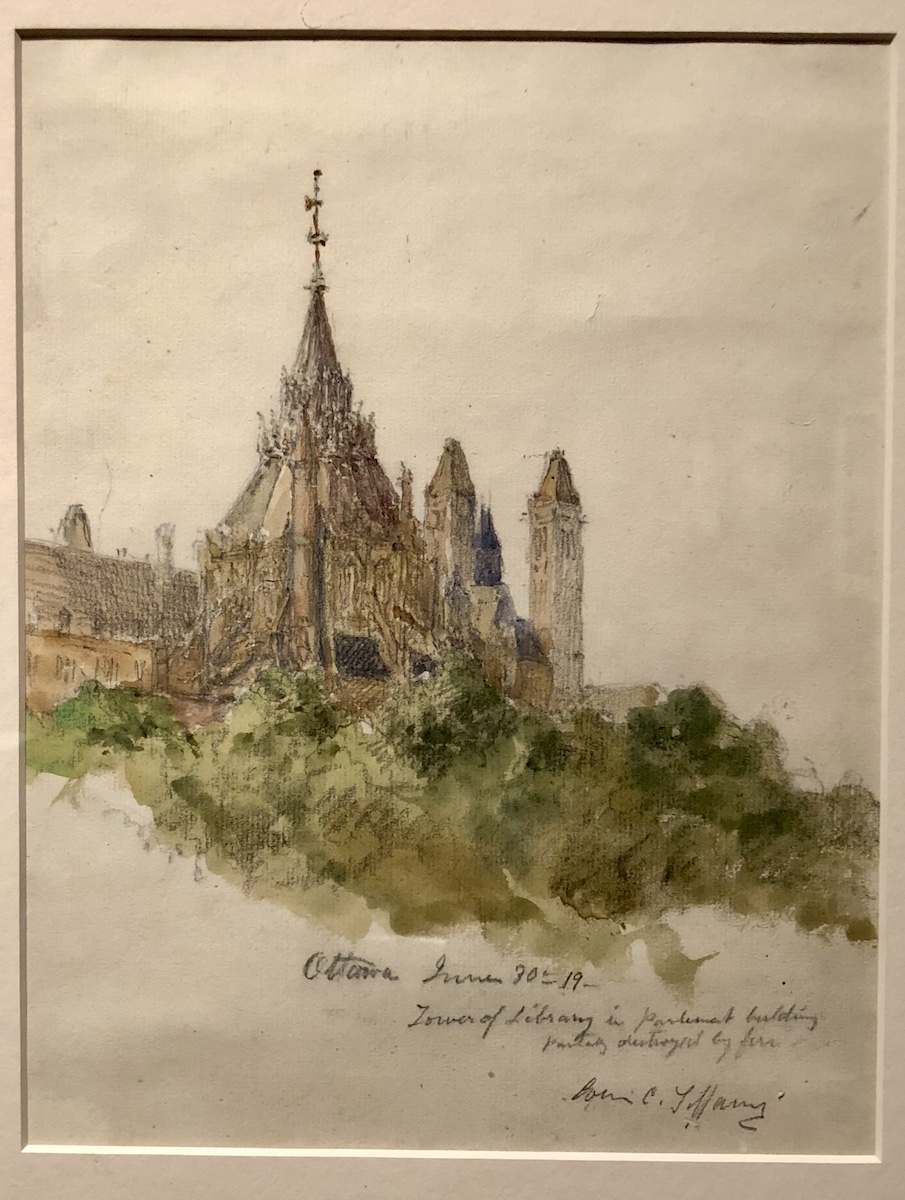 His are the enchanting windows and the rosettes representing sacred figures. 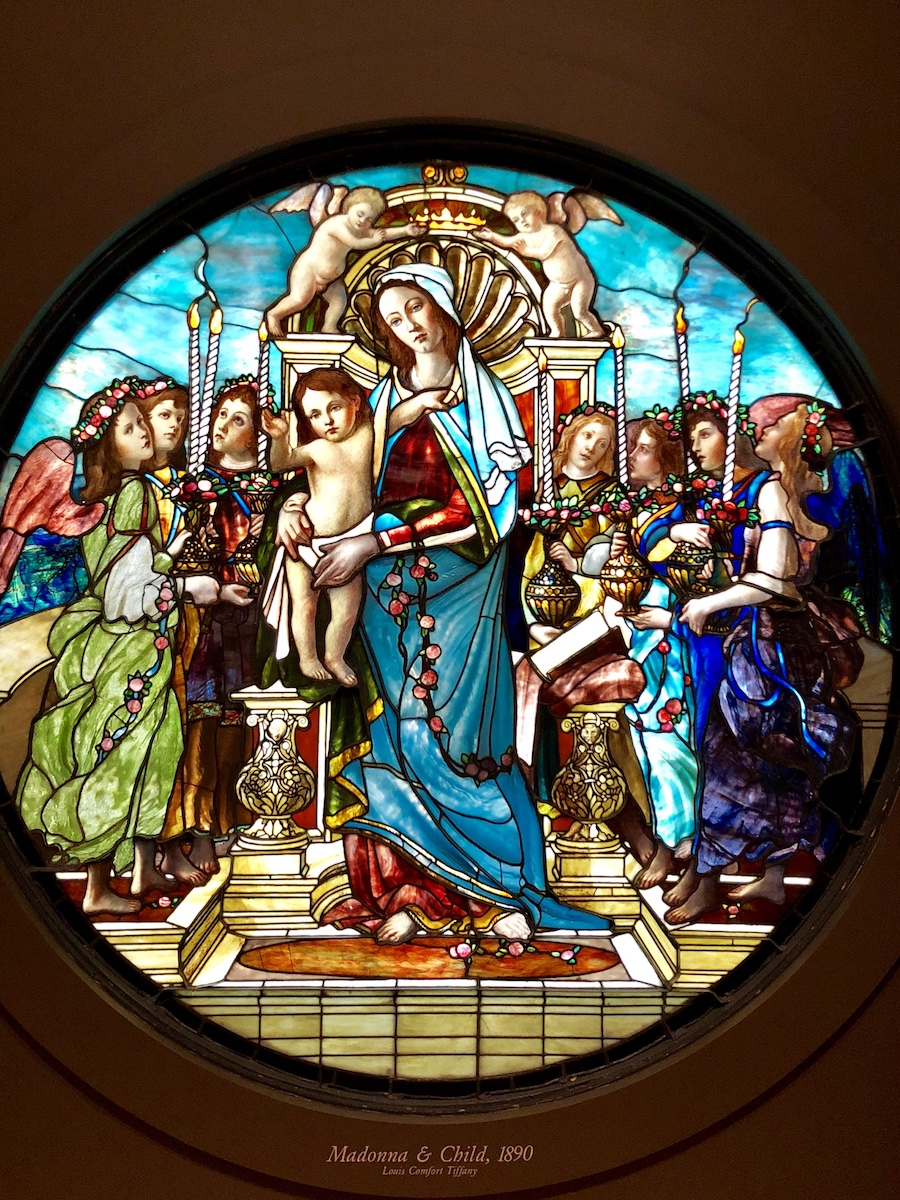 His Chapel, the interior chapel created for the 1893 Columbian exhibition in Chicago. It has a Romanesque-Byzantine style, with arches and columns covered in mosaic that highlight the artistic and craftsmanship in the production of ecclesiastical goods, ranging from vestments and furnishings, mosaics and leaded glass. 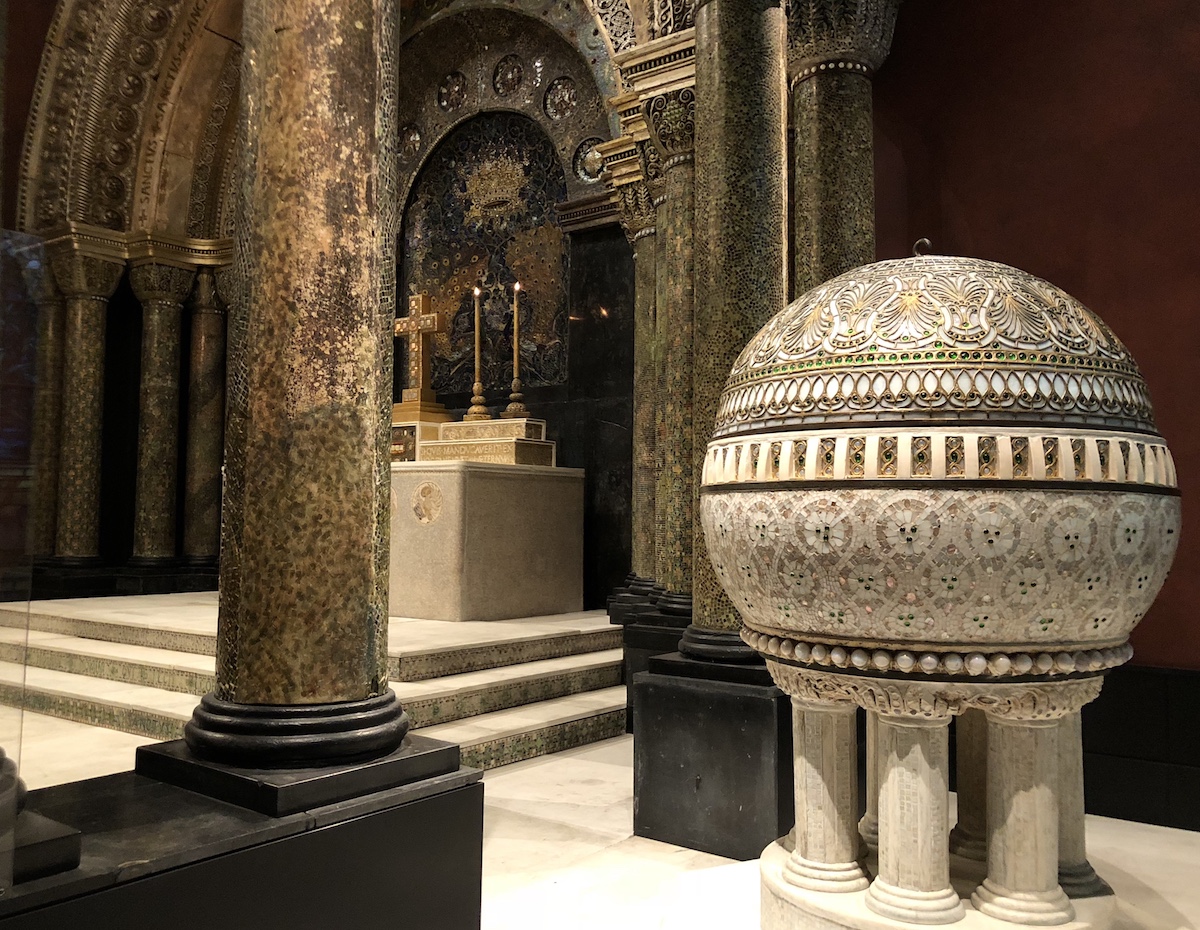 The chapel, dismantled after the exhibition, was initially recomposed. After several vicissitudes first to Laurelton Hall, the Tiffany country estate on Long Island, and sixteen years after the death of Louis Comfort, following a fire, it was definitively purchased , with other jewels by Hugh and Jeannette McKean of Winter Park. 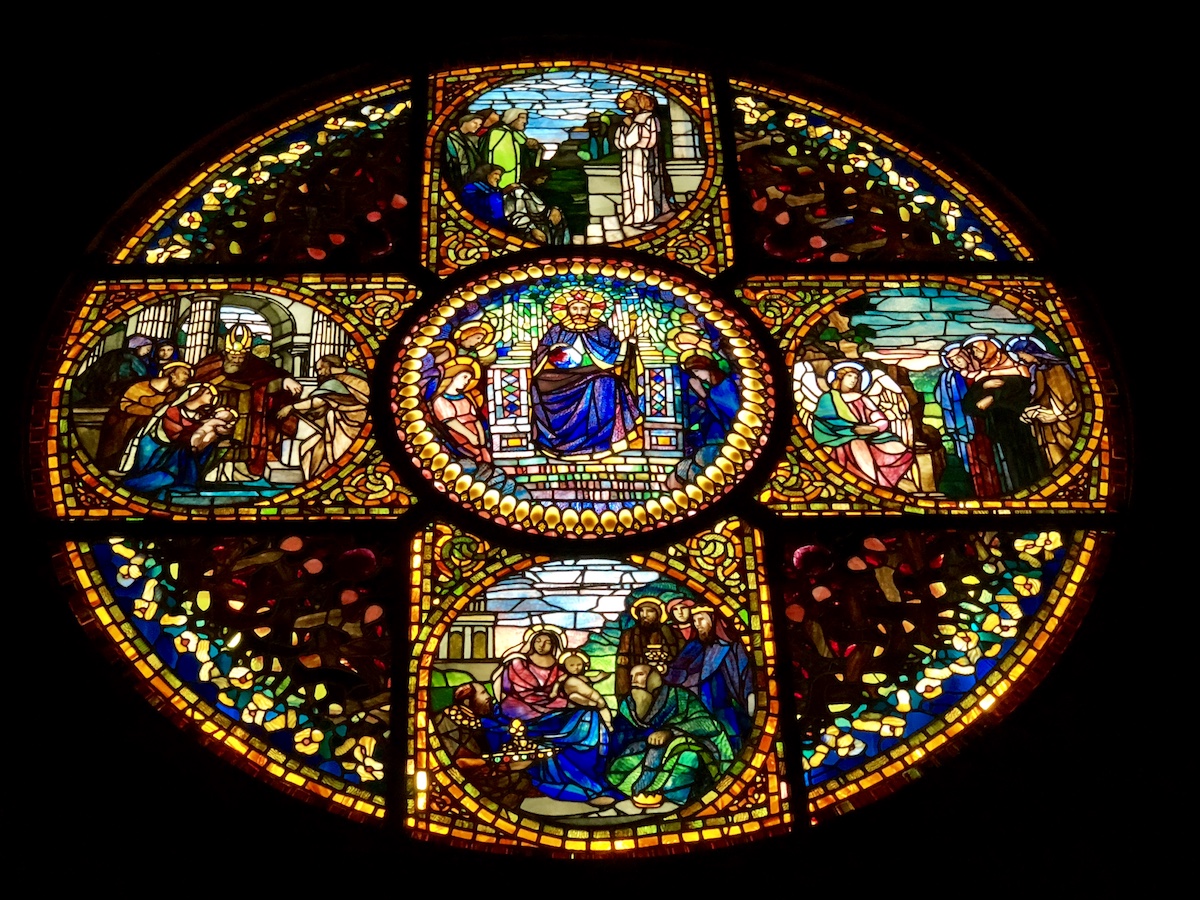 Jeanette McKean was the founder of the Morse Museum, named in honor of her grandfather Charles Hosmer Morse, a Chicago industrialist, philanthropist and benefactor of Winter Park. Her husband Hugh was director of the museum for fifty-three years as well as one of the greatest connoisseurs of Louis Comfort Tiffany. After two years of intense work and research of the various pieces that were dispersed in the fire, the Morse Foundation managed to faithfully reproduce the Chapel bringing it back to its former glory. 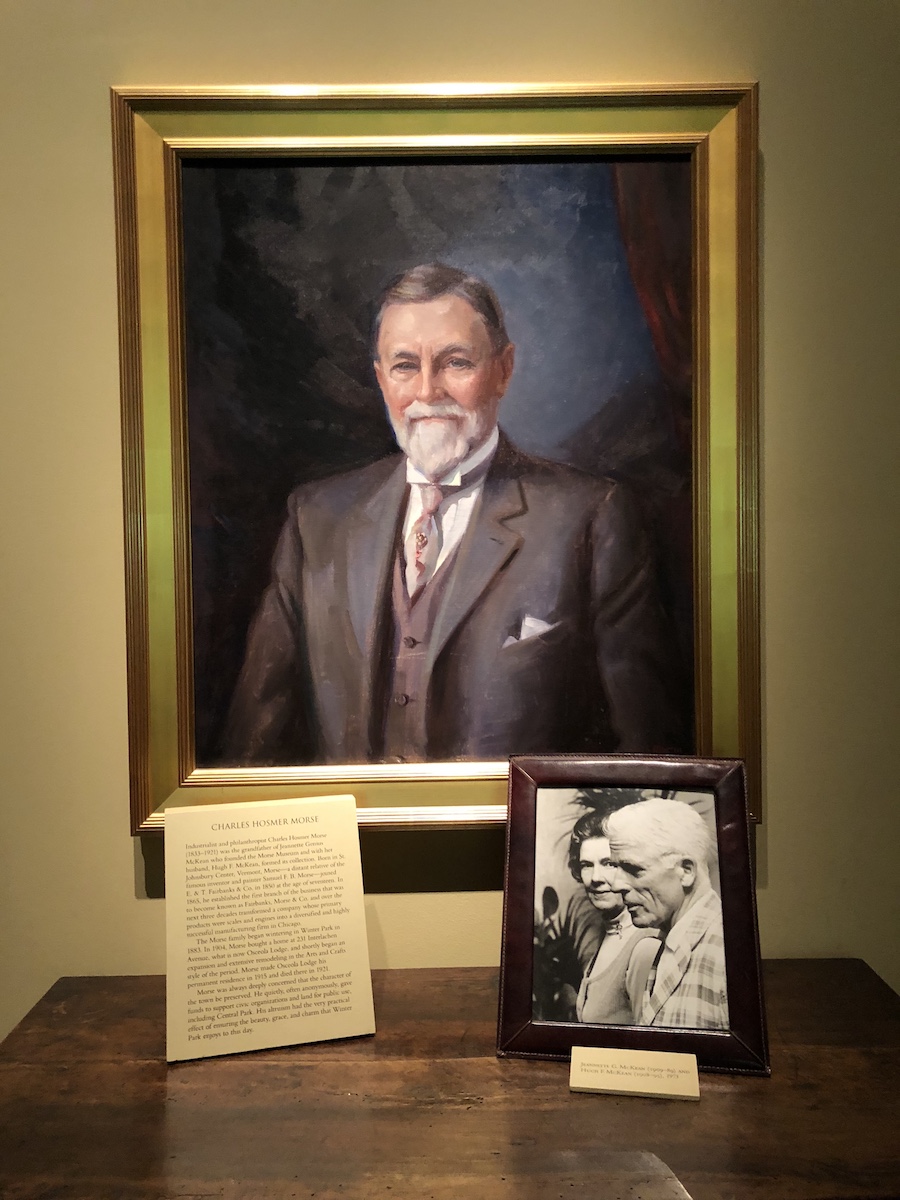 The idea of ​​feeling physically inside a work of art, surrounded by rosettes representing sacred images adorning the altar and the baptismal font, finely covered with mosaics, and surmounted by a splendid emerald-colored chandelier masterfully shaped of the cross. 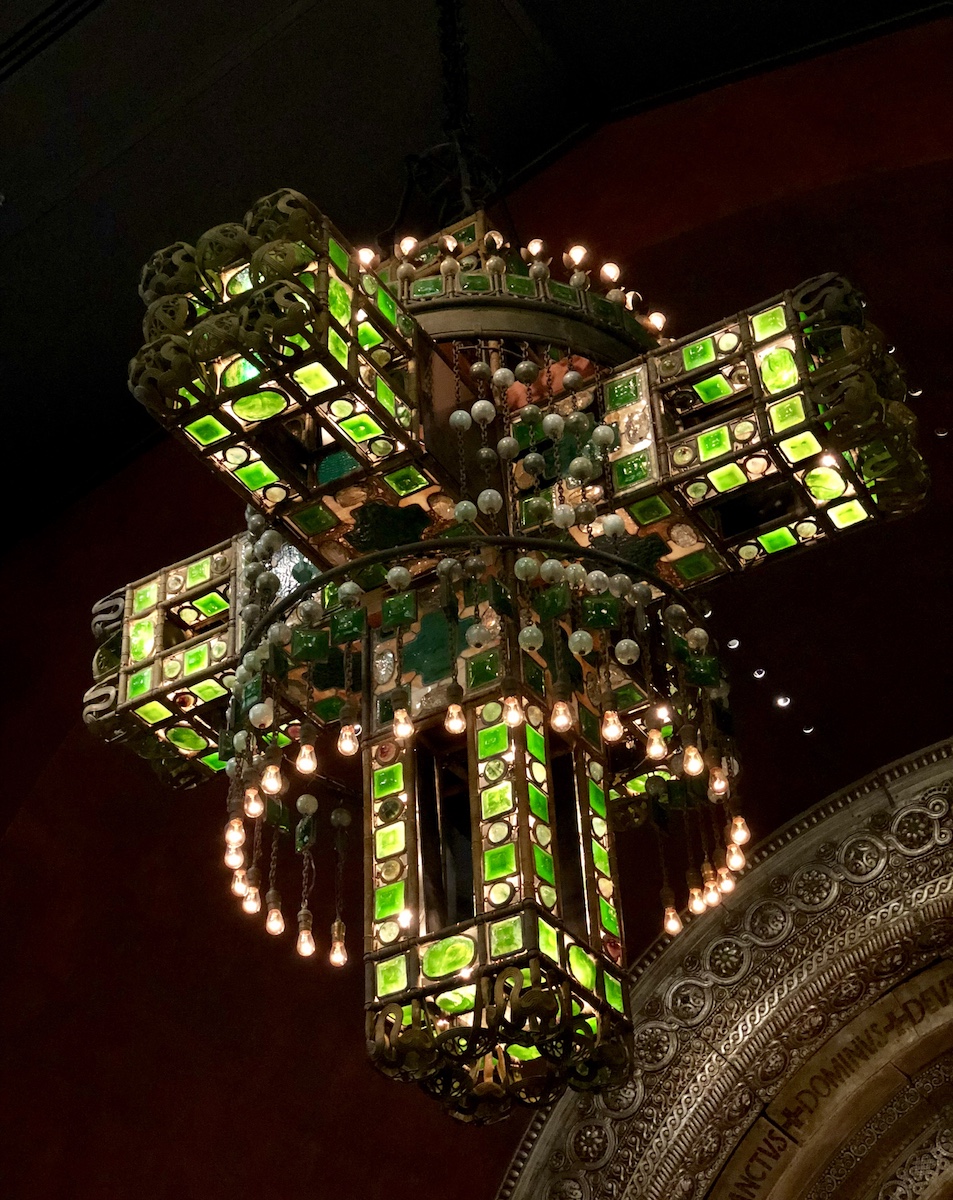 On the back of a column of the chapel we can see almost a little picture, a watercolor drawing dated 1894, perfectly preserved and representing the image of the chapel. 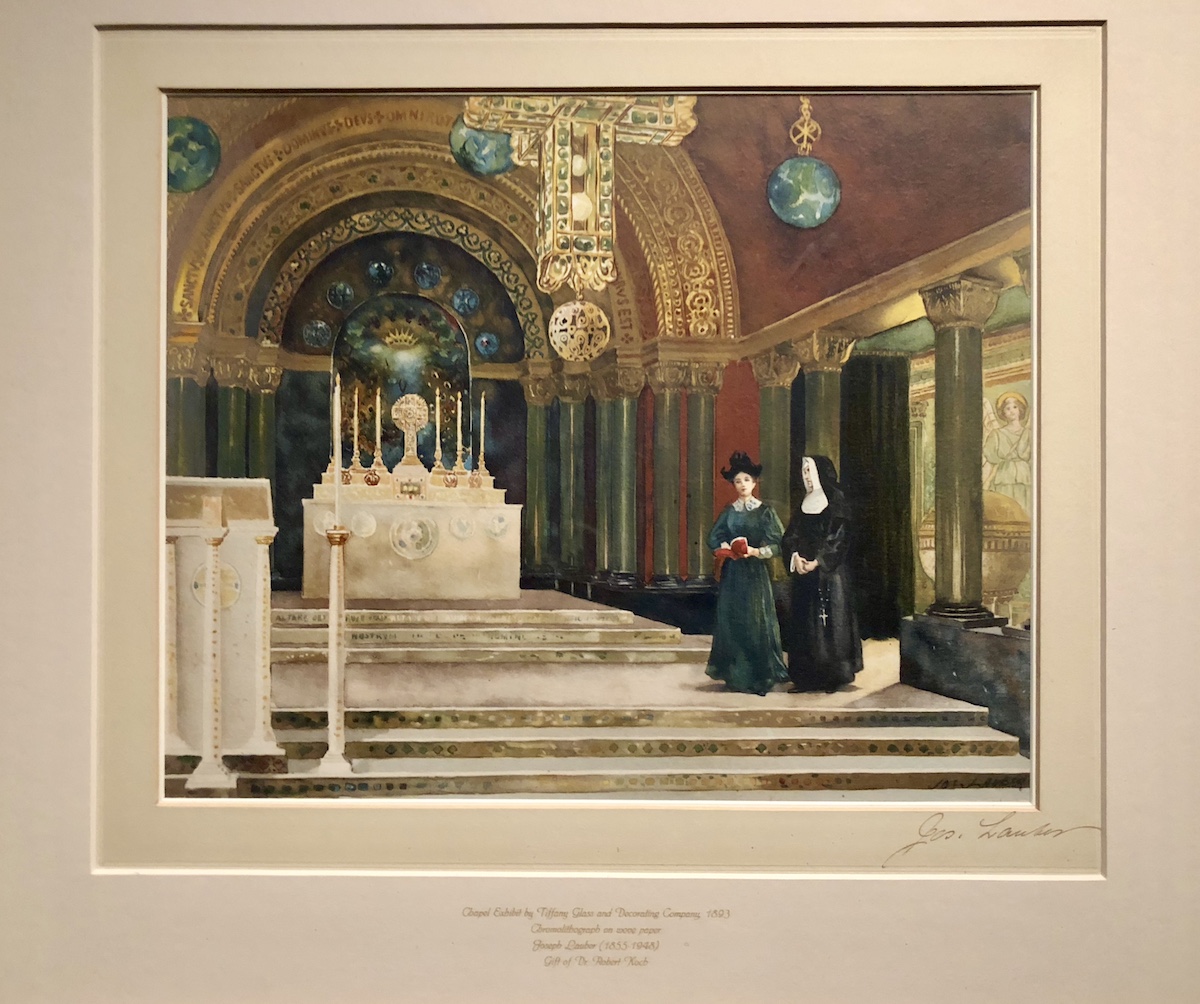 There are numerous sketches of the realization of the tinned glass and the numerous paintings in watercolor and oil. the book with the sketches arranged in collage and finished with watercolor could take your breath away. Showing the realization of the jewels meticulously worked by designs which look anything but simple, then in turned into actual jewelry, which is exhibited side by side which the papers in a glass case. 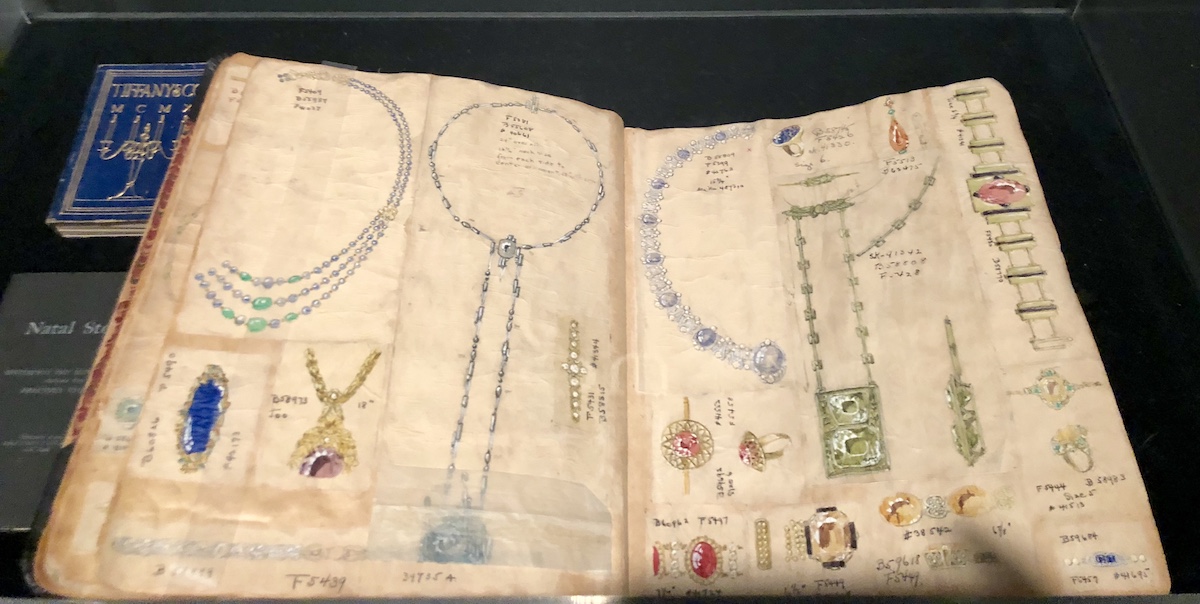 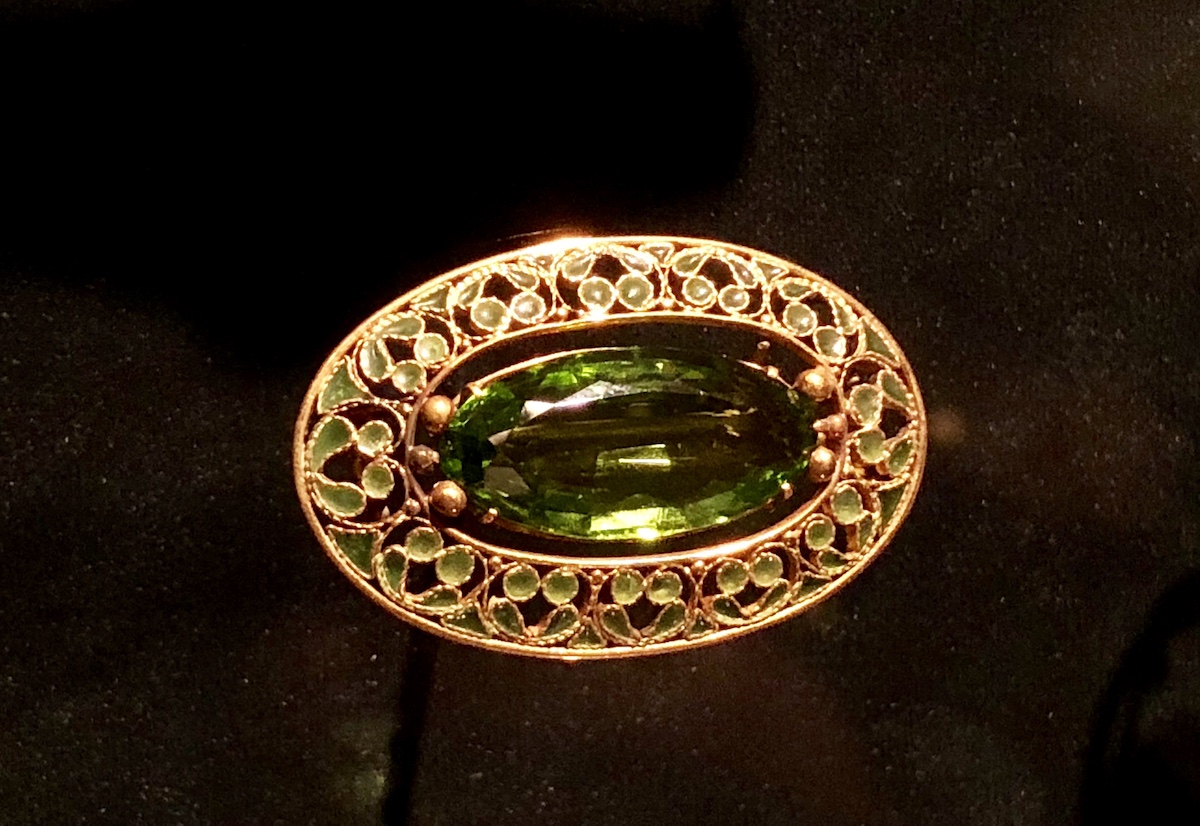 Beyond all this you can contemplate the art and architectural objects found in his country estate on Long Island, Laurelton Hall, of which some spaces have been rebuilt, including the Dining Room, the Living Room, the Reception Hall and part of the Daffodils Terrace , which served as a binder between the inside of the house, and the exterior, being made up simply of Carrara marble columns surmounted by concrete capitals finished with precious glass daffodils. 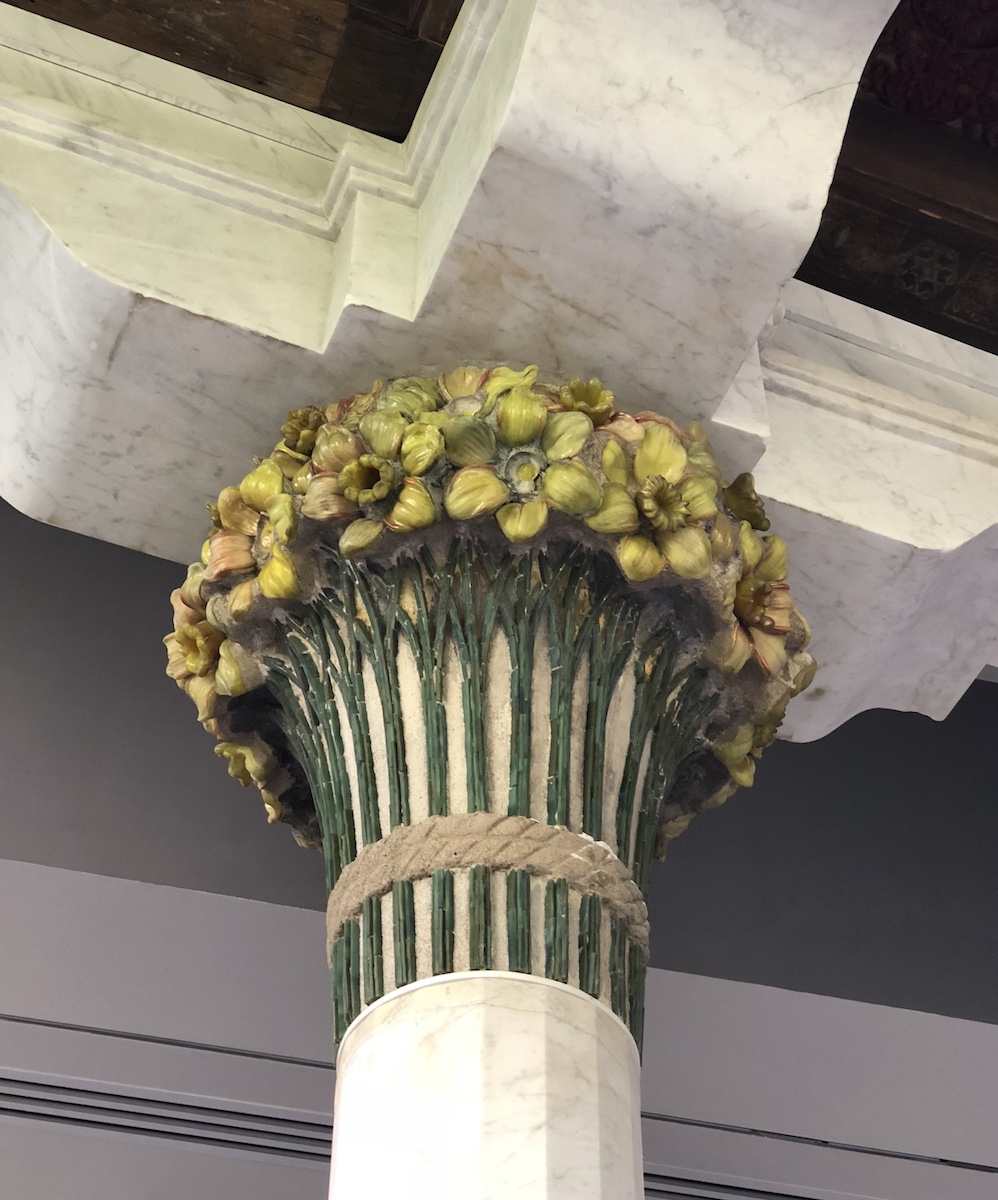 Wandering through the different rooms of the museum, subjugated by the charm of the environment you get to the rooms in which are collected works of art of the nineteenth century American contemporaries, beautiful landscapes and proud portraits of men, women and children who have made the history of the family and the museum. One of the most striking elements to  visitor’s eye not only because of the theatricality of the landscape but also because of the precision in details.  The Dome of the Yosemite, by Albert Bierstadt, commissioned by LeGrand Loockwood for his home in Connecticut, takes the viewer to look exactly from the artist’s point of view,  a majestic western landscape that includes the Yosemite waterfall, the north dome and the half dome of the nearby Columbia Rock. 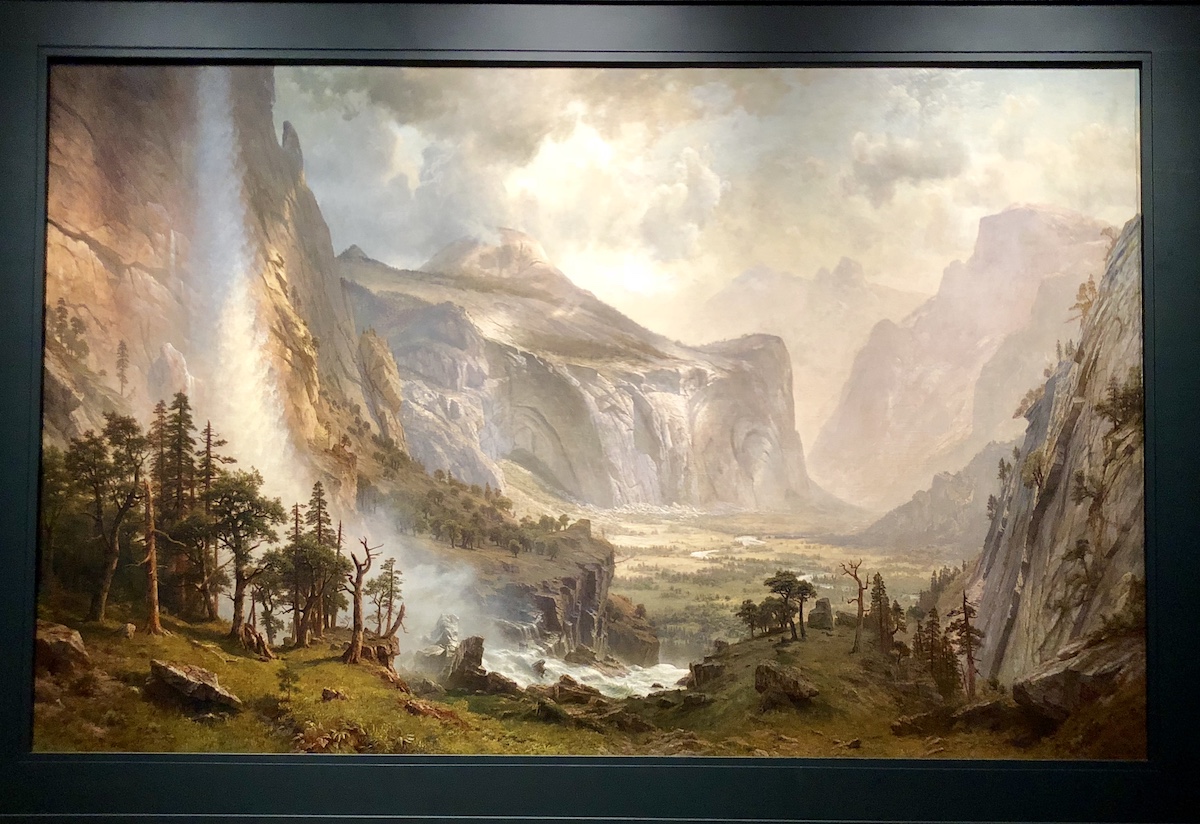