Fourth day of Realism Day, from the representation of the old masters to lectures, from criticism to artistic society, portraiture, still life and the winner of the Self Portrait Award. 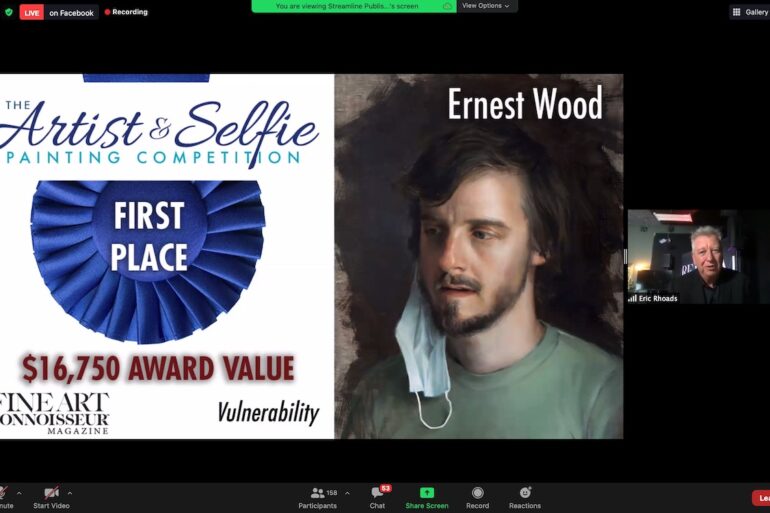 Last day of convention: after the surprise of Eric Rhoads as Bob Ross, artist and instructor beloved and adored by the American people, who passed away in 1995, the session of Graydon Parrish begins. A participant, yesterday said that Realism Live offers the possibility to get in touch (it would have been really live if the meeting hadn’t jumped because of the virus) with the great contemporary artists who will make the history of Realism and Graydon Parrish is one of them, as also mentioned by Professor Emeritus Jean Stern in the session on the history of Realism. Graydon Parrish, is a great supporter of color theory according to Albert H. Munsell which is based on Hue (the color, like red, yellow, etc. …), Value (the brightness or darkness of a color) and Chroma (the saturation or brilliance of a color determined by its distance from gray): a tidy system to identify and reproduce, as accurately as possible, every existing color. Based on this theory, Parrish partially reproduced a portrait on canvas (unfinished but original) by W.A. Bouguereau. Parrish argues that in painting it is necessary to know the drawing and anatomy but also to know the way the color reacts on the platform and “the planes of the head”, which characterize the works of the old master. Graydon Parrish supports a fundamental principle: “The first step in painting is to correct the value: this is a dogma. Moreover, according to the artist, the fundamental is the arrangement of the colors, which are very delicate, and it is therefore necessary to treat them accordingly while maintaining a precise and orderly palette. He does not claim to be a fast artist, on the contrary, he maintains that the success of the work is in the studio where it progresses and for which it is necessary to spend a lot of time.

Peter Trippi, held an interesting lecture with the focus on the situation that the epidemic has created: the cons, undoubtedly many and immense, which have particularly affected the largest segment of American society, the middle class; but also the pros that have seen the importance of realism increase even only from the classical drawing courses given in ateliers and academies but also online. To all this Peter Trippi, as an expert in the field and author of several books, has focused on some strategies that can help to improve the life of a realistic artist in time of pandemic, among them: the representation of current themes with realistic methods as done by Graydon Parrish with the gigantic work “The Cycle of Terror and Tragedy: September 11, 2001, or encouraging private collectors, such as the Bennett, to hold contests and economic prizes. (The) The Bennett Prize presented 2 years ago at FACE 2018, has registered, just in these days, the participation of 671 artists registered for what will be the event that will proclaim the winner of 2021. (per informazioni www.thebennettcollection.com).

The session of the Norwegian artist Odd Nerdrum was actually a short film, a documentary with a WOW effect directed by his two sons. The film, which allowed a glimpse through the dim light, the figure of the Norwegian artist, clearly addresses a pure and clear criticism of artistic society, the powerful, a criticism that I would call “Criticism of the Pure Reason of Nerdrum”, if it were not that Kant attributed the beginning of the decline of Aristotelian thought and society to Kant.: “The man who changed our heads”. Mentality that definitively brought the art world to ruin around the 1900, after the Universal Exhibition in Paris and the German mentality. And in addition to a philosophical discussion involving Aristotle, Kant, Hegel and Marx, his criticism becomes a parallelism in art history by making comparisons between works of classical and pure realism with the works of Jean Michel Basquiat, Andy Warhol or Roy Lichtenstein. A clear criticism that has spared no one, not even his students who have changed style over time and who hope to return to the Aristotelian principles as soon as possible. Odd Nerdrum is both an intellectual and a great artist, through symbolism he always leaves a halo of mystery in his works. After all, he has always had the mentality of an outsider for most of his artistic career, which led him to be expelled several times from art academies because of his ideas: “I had to paint in defiant of my era without the protection of the superstructures of the time,” says the artist.

Cornelia Hernes studied in various institutions around the world, she was a student of Odom Nerdrum herself and then moved and worked in her native Norway. On the occasion of the convention she partially reproduced the work “Solitude” proceeding for obvious reasons thanks to the fast-forward (like many other artists) that allowed her to dwell more on other topics. The key word of her demo is “the importance” given to lights and shadows and their interrelation in portraiture, to which she is very faithful moved by her interest in the expressiveness of the human face. Great artist who also holds workshops at the Salmagundi Club in New York, Hernes is the wife of another artist we met in these days: Stephen Baum.

The conclusion of the demonstration event takes place in the best possible way, with the great master Daniel Sprick, the silent artist. Helping himself exclusively with a wrist rest stick in the execution of the works, Sprick decided to “revitalize” a couple of his works made over time. In both cases they are landscape. That of revitalizing the works is a something that the artist does every now and then, he adds: “sometimes they improve sometimes they don’t… one always hopes they will, but it’s not because there are too many variations in the circle”. Daniel Sprick is one of the most mysterious artists Miami Niche has ever encountered. Whether it’s figurative art, still life or landscape art, Daniel Sprick’s work is equally exceptional. The mere light veiling or rubbing of a cloth, previously used to remove color, are able to dramatically change the atmosphere of the work.  Its precision in painting, essential in its narration, would be difficult to distinguish from a photograph, were it not for some deliberate brushstrokes.

At the end of the evening it’s finally time to proclaim the winner of the Self Portrait Award which, as made public in the evening by Eric Rhoads and Peter Trippi. is an award that will probably go down in the history of Realism Live and FACE.  The total premium which amounted to $ 44,000 was divided between the categories in contention. The overall winner of the prize, who did not have to split the $16,750, was Ernest Wood with the work “Vulnerability”: a tribute to the times ahead. Wood’s work will also be on the cover of the next edition of Fine Art Connoisseur Magazine.

The convention ended between the emotion of having participated in another great event organized by Eric Rhoads and Peter Trippi and the sadness of having already finished it. Stay connected with Miami Niche to get information about the upcoming events, the first of which will be Watercolor Live, for the first time in January, and to get to know more about the many characters you have already read and of which you will read from week to week.

(from the title: Vulnerability by Jeff Wood, First Place at the painting competition)