FACE (The Figurative Art Convention & Expo) has seen many faces this year coming from as many as 34 countries among which the United States and Canada.  This year debuted in the colors of blue and light blue with the beautiful Greek face that inhabits the A in the logo, adoring the colonial history of the city that hosted it. FACE is “A dream come true”, as Fine Art Connoisseur Publisher Eric Rhoads says, about his dream to make this conference happen, a feat others told him would be impossible to do. The experience is difficult to forget and now unthinkable to miss, made of passion, energy and history, because as was said in unison by the artists, at the end of the day it is the passion and history that make the difference, in art as in life.

The third edition of FACE took place at the Colonial Williamsburg Lodge in the beautiful colonial town of Williamsburg, which with the nearby Jamestown and Yorktown -Virginia – represent the historical triangle of America: the place from where it all began and that gave birth to 11 presidents of the United States of America. In Williamsburg in particular, history comes to life between artisanal workshops and costumed characters who also posed for FACE guests, in an en plein air session during the Veteran’s Day parade. 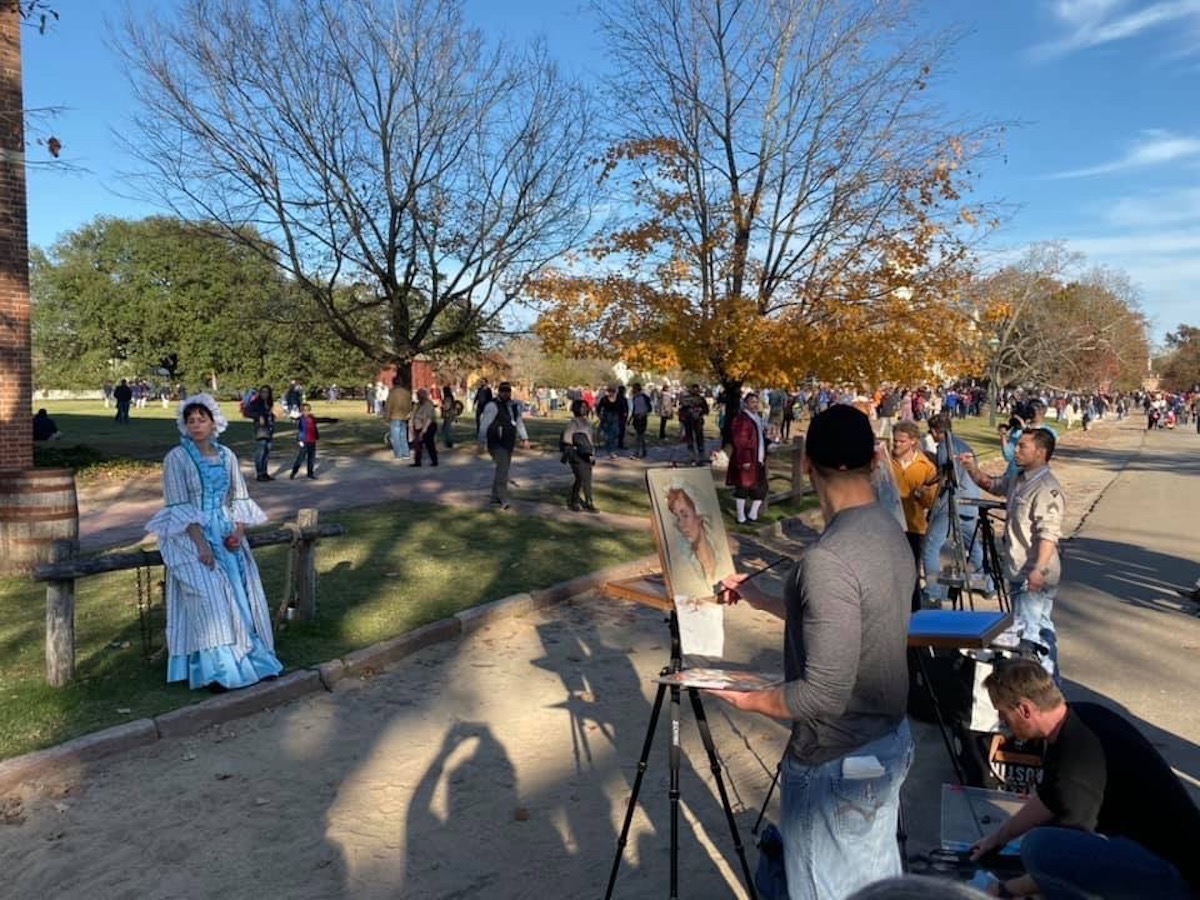 Plain air sessions during the Veteran’s Day (Streamline Photo Credits)FACE has been confirmed, by this writer, as the authoritative event of Fine Arts with an annual cadence absolutely not to be missed for lovers of realistic and figurative art, for collectors, for enthusiasts and also for newbies who approach this world maybe because they had to give up a dream in their youth.

Being part of FACE means entering a world composed of old and good artistic practices, made of study of proportions, color theory, study of design and technicalities that allow you to define a chiaroscuro rather than an non finito (unfinished). But it is also much more: it is the realization of a realistic work of art in extremely limited timeframes for the artistic genre in question; it is a show that in the combination with signs on canvas, knows how to overwhelm the viewer who attends it, from nothing to the completion of a face or a body capable of transmitting vibrations and feeling.

FACE is also charitable: For every demo carried out follows the exhibition and sale of the works produced, whose proceeds are donated in part to the construction of houses for the homeless, and in part are destined for the scholarships, that this year were six.

FACE is actually much more than a convention and this year saw the participation of more than forty faculty members, among artists and speakers experienced in the field, who interspersed between live demonstrations, panel discussion and marketing sections. Art collectors also participated, who, like the founders and participants of FACE believe in contemporary realism, including Ann and Jim Belk collectors from nearby Richmond and the inevitable founders of the Bennet Prize, Steven Alan Bennet and the wife Doc.Elaine Melotti Schmidt who among other things offered a rich welcome cocktail on the opening night. In addition to them many speakers: Laura Barry representing the wonderful Art Museum of Colonial Williamsburg (a gem not to be missed), John Wurdeman gallery worker and expert on 20th century Russian art, John T. Spike American art critic and well-known writer for his focus on the old-masters before the 1800s and a wide range of modern artists, and many other names still. Among them the inevitable Peter Trippi and Eric Rhoads: the minds that have devised and realized FACE. “A chance meeting,” says Eric Rhoads, moved as he recalls his meeting with Peter Trippi, 13 years ago in New York, following which a great friendship was born that brought them even closer to the artistic vision that gave rise to FACE: an event that In addition to restoring dignity to figurative realism, for too many years outclassed by modern and contemporary art, it offers the opportunity to live the experience of an artistic atelier.

FACE serves as an inexhaustible source of inspiration and knowledge, which allows experts to share and learn about the methodologies, approaches and techniques of other artists -as a kind of intense refresher course-; and to the less experienced it offers the opportunity to learn from the great technical masters and tips in an academic way. FACE is a way to approach the concept of art imparted in the ateliers that recall for methodology and dynamics, just like the workshops of the past: a pure, sincere and more concrete means of learning the secrets of the great artists of Contemporary Realism.

Although at the base of FACE, as Eric Rhoads reminds us, there is fun and sharing of the same passion, the times of FACE are a real immersion in the art world. The day begins at 8 a.m. to attend the Main Stage where Eric Rhoads, supported by the magnificent Streamline team (in the recognizable blue t-shirt) tells anecdotes and vicissitudes in a kind of Sunday Coffee live: fun and exciting. In addition, helped by the public, every morning there’s a lottery draw with the names of the winners of the rich prizes made available by the sponsors of the event: the brushes of Rosemary & Co, the beautiful oil colors of Michael Harding, the educational DVDs of Streamline, or the Edge’s fancy palettes to name a few. The lucky selected who, -WARNING FOR NEXT YEAR-, must be present in the room, can take home professional goods worth hundreds of dollars.

The day then proceeds with the possibility of choosing between a demo (there are up to three demos held by three different artists at the same time) or alternatively one of the theoretical-cultural lessons. The themes of this year’s cultural seminars were, in addition to the authoritative marketing lectures given by Eric Rhoads: the seminar on Russian art by John Wurdeman, an expert on Russian art and gallery workers, a course taught by Constance Bowden on how to build his own Jennifer Kirby and David Tanner’s workshops and practical notions of how to learn how to sell their art differently than the traditional approach.

Lunch and dinner, are moments left in freedom but can constitute a further moment of exchange with the artists with whom you can interact, or with old friendships born and grown over time with which to share the same passion.

For those who are not yet filled, in the evening there is the possibility to do live painting with models or attend the talk moderated by Peter Trippi during which authoritative characters have taken stock of the situation of how contemporary realism can find the right place in the mercenary world of current art, made of hyperbolic millionaire figures that suggest virtuosity in the art market, in crisis like all other sectors. Among the various issues raised related to contemporary realism are undoubtedly the poor culture (imparted in schools and through the media) and globalization that sees art as a status symbol, favoring the rise of a “unprepared collection” ” which imposed new rules of the game causing a radical flattening of the taste.

Painting sessions for figurative artists are an experience within the experience: an equally useful way to practice in the presence of other artists and enthusiasts with whom share their techniques and tricks. It takes the artists’ back in time in memory of the academy or better yet to the artistic botteghe of the past where they were put through individual practices, pure simple experiences, we learn the diligence of the Fine Arts in comparison and sharing. 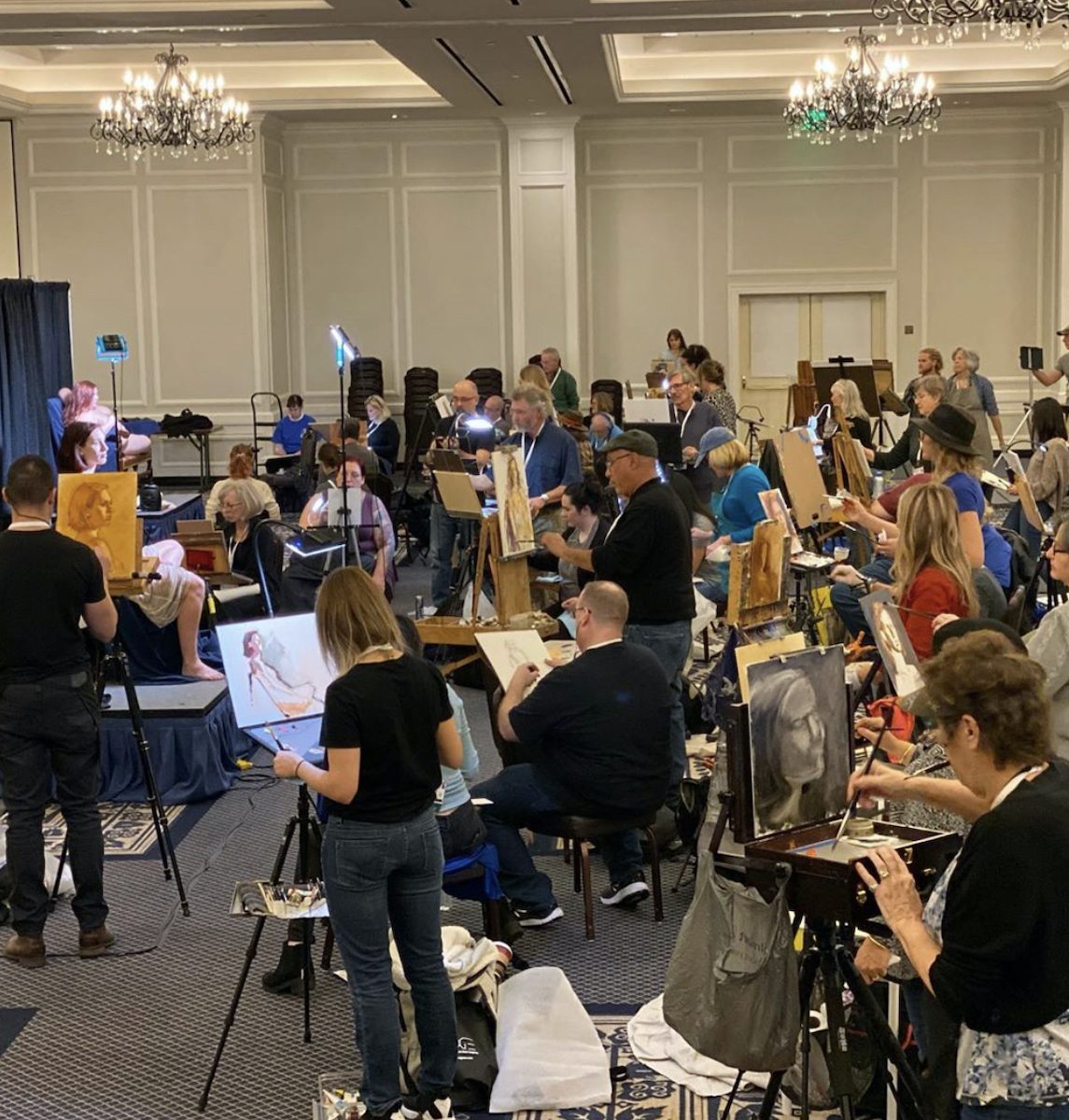 A really exceptional range of options supported by equally good models who have posed for long sessions, both nude and costumed, among them the very good Keira Leilani, Joe Polak and Dan Hawkins. Professional models like the Streamline team that, as a united family, supported FACE in terms of administration, logistics, audio and video footage, practical help on site, and availability.

To finish the convention in style, the drum roll and the flute of Williamsburg costumed musicians introduced Eric Rhoads who unveiled the location of FACE 2020 which will be held in Baltimore from October 29 to November 1, 2020, and which includes top names: Juliette Aristides, Quang Ho, Rick Casali, Adrienne Stein, Virgil Elliott, Rose Frantzen, Huihan Liu and Mary Whyte, among the participants.

The convention ended on the notes of Musical Easels, a session-show put in place by Casey Baugh and Reisha Perlmutter, couple on stage as well as in life, who made two canvases on which they worked alternating to the change of the chosen music .

In anticipation of the fourth edition of FACE in Baltimore, articles about some of the artists attending the convention will follow periodically. Not to be unfair to the absentees, with whom there will be opportunity to deepen in the future. For those who just don’t want to wait a year to relive the excitement of FACE, you can sign up for PACE (Plein Air Convention and Expo), organized by the inevitable Eric Rhoads (who is an artist by the way) and who will see him engaged from May 2nd  to 6th in Denver, Colorado. 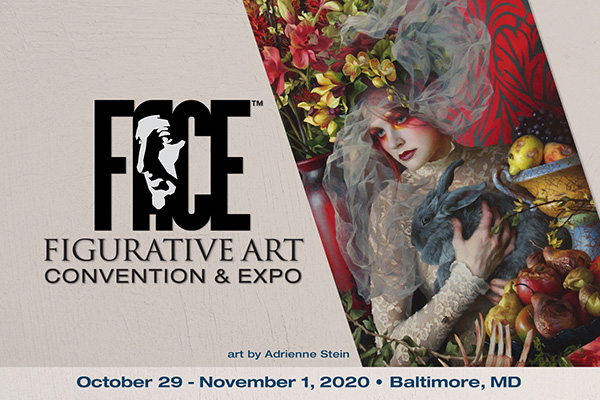 1 thought on “Face to FACE: Where Art Dreams Come True.”