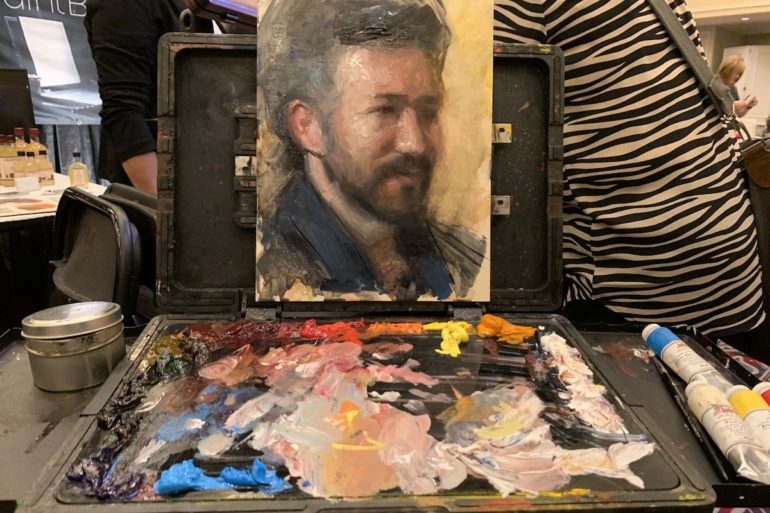 FACE 2019 -Figurative Arts Convention and Expo- America’s largest figurative art convention, which brings together great artists, collectors and enthusiasts, presented for the second year in a row the New York artist Casey Baugh, who has proved once again to be a great artist.

Baugh is undoubtedly a talent to take on the spot, with the same speed with which he moves, experiments, paints: a tornado that interacts with its interlocutors in an outspoken and honest way. He also showed his honesty when, with Musical Easel, the closing show of the convention in which he duetted with Reisha Perlmutter, (another talented artist present at FACE 2019 and Baugh’s life partner) he answered questions from the curious and fascinated audience both from the musical performance that dictated the alternation of the artists, as well as from their love story for which the questions were not wasted. For Casey Baugh, experimentation is fundamental, and Musical Easel was the proof: a very interesting role play, a dance able to revitalize and increase its reach.  says Casey Baugh.

After meeting him at the FACE demo last year, I got to interact with him in a two-day pre-convention course, with totally different timelines for each artist than during the FACE sessions. Casey Baugh, dispensed information, and advice proceeding according to his usual way of working: he ranged from the realization of the work, starting from the basics (with photo shoot and short course of creative photography) to the use of Lightroom that Baugh uses to design the images to be represented, and then proceeds to draft the selected image on canvas.

After making it clear that it is essential to know how to live paint , Baugh reiterated how important photography painting is also, highlighting that the photo should not be copied but be a source of inspiration for the artist. He then gave a long lesson about the importance of light and distance from the subject, revealing the behind-the-scenes of his creative process also in the digital field: the artist has a preference for underexposed shots but for each photograph he also elaborates the original and overexposed it, as if you were taking a photograph in HDR, so you don’t lose even a color gradient in the wide spectrum used. After cutting and rotating the image, and displaying hundreds of shots the final choice comes. The technical phase, composed of the search for the perfect shot, among many and in every respect, follows the toning of photography in more or less warm tones that know how to highlight the areas of soft light that envelops or rests on the figure, preventively studied in the environment, in clothing and accessories: these elements that contribute to the final result that as he says: “Painting in an artistic process takes up only 20% of the time, the rest is preparation”.

In addition to the preparatory suggestions, of course, good working tools are needed: great colors (Baugh normally uses different brands due to the different density), the medium: the phantasmagorical Prohibition, the Edge easel and the brushes Rosemary of which Casey Baugh is also a sponsor. With Rosemary, in addition to making demonstration videos, he has created his own custom line of brushes that allows him to imitate in all his way of spreading the color on the canvas.

But if last year’s way of making the demo almost showed a sense of restlessness, this year the disquiet has been replaced by the definition of 100% pure energy that he knows masterfully manifest both in the way of moving and communicating and in the approach to the canvas.

Although FACE is not an easy stage to manage, as the artist works on canvas in a short time and, at the same time, tells his way of making art, Casey Baugh describes himself as a fervent supporter of the realization of works in a fast way: “Having little time is a great opportunity to find immediate solutions that are most often centered” says Baugh.

Casey Baugh is a revolutionary artist capable of completely breaking the rules of traditional painting, while remaining faithful to himself, with an all-personal approach, the result of many years of study and practice, which he started when he was a child: he sold his first work of art to his neighbor at the age of seventeen and set up his first solo show at the age of 25. He emulated the greats of art, among them Sargent and Sorolla (some of his favorites) and if his sources of inspiration are photography, poetry and film-making, he recognizes that it is essential to inspire the outside world but always looking within himself  for the authenticity and uniqueness of one’s point of view.

Casey Baugh always dresses in black, black as the darkest shade that takes shape on the palette alla prima, a pictorial virtuosity with which he proceeds by tracing clutter and marking shadows, and then adding the colors that develop in clearer tones, having already available the shadowy part of the face.

Painting alla prima, the immediate pictorial writing, which requires an excellent mastery of the technique, proceeding without mediation of under-drawing, is a specialty that Casey Baugh has experimented with his master and mentor, Richard Schmid for over ten years. A partnership that lasted many years, and clearly perceptible in the video (purchasable on Casey Baugh’s website) in which the artist performs a charcoal portrait of Schmid. During the laying session, with an intimate dialogue the two artists tell each other’s choices, motivations and passions related to the love for charcoal drawing that does not represent the means through which to splash on the canvas and then proceed with the color, but it is an artistic technique of its own, extremely fascinating and timeless.

Casey Baugh has worked on charcoal for many years, calling it “his first love” and not surprisingly in the calendar of the annual workshops that engage him around the world, he always reserves special sections for this technique that this year will be held in February in Downtown Los Angeles, in March at his art studio in Brooklyn and in London in August.

Baugh is also famous for his nightly workshops on the streets of New York, which in 2020 will see him engaged, in addition to Los Angeles, also in Paris and Berlin. Among the evocative stages of his itinerary will be Iceland where he will capture the mysterious nature of this wild land. A great opportunity for those who, living in Italy and Europe more generally, want to carry out a course with him without moving to the other side of the world and a great chance for Americans artists to experience Europe in a decidedly different way.

According to Casey Baugh, there are seven fundamental elements of an artistic composition, which he himself mentions in order of importance: history, first of all, because without history there is no credibility, he calls himself a realistic-narrative artist: “It is the story behind the painting that allows you to sell a work to six or eight zeroes and unfortunately the value of a work does not always coincide with the high skills of the artist, that’s why telling a story becomes fundamental”. The composition, on the other hand, the second element represents for the artist the secret of a work: the invisible magnet that knows how to direct the rest of the components as if it were a musical quartet in which the individual instruments contribute to the search for balance. The value is the third element that, identifying how much lighter and darker one area is compared to another, it allows the artist to research and recreate the nuances in the middle. The color, the element composed essentially of the combination of yellow, red and blue, which, interacting with each other, create a varied spectrum of nuances. The proportions, the contour, the edge, which can be sweet or cut, and the texture that is what is able to make the difference between a photograph and the artwork, are the remaining essential elements.

Between those who paint for the pleasure of creating, regardless of the result, and those who instead paint for the result, Casey Baugh with his art is able to change people’s lives and mentality because painting is a kind of manipulation of life and if we realize the extent of this power, then the perspective changes markedly.

(On the title: Portrait of Casey Baugh by Reisha Perlmutter)


YOU CAN READ THE DESCRIPTION IN SPANISH AND ENGLIS

ATTENTION: You can find the Spanish and Italian ve