FabrianoInAcquarello: unity of purpose and variety of expression under the banner of art. 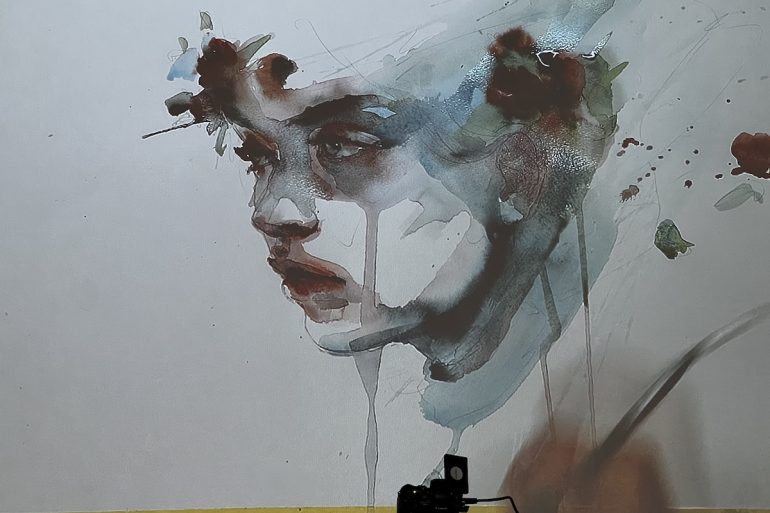 It was Giuseppe Prezioso -Fabriano marketing manager for Fedrigoni Group- and artist Davide Siddi who got to the heart of the events of the third day of FabrianoInAcquarello.

They did so with a historical presentation of different types of paper and a practical demonstration on “Artistico” paper specially designed for watercolor painting.

The historic company, founded in 1264, has traced important developments in the field of paper and its use over time. The watermark is an example of this. A watermark is that translucent pattern, or writing imprinted on the surface of paper, visible when the paper is held up to the light. An invention of Fabriano experts that has been celebrated and respected around the world since the 13th century as a trademark by artisans and, later, as an anti-counterfeiting security feature. In his historical and technical presentation, Giuseppe Prezioso illustrated how the technical processes of paper production have an important impact on the yield of pigment, which also deserves attention in relation to the type of subject to be depicted, which prefers the use of a satin paper-for example-rather than fine- or coarse-grained. Davide Siddi, an Italian artist who boasts the exhibition of one of his paintings in the Watercolor Museum, currently on display at the “Museum of Paper and Watermark” in Fabriano, on the other hand, led a practical demonstration in parallel on the reaction of pigment according to the grain size of Artistico paper. “I recommend always experimenting with the quality of the paper with the wet-on-wet technique, which allows you to understand in which way to approach the pigment application,” Siddi said in this regard.

A major player in the American watercolor scene Keiko Tanabe prefers plein air painting to studio painting. In her demo, always rich in technical information, she has executed three different subjects: a view of Venice, a place she recently visited; the square of Fabriano; and a group of artists in plein air in the landscape of Palermo. While in the drafting of color she proceeds with the tonal gradation of the atmosphere, on which she then builds volumes and defines details, in the rest of the composition she takes the necessary risks to emphasize the emotional dimension of the painting. “I believe that the artist’s task is not to slavishly represent reality, but rather to show the motivations that lead the artist to choose a subject and to the emotions that arise from the painting process that are more important than the composition itself,” the artist argues. The motivation that led her to choose the three representations of Italy is the joy that comes from the relationship she has established over the years with the country and gratitude to the organization that keeps the tradition of FabrianoInAcquarello alive.

There are artists who verbally express their thought processes during the demonstration session, and there are others who prefer to delegate their thoughts to gestures and color harmony. The Italian Cecile Agnes is one of them. In her demonstration for Wilson & Newton she let her even fleeting brushstrokes “skim” the paper with small touches of transparent color that overlapped thanks also to her abundant use of water.

In her compositional process she not only let the color drippings take their course but even favored the process by arranging the sheet vertically making them the protagonists of the composition for the poetic rendering of the work that focuses on the definition of the eyes with almost real expressiveness.

The daily workshop session, was chaired by internationally renowned artist and architect Giuseppe Mazzara who, for the demo, turned the spotlight on the composition of the human figure.  While firmly rooted in the roots of 20th-century Italian art, the artist chose to treat the theme through the depiction of the poses of a ballerina, a subject so dear to French artists of the late 18th and 19th centuries, including Edgar Degas and Pierre-Auguste Renoir. Mazzara, had the model pose in different demonstration sessions of short duration -5/10 minutes maximum- depending on the complexity of the pose and then provided suggestions to the audience and by viewing the works of individual workshop participants he offered personalized critique sessions, which are always useful to focus on any errors in composition. The purpose of the short posing sessions is to help artists make compositional decisions and focus on the essential lines that define the human figure.

It was the acclaimed artist Angelo Gorlini, mentor to many prominent artists who have been helped to open their minds in favor of free and more expressive painting, who on this occasion made the demonstration for Renassans, Apa-Polska. Angelo Gorlini himself in his practice abandoned formal pictorial composition in favor of freedom of emotional expression. According to Gorlini, “If one wishes to reach a higher level of painting, it is necessary to abandon all mental and technical guesswork that leads one to have expectations, in favor of freedom of expression.”  For the Renassans, Apa-Polska made a double demonstration in which they used special products developed by the Polish brand in collaboration with the University of Agriculture. In the first demonstration, in black and white, he used a special charcoal added to gum arabic with which he interpreted the dreary atmosphere of a rainy day reworked in a sublime way, through the drafting of tonal values alone.  “It is essential to paint while having fun, without starting out with the expectation of making a perfect work and therefore devoting no more than twenty minutes to it. After that if you like the work, it’s fine, otherwise you start over. Only in this way will you have a chance to improve,” says the artist, who made a second color demonstration using a special water-repellent masking powder that put before the pigment is applied helps to preserve the light areas, which, when removed with the use of the fingers, can be colored differently creating atmosphere, also thanks to his abundant use of water. According to Gorlini, there are four salient points to consider in watercolor painting: abundant use of color, water, time of intervention according to the artist’s personal sensibility, and hope.

Peruvian artist Nicolas Lopez did a hands-on demonstration with Daniel Smith paints. Lopez created, from the blank sheet of paper, a fascinating excerpt of a black-and-white cityscape in which it is the water that does the most important work while the artist is tasked with knowing the water load in the brush bristles and then managing its pressure on the paper. At the same time, Laurin MacCraken , FabrianoInAquarello’s leader for the United States of America, spoke about “McCracken Black,” a very intense, non-reflective shade of black developed in collaboration with Joe Cogley, owner and CEO of the Daniel Smith company. Laurin McCracken said he was fascinated by the dark shades used by his favorite artist, Willem Kalf, one of the most important Dutch still life painters of the 17th century. He then sought to reproduce the same quality of fully opaque, anti-reflective black that he developed by combining eight different pigments and that Joe Cogley later introduced into the Daniel Smith palette under the name “McCraken Black.” Laurin McCracken, an artist and familiar face among the organizers of FabrianoInAquarello, also provided some technical tips for applying this particular color that he usually uses in his still life paintings. Black McCracken is based on the use of a little hot water in which to dilute the color while the drafting on sheet must be done in a rigorous and non-stop manner starting from an angle on the sheet. A process that requires patience but offers guaranteed results if spread properly.

A jazz musician and composer for over forty years, Roberto Andreoli wanted to pay tribute to Jim Hall: one of the greatest jazz musicians whose innovative and inimitable approach made music a vehicle for peace and a means of sharing knowledge.

As Jim Hall did in music, Roberto Andreoli tried to keep his painting styles as fresh as possible by relying on subjective interpretation of emotions. After previously making the basic lines of the drawing, he began to emphasize the subject’s complexion by paying particular attention to the musician’s face and hands. The pressure of the brush moving sinuously across the sheet exactly as the artist’s hands approach playing the guitar strings -only hinted at in Andreoli’s color composition- alternated between laying down warm colors and  cold colors. While the physiognomy is thickened with chromatic details that highlight the knuckles and expressiveness of the face, the warm colors of the jacket accompany the composition of the figure that emerges like a pop up from the abstract realization of the background.

The last artistic performance of the day, that of Pinuccia Tartarin, was accompanied by the notes of Chopin. Tartarin made an excerpt of a woodland landscape in which to the previously prepared background, she literally sprayed with vigor the color in the direction of the composition on the paper so as to recreate-with textural consistency-the foliage and undergrowth. Vigor she alternated with the soft working of the angles, searched and lost with which she completed the composition.

The FabrianoInAcquarello convention, held this year at the FICO Convention Center in Bologna for purely organizational and capacity reasons-given the large audience participation-will return to Fabriano’s hometown tomorrow to celebrate the last day of the convention. Follow us, we at Miami Niche will introduce you to the pleasure of history in the magical city of Fabriano, where everything was born.

(on the title, a frame from Cecile Agnes’work in progress )