FabrianoInAcquarello between urban sketching, portraiture, still life and landscape with a focus on paper, Fabriano of course. 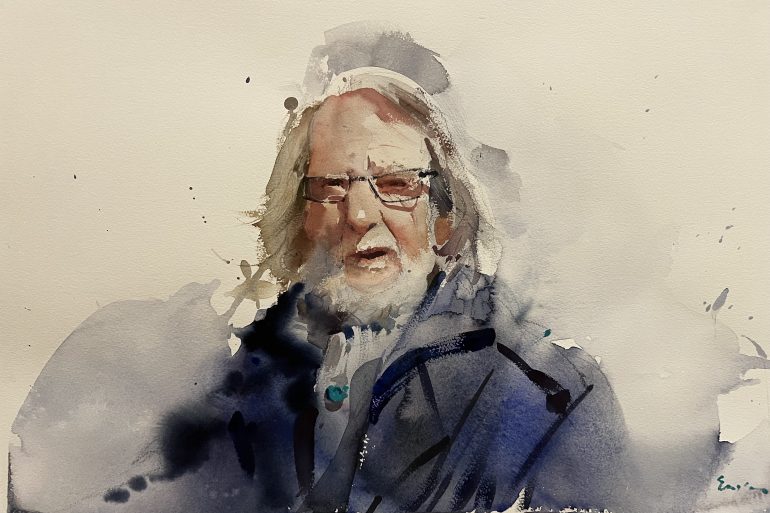 It was the Venetian artist Barnaba Salvador, who officially opened the second day of Fabriano InAcquarello 2022, the convention entirely dedicated to the technique of water painting on paper, born -as reiterated, by the founder, the visionary Anna Massinissa- with the intention of breaking down any kind of social or cultural barrier that hinders dialogue, friendship and sharing. These are cornerstones of which art, which is considered a heritage of humanity, promotes. “The purpose of art is to create relationships not only between the art and the artists, but between all users who in some way take part in the process,” said Anna Massinissa, creator of the project that has revolutionized the social world of watercolor, who adds, “Art is the key to understanding, it should not be the ‘vision’ but rather the ‘attitude’ and as such it should facilitate social relations under the banner of inclusiveness and peace.”

Barnaba Salvador is a watercolorist with a passion for Carnet de Voyage, who for the occasion created a demonstration in collaboration with partner companies of German origin, DaVinci and Schmincke. Salvador’s passion for comics and subsequent art studies have led him to find the highest artistic expression in “Carnet de Voyage” with which he travels the world conducting workshops and demonstrations.  For the making of the demo -a carnet de voyage-style backyard excerpt- he used Da Vinci’s Colineo brushes and Schmincke’s new HORADAM® AQUARELL granulated colors. This type of pigment, already available in a range of 40 colors (marked by the letter G on the packaging), joins the already present traditional range of watercolors that makes up Schmincke’s varied palette. The uniqueness of the granulated colors is due to the fact that each one is made with two different pigments that not only offer greater brilliance but also ensure high control of the color flow. Barnaba Salvador, with his sympathy, confessed the secret with which he makes particular patterns: it is a special protective liquid for soccer shoes. Confession that aroused the amazement of the audience pleasantly surprised by the artist’s genuineness. However, the head of Schmincke, who was present in the courtroom, anticipated that in 2023 the new liquid specially designed to meet the needs of Barnabas Salvador and all those artists who, by their nature, are constantly looking for new means of expression will be proposed.

The opportunity to interact directly with representatives of the various market brands who provide technical information regarding existing materials and new products is another key part of the convention. Demonstrations made by artists for pigment and brush manufacturers are in fact equally important to the Masters Artist demonstration sessions, because they offer useful and interesting information.

Women are honored with the demonstration of Master Artist Ekaterina Maltseva, originally from Russia, a country in which she studied art in an exalted manner according to the strict parameters of Russian academies and later moved to Italy. Maltseva’s demonstration, in addition to highlighting the artist’s gifts of empathy, showed how the depiction of the subject is a consequence of the natural flow of emotions aroused by the subject, in this case by the orchid, her favorite flower. “Each flower possesses its own personality, like the human being, and it is the artist who must grasp its peculiarities,” says Maltseva, who considers the artistic work a projection of the painter. The result of the negative approach to pictorial composition is a poetic vision in which individual elements are highlighted. An example of this are the small bulbs accompanying the already blooming flowers, which the artist derives from the dry use of a clean brush. The fragility of the flower petals is also sublimely and vibrantly depicted, and perfectly renders the idea of the fragility of this flower. The artist’s technical demonstration, working wet-on-wet, is a continuous taking off and on of pigments and water in search of the shapes and harmonious balance of colors that she lets interact with each other at the end of the composition. Maltseva says she performs a multiplicity of preparatory sketches before making the final work. According to the artist, it is important not to aim at the sterile representation of the subject but at the interpretation of the feeling that is established between the artist and the subject. Feeling in which the harmony of forms (the spots from which she starts to “seal” the feeling in a continuous work in progress) and the rhythm of the composition are essential elements that contribute to the success of the work.

Italian artist Luciano Colucci created a demonstration for Royal Talens. An eclectic artist who self-describes as: “a curious creative, who loves to break the rules,” Colucci was assisted in the demo by Royal Talens Technical Adviser-and Royal Talens ambassador for Switzerland-Kaha von Smik. In the demonstration session, he created several works in which he used the three types of watercolor produced by the Dutch company: the Rembrandt, which represent the top of the range in terms of pigment purity; the Van Gogh, the watercolors with excellent value for money, mostly recommended for beginners; and the new FINTEC watercolors. The FINTECs, made from natural mica, are pearlescent, iridescent, and metallic colors designed specifically for calligraphy and lettering, which, thanks to their particular sheen, have become an excellent tool for rendering special effects capable of enriching watercolor compositions, as demonstrated by Colucci in the triple demonstration.

FabrianoInAquarello in addition to being the medium of interaction with which to share time, techniques and perspectives dedicated to watercolor is also a medium through which to focus on concepts concerning the artist’s psycho-physical well-being and his/her way of perceiving nature and consequently the essence of art. “Making art is not only painting or drawing but is above all observing carefully. Most of the time we are blind in the way we look,” said Indian artist Atul Panase, who through practical exercises led participants into a new perspective that highlights a different reading of reality in which imagination plays an equally important role.

The daily workshop session focused on portraiture and its composition. Special guest was Piedmontese artist Lorena Massa, who considers portraiture the most talkative and representative part of the human nature. The artist presented some of her meaning-laden works, which charted her artistic journey. In the amiably explained portraits, in which the stories of the subjects depicted take on universal significance, the perspective and composition of the image play a key role in highlighting the narrative. Narrative that involves compositional choices depending on the message the artist wants to communicate. With the help of a model, Massa literally narrowed and enlarged the field of vision to be focused on through the use of practical passe-partouts, designed for the purpose and open on both angles, so as to facilitate movement. Massa said she routinely uses this approach to composition because it is very useful in finding the narrative key with which to tell the subject’s story. The approach has also allowed her, in some cases, to “levitate” elements that are entirely incidental and therefore misleading in the telling of the story. In this way she has shown how it is possible to break free from the canonical 30 x 40 cm vertical format to realize endless compositional possibilities that allow the narrative to focus on the eyes rather than on the very close-up of the face pointing to the future or the past, thus creating the pathos necessary to arouse the viewer’s interest. Among the various suggestions bestowed by the artist is not to put the face in a central position on the sheet-practice that she considers communicatively somewhat obvious and sterile-in favor of representing the face on the different sides of the sheet, so as to create more interesting narrative perspectives.

Eudes Correia is an ambassador for Windsor & Newton, and for FabrianoInAcquarello he has created a portrait with strong poetic value, inspired by a photograph of an elderly gentleman marked by the wrinkles of time. The Brazilian artist known for his portraits is admired for his skill in depicting the faces of the “invisible,” so dramatically and poetically marked by personal experiences: invisible to people’s eyes and magically protagonists in the imagination of this utterly singular artist. Correia approaches watercolor in a different way: he is almost brutal in the realization of the background and is able to refine in an over-the-top manner the complexion and the smallest details with which he is able to transform the pictorial work into an expressive masterpiece with a strong emotional impact. A singular artist Correio, he expressly stated that he could not work without the “suedade,” the melancholic and nostalgic music typical of Brazil, which at one point he wanted to share with the audience, arousing the enthusiasm of the participants, some of them Portuguese and Brazilians, who joined in the chorus.

The Fabriano company, the event’s main sponsor, got into the swing of the presentations with a special guest speaker and profound connoisseur of materials: Pierre Guidetti, the face of Savoir-Faire (follow him live every Friday on Instagram: @artsavoirfaire). Pierre clearly and concisely explained the important topic of paper. Highlighting the existing types of paper, he dwelt on the importance from Artistico paper, made of 100% cotton, available in two colors-white and extra-white-and in three different types of graininess-satin (or compressed), fine grain, coarse grain. Demonstrating the extraordinary qualities in the rendering of Fabriano Artistico, three noteworthy personalities-Lana Privitera, Didier George, and the young and talented Mona Omrani-were present to highlight its peculiarities.

“The great thing about watercolor is that it paints itself,” said Anders Anderson in the closing session of the day. The technical knowledge and practicality of Anderson’s teachings also stem in part from his engineering studies, which have enabled him to solve sometimes tedious issues in a practical way. Anderson summarized the periodic process of satisfaction alternating with discouragement, inherent in the artist’s nature, in a very simple scheme in which energy and time are the key components and to which the artist concisely stated, “you simply have to believe in what you do.”

There were numerous pieces of advice dispensed by the artist during the session. Among them he suggested using a red viewcatcher that helps determine composition, cropping images and identifying the tonal values of colors, which are fundamental to the correct execution of the work. Also, in order to avoid using oxidized pigments, he recommended using fresh colors taken directly from the tubes.

The day came to an end, and Miami Niche looks forward to seeing you tomorrow to lead you, hand in hand, on the second day of FabrianoInAcquarello.