FabrianoInAcquarello, a return to the roots with the long paint session and the presentation of recognition awards. 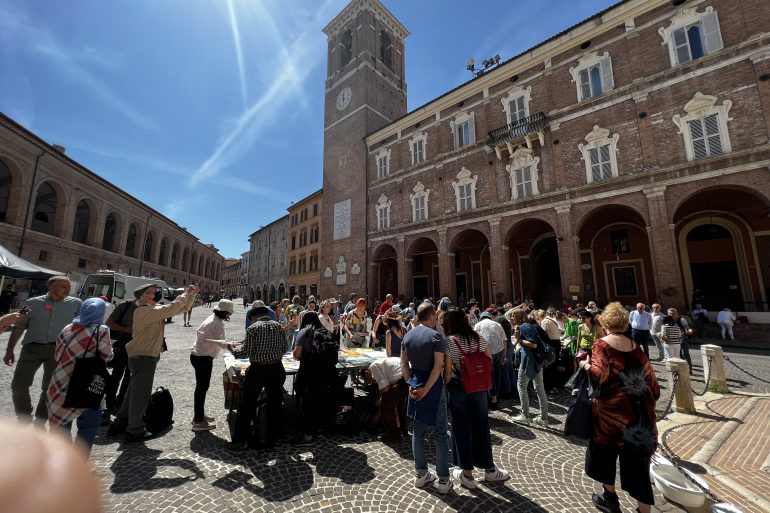 The final day of the FabrianoInAcquarello event returned to the land where it all began several years ago: Fabriano, the city of paper.

It was the FabrianoInAcquarello team and the warm welcome of the locals, who were eagerly awaiting the return of this exceptional event in person, who welcomed the participants, who arrived by bus from Bologna.  Locals were not disappointed this year and returned to see the Piazza del Comune filled with artists who painted in joy and friendship. Nothing to complain about at the FICO Convention Center in Bologna, which because of the large influx of people made the spacious halls available, but the story of the place remains essential in the narrative of the event.

Indeed, it is extraordinary to be able to give vent to expressive freedom in such an evocative location as Fabriano’s Piazza del Comune or to sit in the wonderful Oratorio della Carità. Here, the representative of the Marche Region, Chiara Biondi, in the company of the tireless creator and organizer of the event, Anna Massinissa with Gabriele Mazzara and Laurin McCracken, emphasized the extraordinary contribution that FabrianoInAcquarello has made to the city of Fabriano. Also in the same room, which is completely frescoed, and where part of the demo sessions were held until two years ago, the winners of FabrianoInAcquarello’s important award recognization were announced, which rewards not only the artist’s personal commitment, but also their ability to have amplified the reach of watercolor painting.

In the Junior category was awarded the Greek Johnny Patramanis, who was visibly touched by the recognition he received. In the Senior category, however, was awarded the outstanding Teresa Jorda, a Catalan watercolorist and the first artist to exhibit a watercolor work at the Academy of Fine Arts, which since 1979 has been part of the University of Barcelona, the only center in Catalonia that obtains a degree in fine arts. Jorda’s technical knowledge, together with the concept of creation conveyed by critical reflection of reality, make this artist among the most important in the international watercolor scene.

Teresa Jorda was also the star of the afternoon session in which she created a watercolor work with a strong visual impact. The work, created on a Fabriano “author’s notebook,” has a story to tell. The artist had seen it in the exhibit hall and wanted to buy it but since it was no longer available, it was given to her by the Fabriano representative. Jorda then thought of reciprocating the appreciated kindness by painting it and offering it as a gift to the Fabriano Watercolor Museum, which currently has nine hundred and fifty artist’s works.

The author’s notebook, which was initially two meters long, was sewn onto itself by the artist, who is known for her works charged with experimentation in which the process of deconstruction is followed by that of reworking. Jorda performed the entire demonstration with its highly symbolic value in strict silence in order to allow participants to grasp the entire essence of the process. After painting it with the pure pigments of cadmium yellow and Prussian blue, he made the architectural structure of the work by slashing along the entire length of the sheet-randomly- the surface, the cut ends of which she emphasized. Still using pure pigment, she spread Pink Rose color mixed with Perylene Maroon -rapresenting blood- with which she covered the jagged edges of the gash with her fingers. On some surfaces of the author’s notebook she applied graphite powder -the marks that life inevitably leaves in the individual- and helping herself with a needle and thick thread she stitched each page of the book -as if they were scars- scratching the surface of the paper with the cutter -the barbed wire. She also worked out the other side of the sheet in which the previous color had stained the pages. Finally she inserted threads of green silk -the hope- inside the gash. The result was a magnificent tribute to the Ukrainian people, prisoners of a senseless war and ripped with pain, with the hope of peace and a better future.

It was the American Marina Goldberg who closed the demonstration session by making a portrait of a little girl with an unusual, almost angry look. An expression that greatly complicated Goldberg, who consequently decided to represent her for the session, working wet on wet with broad color fields made vibrant by the use of the handmade goat brushes proposed by Michael Soloyev, available in different sizes -with 3-5-7-9 points- and following which she refined the details of the face.

The convention ended with a toast and farewell to the participants some of whom will continue with the “Painting Holiday”: a three-day event during which the participants will visit some of the most fascinating places in Marche and Umbria. There they will carry out live watercolor painting sessions and have the opportunity to visit some important eno-gastronomic realities of the Italian territory.

In addition, please note that from Sept. 30 to Oct. 3, there is the opportunity to participate in SperlongaInAcquarello -which is part of the network of InAcquarello Cities: the continuum of a journey into the world of art and painting under the banner of emotion and inclusion, perpetrated through the distinctive features of FabrianoInAcquarello for which art is: “the universal heritage of humanity,” to be shared and experienced.

(on the title, FabrianoInAcquarello, 2022 in Piazza del Comune, Fabriano, IT)