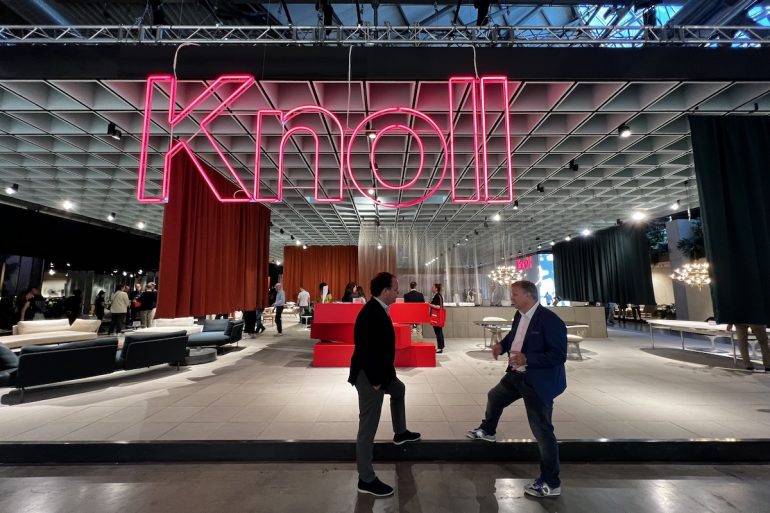 “The Salone is Milan. And always will be. Few events are able to celebrate ‘know how’ and ‘know how to do well’ as the Salone del Mobile does,” the city’s mayor, Giuseppe Sala, said in a press release.

The Salone del Mobile.Milano, was established in 1961 under the direction of Cosmit -Committee Organizer of the Salone del Mobile- with the aim of promoting Italian excellence in the design sector and Italian exports of the furniture industry and its complements.  The construction in 2005 of the current Fiera Milano in Rho, designed by archistar Massimiliano Fuksas and consisting of eight pavilions that provide a total of 345,000 gross covered exhibition square meters (sixty thousand outdoors), has subsequently consecrated this international fair to the world market.

The rest is history.

Reduced by the two-year pandemic that has gripped the entire world, the 60th Salone del Mobile.Milano, was publicized by six posters created by Emiliano Ponzi, tracing its history over time and addressing the public with the theme: “Designing Sustainability, Celebrating Beauty.”

A theme that aims to disseminate guidelines that can help producers and exhibitors operate in tune with sustainability criteria-which include the use of wood and upcycling materials with low environmental impact-and the creation of spaces of well-being, shelter and inclusion that have become necessary with the pandemic.

“We are experimenting with new ways of working, traveling, living. An everyday life to be rebuilt that challenges us and pushes us to reinvent ourselves. A whole sector that is already working to provide answers on how the spaces we live in must adapt to change. This Salone is finally an opportunity to share them,” said Maria Porro, President of Salone del Mobile.Milano, to such intentions.

The 60th edition of the Salone del Mobile.Milano focuses on the sustainability of the product, starting with the primary materials used in its creation, which also involve the more than 600 young talents of the SaloneSatellite: the springboard from which, since 1998, the future faces of design have been emerging and which this year saw the promising young designers engaged on the theme of: ” Designing for Our Future Selves. Sustaineability”.

This year’s edition highlighted not only the narrative value of objects, but also their ability to create an atmosphere, arouse emotions and allow the space to resonate with the people who live there. As always, the range of proposals is very wide and satisfies all tastes: from “less is more”-famous quote by Ludwig Mies van der Rohe-to the extrabold. All without ever betraying comfort, efficiency and functionality. The palettes are also varied, although the seduction of natural, soft nuances is notable. Materials respect the environment, whether reclaimed, rare or sophisticated woods, recycled plastics or new compounds. The finishes are precious and precise, the fabrics enveloping and endowed with extreme tactility. Furniture 2022 wants to be caressed, with the eye, but especially with the hand. And, as never before, they invite true, real, non-decorative use.

Accompanying the 2022 edition of Salone del Mobile.Milano were the biennial editions of EuroCucina-and its side event FTK (Technology For the Kitchen)-and Salone Internazionale del Bagno.

If the pandemic has accelerated the evolution of design and furnishing, making the space we have more comfortable, convivial and functional -interior and exterior, small or large- the kitchen has once again become the star area of the home with an open environment that invites meeting and sharing. The island is the predominant element around which design becomes hybrid and multifunctional, in response to contemporary living in variable spaces. Fluid elements such as domestic greenhouses, or modules -walls or centerpieces- break into the kitchen, integrating and defining areas. The bathroom, at the same time has divested the function of “service space” in favor of a more relaxed and hyper-designed dimension in which sanitary ware becomes the protagonist with almost sculptural structures and relaxation areas become food courts for the body.

In the spaces used for the kitchen and bathroom

The newly formed S.Project -now in its second edition- is the exhibition dedicated to design products and decorative and technical solutions that highlights the most significant lines of contemporary research with a heterogeneity of products ranging from indoor to outdoor furniture without any problems of continuity. Outdoor environments break down the boundaries between in and out and influence indoor production with their shapes, colors and materials.

In the spaces of S.Project, the project -no brand-“Design with Nature “by architect Mario Cucinella aimed at environmental sustainability came to life. The installation aimed to offer food for thought regarding the current role played by architects and designers in relation to the important new connotations of living in balance between territory, city and landscape.

At the Salone del Mobile.Milano, there was no shortage, in addition to the commercial offerings, of moments of sharing and reflection in the “Talk” spaces, which this year featured Mario Cucinella, Daan Roosegaarde, Victoria Siddall, Eva Feldkamp, Liam Young, Anab Jain, Marjan van Aubel and Makkox among the protagonists. In the four Food Courts, on the other hand, the superfine palates were satisfied by the culinary proposals of Identità Golose -International Gastronomy Hub-, which developed dishes to interpret the future of cuisine and taste under the banner of sustainability. Among the featured chefs were Carlo Cracco, Cristina Bowerman, Andrea Ribaldone and Edoardo Traverso, Giovanni Ricciardella, Davide Oldani and Iginio Massari, Viviana Varese, Eugenio Boer and Federico Sgorbini.

Salone del mobile.Milano, is back in its fullest form: reaffirming the value of meeting, discussion and dialogue, creating an immersive and emotional visiting experience that historically distinguishes Salone del Mobile.Milano, making it unique in the international exhibition scene.

(on the title, the Knoll booth at Salone del Mobile.Milano)