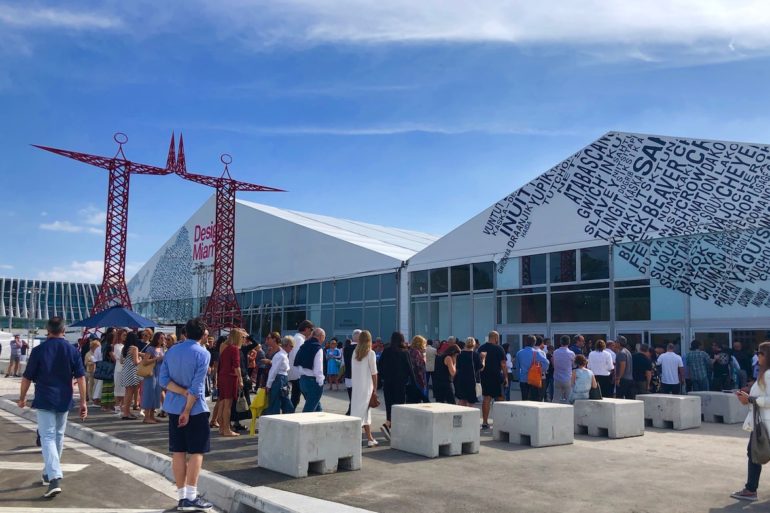 Design Miami has become the main venue for collecting, exhibiting and discussing high-quality design works in a mixture of functionality and aesthetics that makes Design Miami an obligatory destination for lovers of the latest model style or the evolution of objects over time, furnishings which are absolutely timeless or revised in a modern key or even for objects of great craftsmanship. The exhibition, which took place for the first time 14 years ago in The Moore Building, has taken as gone a low way and has taken shape over time in the area directly adjacent to Art Basel in Miami Beach, covering an area of ​​6500 square meters (70,000 square foot), with more than 33 galleries on display from 20 countries in the world. 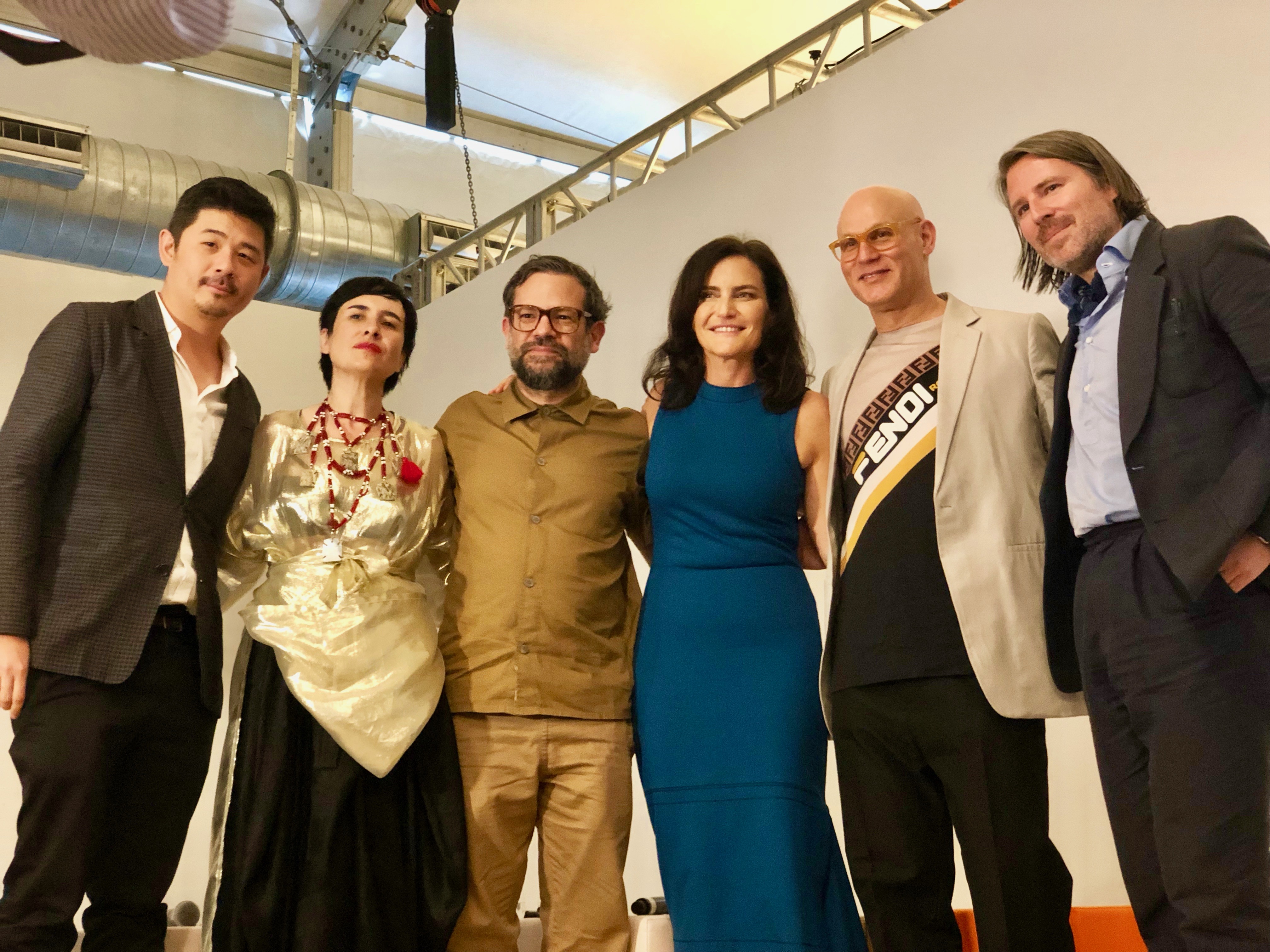 The exhibition started in the mind of the founder of the Design District, Craig Robins with DACRA, the company that combines architecture, art, design and fashion. Craig Robins, founder, director of Design Miami and managing director Jennifer Roberts opened the press conference attended by Rodmarck Primack, British designer Bethan Laura Wood, Pedro Reyes and Karla Fernandez winners of the 2018 Visionary Awards. Among his various thanks, Craig Robins presented the site-specific outside the fair: Constructed by the two Visionary Award winners Pedro Reyes and Carla Fernández, the installation consists of two large anthropomorphic pillars in red painted steel entitled Unite with clear reference the issue of immigration and the detachment of children from their parents to the border with Mexico, a symbol of solidarity in a period of political and geographical divisions. In addition to the installations, a container with a capsule-collection of t-shirts, bags and clothes supported by Levi’s, whose proceeds will go totally to the separated families at the border through the American organization Immigrant Families Together, to help the indigenous peoples of Mexico, with the clear concept that art, as an explicit representation of society, must not be unaware of the world in which it exists. Mr. Robins, speaking of the various stands at the 14th year of the exhibition, also mentioned the Talks with great characters: among the various talkers there were indeed Antonio Citterio, Chad Oppenheim, Renee Gonzalez, architect par excellence of the Art Deco area of Miami Beach. Renee Gonzalez has also opened the third auction of the RED series, with Theaster Gates and Sir David Adjaye, icons in the world of art and architecture, which have devolved their works together with those of the Stuart Parr collection, Marc Newson , Pierre Jeanneret, Zaha Hadid and others in support of the fight against AIDS. The works, presented by Gagosian in the historic Moore Building, were auctioned by Sotheby’s on December 5th.

Entering the heart of Design Miami for 5 years now, in addition to the core business of the fair is Curio, which is an exhibition platform of Design Miami, which invites designers, curators, innovators and gallery owners to present curiosities and innovations in the design with emphasis on surprising installations of scientific and technological research alongside crafts and creative production for a total of 12 Curio stands interspersed with the Design Miami core gallery, which represent the exhibition program of the fair with inventions of the panorama of today’s design.

Calico Wallpaper had a great importance to Curio, founded in Brooklyn in 2013 by the spouses Nick and Rachel Cope who, in collaboration with London designer Philippe Malouin, presented their first project. Entitled The Color and the Shape, the Calico installation re-elaborated by Philippe Malouin, a designer with a very interesting curriculum vitae and nominated Designer of the Year, reinvented with the spouses, the potentials of wallpaper through an engaging system of abstraction, textures and a modular layering game inspired by Henry Matisse’s papier decoupés. The materials are eclectic and structured: from Tyvek (a synthetic material similar to the paper patented by DuPont) to the mesh paper that are dropped, literally, on a colored background, allowing an infinite number of arrangements, always unique. Calico wallpaper was born with the idea of ​​creating murals using large-scale collages to experiment with new wallpaper capable of rendering an anonymous space in a totally new, fresh and re-combinable space. There were many stands set up by Calico in this edition of Design Miami that was able to make surprising the various spaces without obscuring the exhibits. 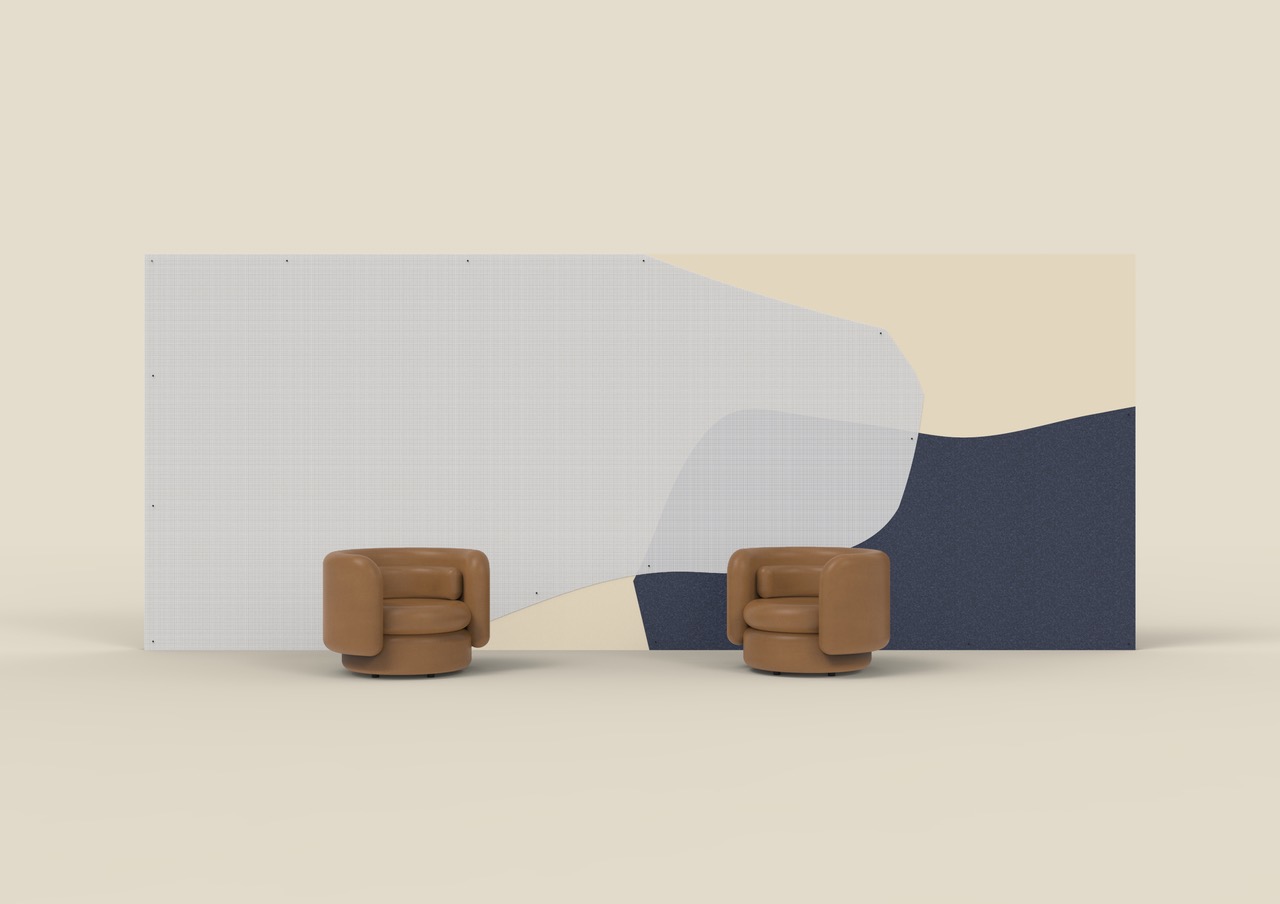 The Calico process combines artisanal methods with decorative arts, such as traditional marbling and dip-dying techniques, with innovative digital technologies. Calico Wallpaper collaborates with important designers and architects. In addition to residential projects, Calico Wallpaper designs have been exhibited internationally at the London Design Festival (2015 and 2017), at the Milan Furniture Fair (2015 and 2017), and have won a place in the permanent collection at Cooper Hewitt Smithsonian Design Museum. 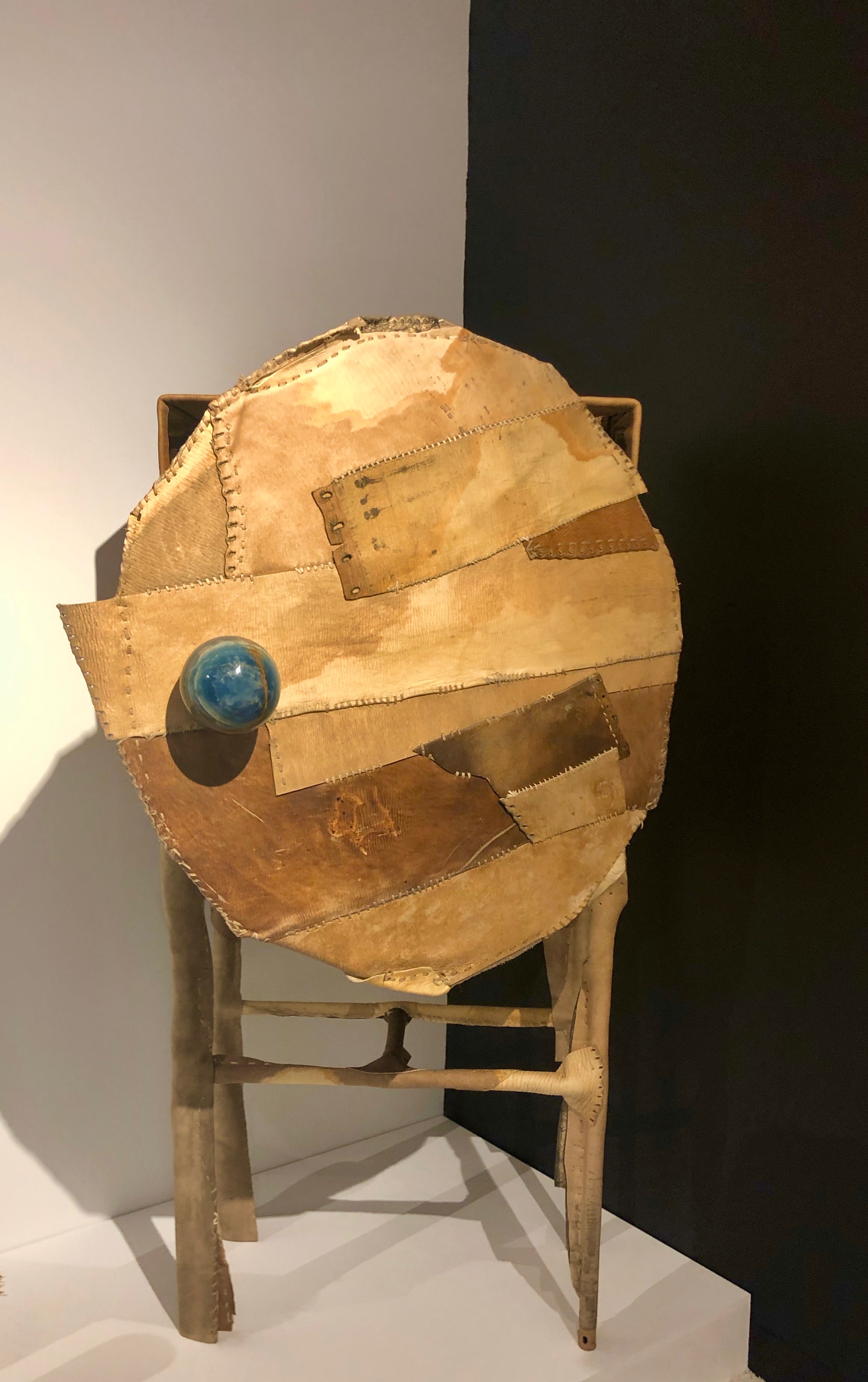 Equally interesting is the collection of Entrevero furniture by Argentinean designer and artist Cristián Mohaded, which seeks to cultivate a new means of expression capable of overcoming the boundaries between design and art with the Argentinian craftsmanship transformation and manipulation of the materials used. The J. Lohmann Gallery, founded in 2006, presents Breaking the Mold: Contemporary Korean Ceramics presenting five of South Korea’s most talented emerging designers working with clay: Sangwoo Kim, Ahryun Lee, Nin Lee, Jongjin Park and Bae Sejin who have studied and worked internationally, exploring the creative possibilities offered between East and West by offering an innovative approach to contemporary ceramic design. The inimitable ornamental language of each designer, the use of experimental techniques and the unique interpretation of clay create a perfect symphony between craftsmanship, design and art that is anything but ordinary. 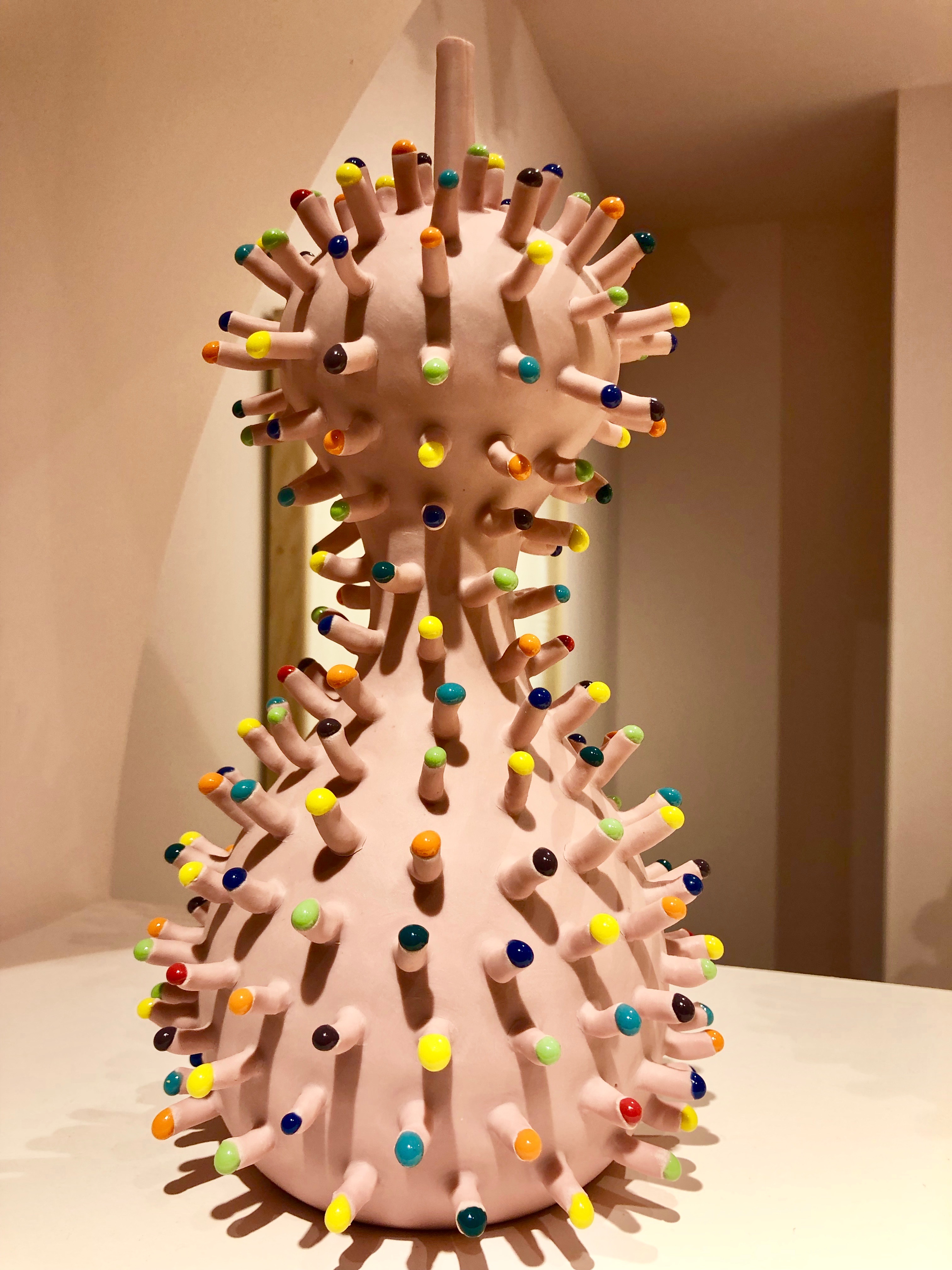 The core of Design Miami has seen the 10 years of participation in the Design Miami of Fendi that this year has attended with the exhibition “Shapes of Water” curated by Sabine Marcelis who has made ten fountains, inspired by 10 icons of the Maison and of its logo, combining water with travertine marble: the same material used to build the emblematic Palazzo della Civiltà in Rome in 1942, which became the home of the Maison in 2015. The stand opened with a resin bag inspired by Peekaboo, iconic Fendi bag, in the foreground: beautiful, unique. The fountains recalled in some ways the glass and mirror boxes by Larry Bell, currently exhibited at ICA. 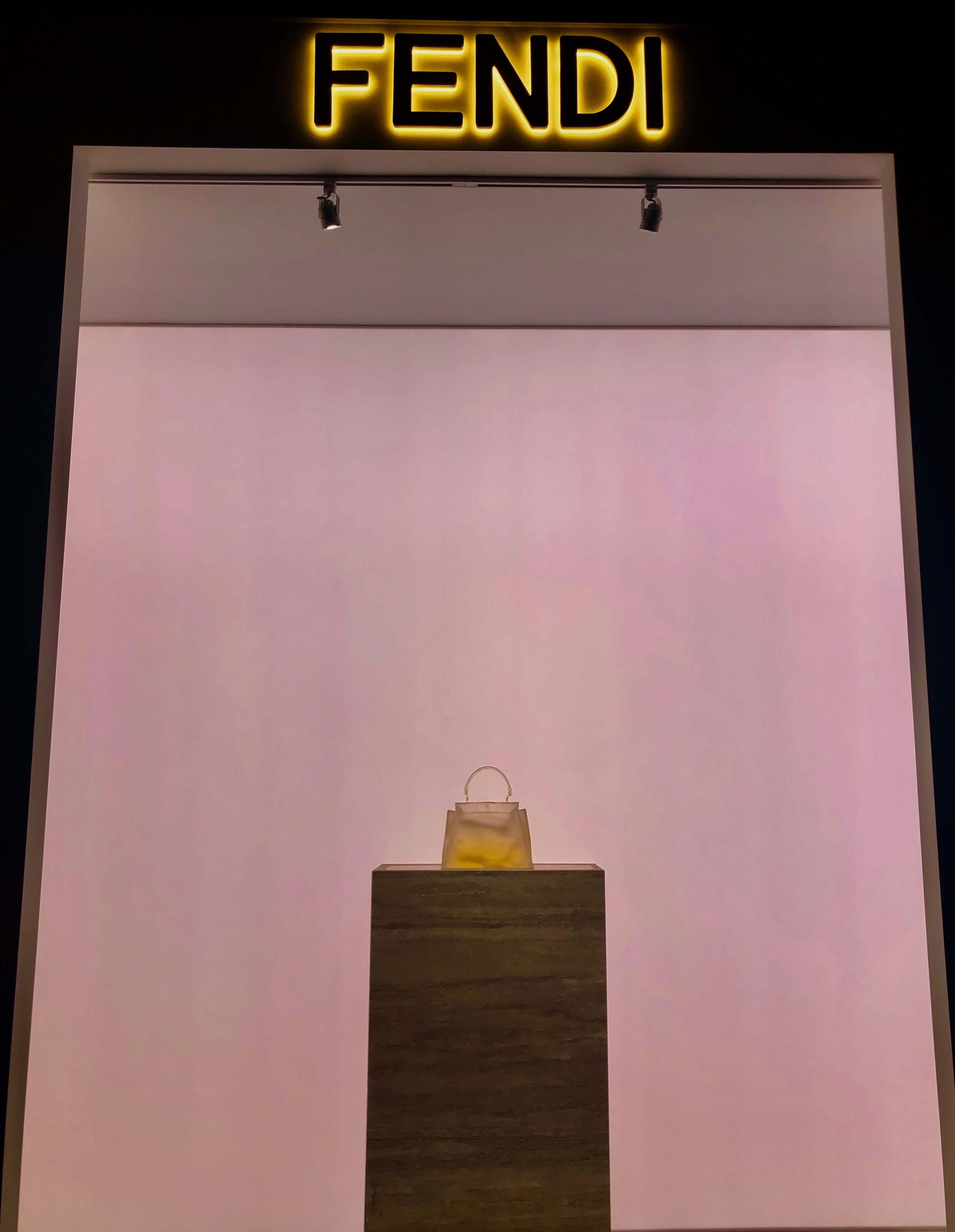 Among the exhibited works, the Salon 94 Design in New York presented the 54 Arm Lamp by Gaetano Pesce, one of his most representative works, which allows the user to model each arm according to their desire, demonstrating the imaginative humor of the designer. 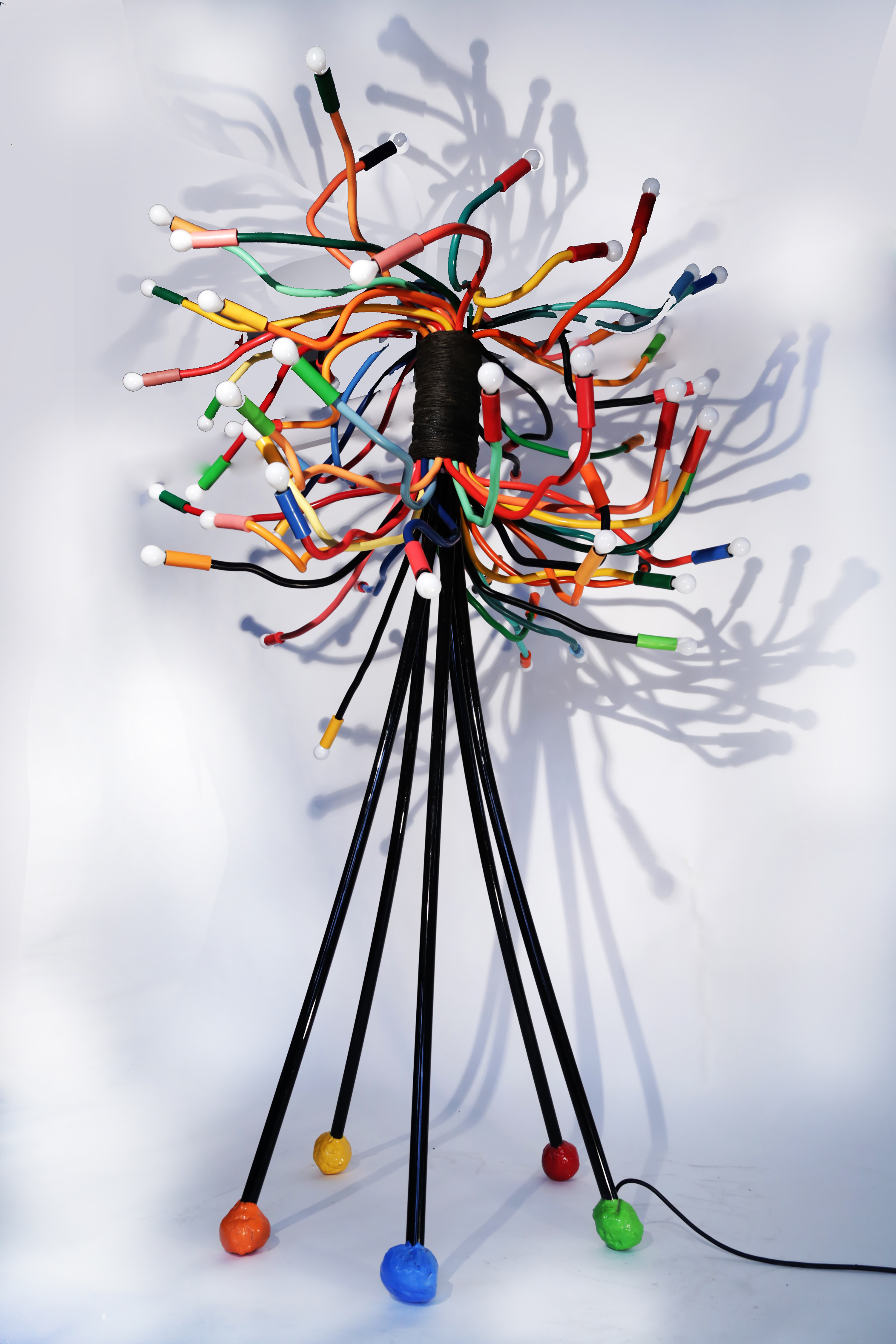 Unicorn Rocker by Daniel Jackson, at the Moderne Gallery, is the wooden rocking unicorn made in 1974. Commissioned as a Christmas present to the fashion designer Wayne Rogers, it is now considered his most important work, besides the Pierre Cocteau ceramics recently purchased from a gallery in Monaco and the stone bathtub weighing 2.268 kg (5000 pounds) of marble used to build the bathtub of the Haas Brothers, born of the creative mind of the Haas Brothers, currently on display with the Objet The Haas Brothers at The Bass Museum.

The pioneering voice in the global minimalism of Harry Nuriev, founder of Crosby Studios, has instead proposed a sculptural installation of furniture entitled The Office, drawing satirical and sentimental inspiration from his past professional life as a humble employee in a small Russian design office: taken objects of daily life – a chair, wallpaper, desk, hanger and printer – and subverted the formal expectations of the public through the Balenciaga brand that gave rise to a subversion of the canonical and static standards of the time transforming one of the Russian trades par excellence (meticulous workmanship with carvings and embroidery of wood) to promote a rebirth of local craftsmanship in a modern way. Peter Blake Gallery presented historical drawings created by Kem Weber for the Walt Disney Studio animation offices in Burbank, California, including the rare and iconic Airline armchair. The Galerie Patrick Seguin presented a removable 6 x 6 Jean Prouvé house completely built in 1944. Originally designed to rearrange the victims of the Second World War, this house is equipped as a fitness room equipped for a variety of activities, which makes it a the architecture of Prouvé completely adaptable to the present day. It took 3 people to install the house in 24 hours. 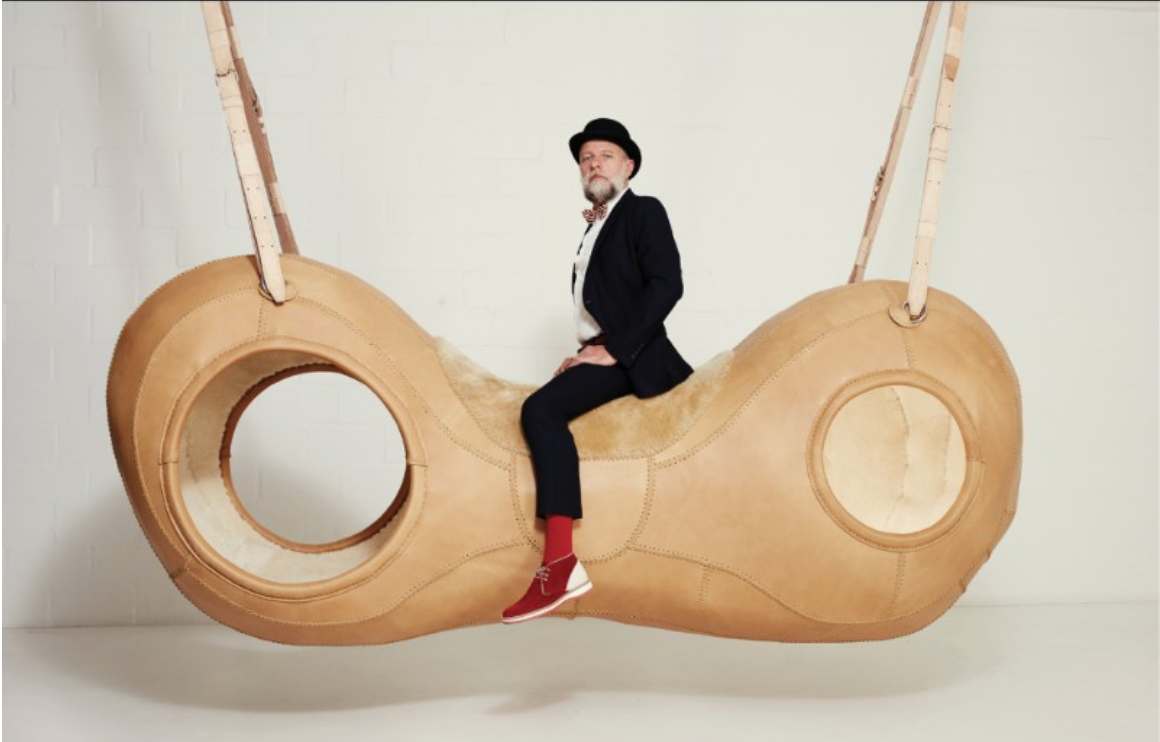 Among the most interesting pieces of Design Miami, there was unquestionably the vernacular architecture of Porky Hefer, unfortunately not put much in evidence because of the excess of pieces in the stand, the excellent Objets Nomades proposed by Louis Vuitton and previewed at the Design District boutique, the iconic Luminor Panerai 1950 and the new Luminor Due, 40% thinner than the classic model on display at the Officine Panerai stand inspired by the flagship boutique created in collaboration with the famous architect Patricia Urquiola. In this regard, the section dedicated to collaborations was very important not only with Fendi, Louis Vuitton and Panerai but also with Lexus, Scad, Therme Group who took care of setting up the space for the press conference and 14 talks with over 50 guests during the show , Grand Seiko, Stephen Webster, Creative Edge parties and USM who presented installations and works created specifically for the event, Perrier Jouët and his splendid decorated flute presented HyperNature by Bethan Laura Wood in the Collectors Lounge, an installation that drew a parallel between the transformative nature of Art Nouveau and the meticulous work required to transform grapes into Champagne. 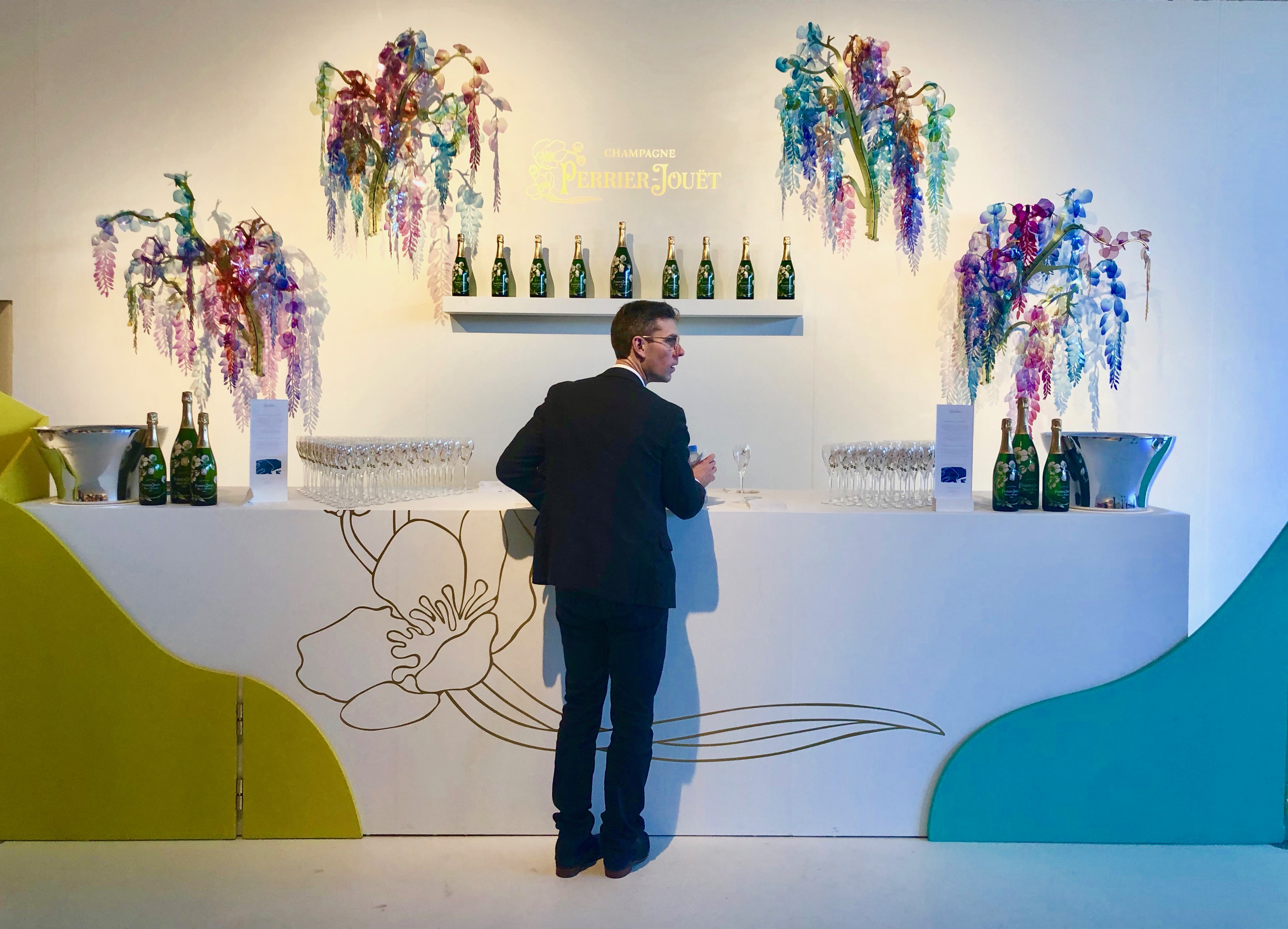 Miami Design 2018 was defined by Rosanne Somerson, president of the Rhode Island School of Design (RISD): “the strongest showcase since its inception”. It is no coincidence that during the fair were sold masterpieces of historical importance related to the design of the twentieth century, including a unique Jean Royère sofa and sold by Galerie Patrick Seguin to an important international collector-patron of unknown value and five other works by Royère and Pierre Jeanneret. The VIVID Gallery of Rotterdam sold four Wouter Dam ceramics to New York collector Lee Mindel and a Steltman chair by Gerrit Rietveld. The hand-painted plates by Jean Cocteau almost all sold out during the first days of the fair at the Lebreton stand with prices ranging between $ 14,000 and $ 34,000. A large Beth Cavener pottery was sold by the Jason Jacques Gallery to a private buyer for $ 250,000, while a large brass sculpture by Harry Bertoia was sold in CONVERSO for $ 425,000 together with a Warren Platner sectional sofa worth $ 140,000. , intended for an upcoming project by architect David Chipperfield. The contemporary market was equally lively: the six Girl Army lamps by Katie Stout of R & Company were sold in the first 40 minutes of the fair for the sum of $ 55,000 each. Strong sales were also reported at the Functional Art Gallery in Berlin, at the Future Perfect in New York, San Francisco and Los Angeles, and at the Southern Guild in Cape Town. The new works by Porky Hefer continue unperturbed to delight collectors.