Design for Good: Posterfest 2019, the poster as a means of HIV / AIDS education. 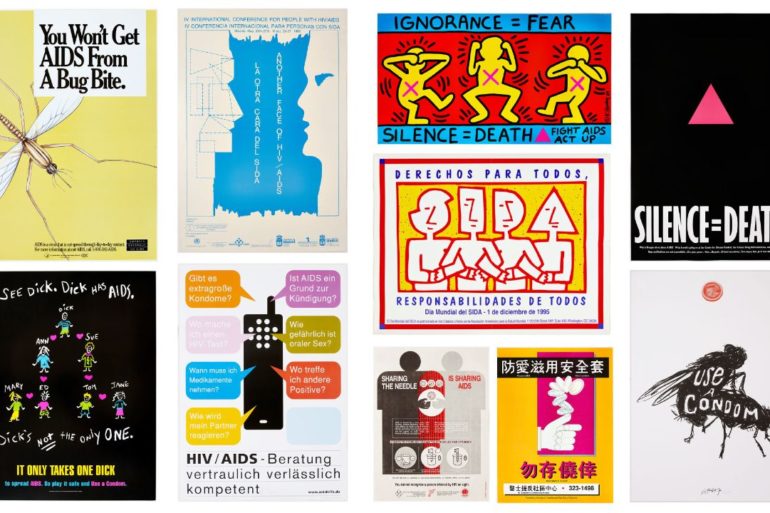 On April 27th, on the occasion of World Graphic Design Day, The Wolfsonian-FIU museum of Miami Beach in collaboration with the AIGA and the Florida Department of Health of the Miami-Dade county, organized Posterfest: Design for Good 2019.

Design for Good is an initiative launched in 2018 that puts the spotlight on problems that are most dear to the city of Miami and more generally to South Florida: in 2018 the theme was homelessness, this year the lights are on a health problem that statistically considers South Florida as one of the areas most at risk with regards to HIV / AIDS virus infection.

HIV is the acronym of Human Immunodeficiency Virus which normally results in AIDS, an acronym for Acquired Immune Deficiency Syndrome, a disease that involves a progressive and drastic lowering of the immune defenses with consequent difficulty and impossibility to counter the onset of infections caused by opportunistic diseases such as common viruses, bacteria or fungi. Unlike other viruses, the human body is unable to eliminate the HIV virus, which means that once the infection has occurred, the body will keep the virus within it for life. However, the infected person can live for years without any symptoms: for this reason it is essential to undergo a blood test to check if there are anti-HIV antibodies and possibly to start the possible treatments, available today: the PrEP (to be taken daily to avoid the HIV infection) and PEP (emergency medication to be started within 72 hours of infection). The contagion occurs in the 72 hours following direct contact and it is not the drinking from the same bottle or being bitten by a mosquito the sources of contagion: these are the preconceptions related to ignorance. Sharing an infected needle, having vaginal, anal and oral sex or using infected sex toys creates contagion. An infected mother can transmit the virus to the baby during pregnancy, childbirth or breastfeeding. In this regard, the current data are alarming: on a statistical report based on data received from the Miami-Dade County, it appears that out of the 36,900,000 sick people in the world, 1,122,900 are in the USA of these 106,585 in Florida and 26,632 in the county of Miami-Dade.

The aim of the initiative is therefore to provide information by destigmatizing the problem of HIV / AIDS, most often a cause of social marginalization and oblivion due to the ignorance of the disease, with a very versatile, economical and powerful mean: the poster.

The synergy between the Wolfsonian-FIU and AIGA (American Institute of Graphic Arts, founded in 1914) starts from the fact that the museum boasts one of the largest collections of posters on HIV / AIDS in the world (about 4000 pieces composed between 1985 and 2010 and from 80 states), donated in 2012 by Henry S. Hacker and family, while AIGA is the largest community of professionals, enthusiasts and patrons that amplify the voice of design at a social level, accelerating the change in a positive way. AIGA works around three simple Ideate-Prototype-Execute concepts, namely: devising, prototyping (a bad analogy that does not appear on either Italian or English dictionaries but which simply means looking at the world with new eyes, leaving behind convictions , mental models, habits and prejudices, to get in touch with the deepest part of the self (and of the Universe) from which we emerge with a sort of new self that involves new ideas and new approaches to thought and action) and to achieve.

Inspired by some vintage pieces selected from the collection, including Use a Condom, from 1997 by James Victoire, and Ignorance = Fear, Silence = Death, 1989 by Keith Haring, the students were invited to propose their posters with an incisive message that helps dispel disinformation, challenge stigma, encourage empathy and promote safe sex and responsible drug use. Ten winning students selected by a strict jury, who will have the chance to see their work advertised on condom containers distributed free in Miami Dade County. The winner’s competition were: Cindy Diaz, Hamzh Elmi, Victoria Roman, Tennille David Shuster, Ana Smith, Angelina Lang, Mikaela Francis, David Gurr, Nathalie Sandin, Marian Parajon-Downing.

The initiative involved influential figures able to make an examination about the disease and communicate incisive social messages through posters. But how can we help address a public health crisis through visual communication? The answer is given during the panel discussion in which Elizabeth Resnick, Professor Emeritus of Graphic Design at Massachusetts College of Art and Design in Boston, Dr. Weirei Wang, Associate Professor at the FIU Communication Department and Rashida Biggs, for the Department for Health Promotion and Prevention of Diseases at FIU. A historical disquisition that addresses the theme of the poster from the political-sociological point of view: Using the posters of the collection, Elisabeth Resnick makes a historical examination through which she maintains that it is necessary to differentiate the message in the different cultures, from country to country: they are an example of the more or less explicit posters such as those produced by Oliviero Toscani in Italy and that have made a lot of fanfare, rather than those produced for the population of Australia with symbolic references to Aboriginal graphics: “It is necessary to graduate the explicit explanation of the images that they are immediately perceptible ”, says Elisabeth Resnick to which she adds the fact that it is fundamental to enter the community, take part in it and do research to be able to focus on the message being conveyed in the most appropriate way possible. And to those who ask why Miami is the nerve center of this epidemic, Rashida Biggs replies: “In Miami people are beautiful and beauty is not associated with illness”. In addition to the poverty that does not allow access to drugs, it seems that the factor appears to be the key element: it is during parties, it is in the concept associated with Miami as a vacation without limits.

But in addition to the cultural aspects related to the disease and the meaning of the posters, the initiative has also provided practical workshops, with free entry aimed at the challenge of designing with empathy. Focusing on the theme of the poster as a means for social change, four different stations have been set up including two workstations in the shop, an old style with paper and colors and a new style with digital, thanks to the guys at Barry University, and two workstations made available to the IS Project: a traditional Letterpress that is a machine that uses a printing technique with text and images in relief and a modern Letterpress with photopolymer plate. Different methodologies of approach, a single purpose, to give the poster the functionality for which it was born: to convey messages that encourage social pro-positivity.

The event was sponsored by Southeastern Printing with the support of the FIU history department, Herbert Wertheim College of Medicine of the FIU, Unity Coalition | Coalición Unida and the Ambiente magazine.