Day one of the Fall Portrait Academy: excitement galore for the fall session of the Portrait Society of America. 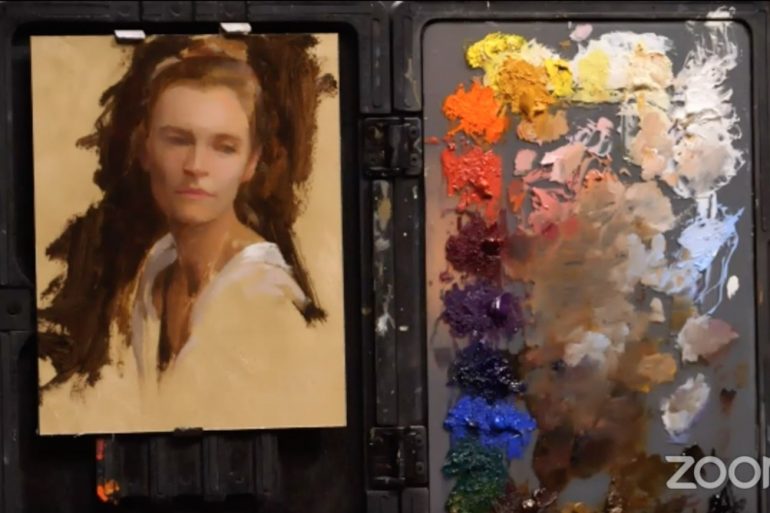 Kicking off in style is the first edition of the Fall Portrait Academy, the fall art symposium, organized by the Portrait Society of America and focused on portraiture and the figure.

The symposium begins with an event with a “WOW” factor: the presentation of art studies by some of the faculty members of the Portrait Society of America, including Casey Childs and Alicia Ponzio. In the rigorous organization of Casey Childs’ spaces, in the arrangement of his new studio, personally thought out, Alicia N. Ponzio presents her studio as:” a reflection of the mind” and therefore in continuous evolution, as declared by the artist who for the practical realization of her bronze sculptures goes to “The Crucible”, an industrial arts school in Oakland.

Mary Qian, on the other hand, had the privilege of stepping through the door of Chicago’s “Palette and Chisel” club, the iconic art studio that boasts many names, including Alphonse Mucha and the contemporary Richard Schmid.

Built after The Great Chicago Fire in 1875, the club is a testament to the fact that after 125 years of history, this place is now an artist’s treasure trove.

In conversation with Christine Egnosky -Executive Director of the Portrait Society of America- the artists dispensed advice to attendees regarding time to paint: ”Don’t wait for the perfect time!” as Casey Childs says; to the importance of creating an artistic community with which to interface and grow as Mary Qian puts it to the concept of making money in the world of artists: “Don’t let making money take over your creative energy”, as stated by Ponzio.

Michael Shane Neal, the gentleman artist and chairman of the Portarit Society of America, interviewed Ronald Sherr live from his second studio in Hong-Kong, (the main studio is in New York City). Known for his portraits that include famous figures from American political, administrative and academic circles, Ronald Sherr has counted among his subjects the Presidents of the United States of America George H.W.Bush and his son George W.Bush, whom he had the pleasure of portraying together at the Camp David residence. Reviewing some of Sherr’s most important works, the artist shared anecdotes, curiosities, and thought processes that revealed behind-the-scenes insights into the subjects painted: an interesting discussion that also incorporated technical issues such as the use of gold leaf – stretched to perfection by Sherr – or the use of graphite and gouache in the creation of a portrait.

Fundamental for Sherr, in the creation of his work, is to enter into a relationship with the subjects to be represented. “He is able to capture the feeling of each subject,” declares Shane Neal while Sherr states that the reason is to be found in the concept of the subjects involved in the creative process which, as the famous painter Pietro Annigoni claimed, are: the artist, the subject to be portrayed and the subject portrayed.

With this approach and knowledge of the subject, the work acquires a soul of its own that can communicate and involve the viewer.

It is through “Big Ideas” that one leaves one’s mark on the world, and Bo Bartlett, David Kassan and Mary White, with their projects made history in contemporary American figurative realism.

Bo Bartlett in his exhibit at the Columbus Museum of Art in Columbus, GA was inspired by Andrew Wyeth and Thomas Eakins. His modern paintings, are very powerful. Easily exploring the American soul through the beauty of everyday life Bartlett charges the scenes with an epic aura that can make his works timeless.

Sam Goldovsky, Edward Mosberg and Hanna Davidson Pankowsky, are just a few of the people featured in the “Facing Survival” exhibition that was on display at the Fisher Museum of Art in Los Angeles in 2019. David Kassan’s ambitious project took him around the world in a race against time that allowed him to collect the testimonies, memories, despair and hope of forty-two Holocaust survivors.

An emotional and touching project that starting from the personal experience of the artist (his grandfather was a victim of the Nazi fury) aims to fix in the collective memory one of the most dramatic episodes of history with the hope that in the future similar atrocities can no longer occur.

In “We The People” Mary Whyte has represented fifty war veterans,: one for each state of the U.S. A project that took many years of full-time work during which the artist has collected the stories, multiple and different, and the backgrounds of its protagonists. Mary Whyte is now involved with the “Patriot Art Foundation” (https://www.patriotartfoundation.org), a nonprofit organization that aims to use the visual arts to honor veterans who have served our country by celebrating their return to civilian life and to assist them in the reintegration process.

Due to an accident, Max Ginsburg, a long-time faculty member who was awarded the Gold Medal during this year’s Portrait Society of America convention, had to temporarily drop out of the scheduled demo. True to his principles and values, however, Mr. Ginsburg has promised to make up for the demonstration in three weeks’ time: the Portrait Society of America will record the event and send all participants the demonstration, at no extra charge.  Replacing him, however, was Louis Carr with a demonstration on shapes and colors. Starting with the premise that portraiture is one of the harder forms of art to execute, Carr led the audience in understanding his creative process of blocking in – the corner stone of drawing, as the artist defines it – and balancing tone and value. “Never ever be afraid to correct your drawing,” says the artist, who piously reiterates the importance of developing problem solving in finding solutions to the various problems that may arise during the course of the work.

The first day of the symposium ended with after hour talks by David Kassan, Alicia Ponzio and Mary Qian, who entertained the audience with an informal chat that summarized the day’s events, offering advice and sharing life experiences.


Jesse Lane, The Colored Pencil artist, will be am

Teresa Oaxaca will be among the teaching artists i

(…)“What drove me to become an artist is that

Steward White, will be among the teaching artists

Back this year, for the second year in a row, Real

"The Homes We Make" by Sara Gallagher. Graphite an

Quang Ho, will be among the teaching artists in th

EN-Just a few hours to sign up for Watercolor Live

Venezuelan artist Ramiro Sanchez, will be among th

Third and final day of Fall Portrait Academy, the