CitizenM, the concept hotel for modern travelers, is waiting for you in Miami. 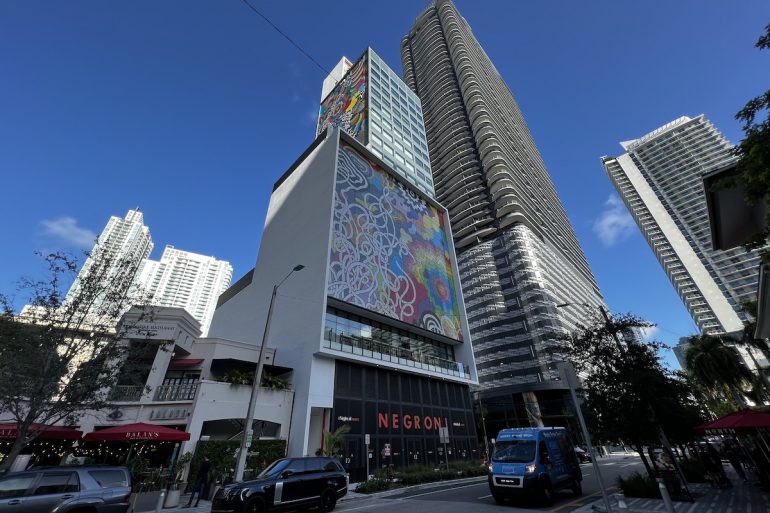 CitizenM, the hotel for dynamic travelers on a budget but who do not want to compromise on comfort, art and design, has opened its first location in Miami.

It did so in Downtown in the Brickell area: the wall street of the tropical city. 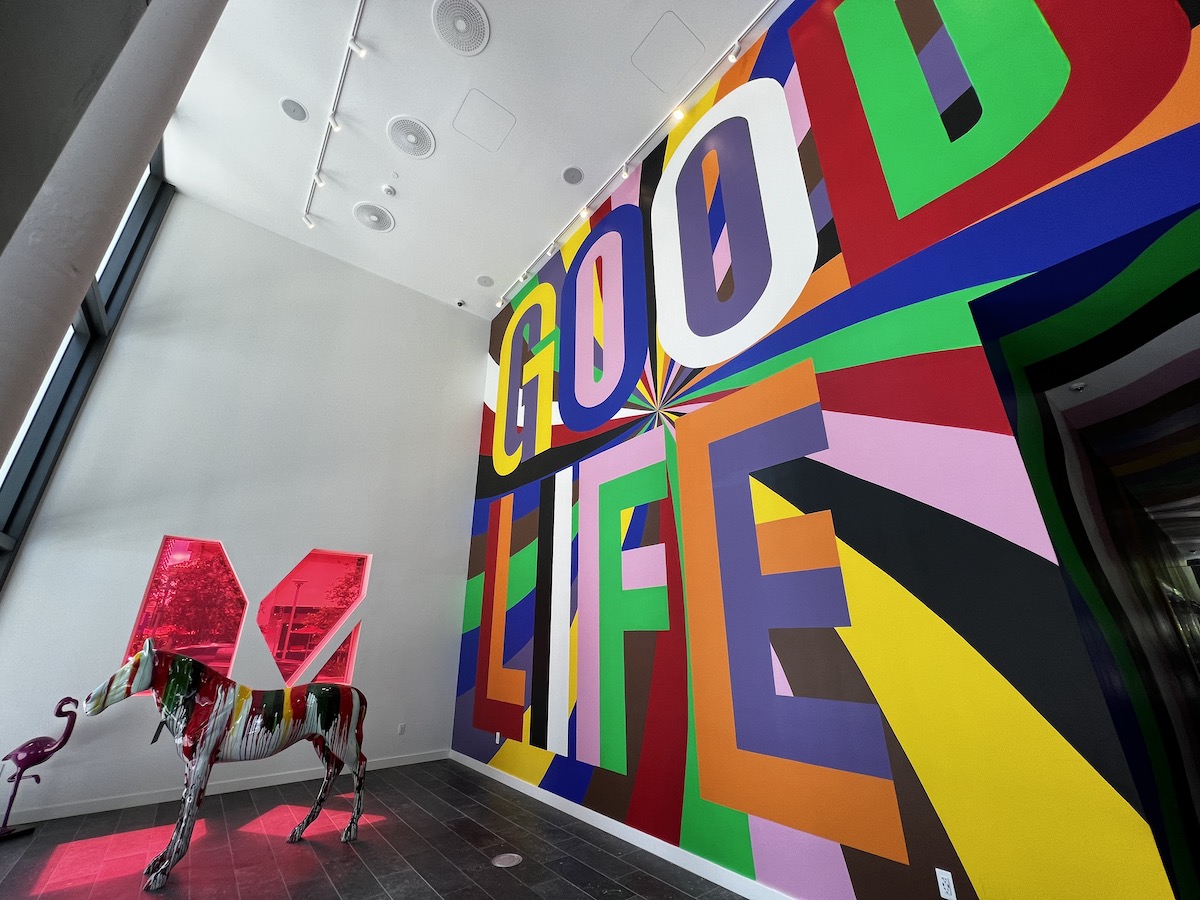 The welcoming mural created by Lakwena MaciverThe hotel, with its distinctive concept, is the brainchild of Rattan Chadha, an Indian-born, naturalized Dutch collector of modern and contemporary art. With a background as a textile entrepreneur Chadha, mindful of business trips with his employees who disliked staying in cheap hotels because they were sterile and uncomfortable, decided to sell his behemoth -Mexx- to create the citizenM chain.

The philosophy with which Rattan Chadha approached the creation of the hotels, assisted by the genius of Rob Wagemans, Dutch architect, founder and creative director of Concrete Architectural Associates, can be summed up in Chadha’s motto: “After all, Earth without “art” is just “eh.”

A philosophy that must have met the taste of the modern traveler perfectly so that after the opening of the first hotel in Amsterdam in 2008, many others followed: in Europe (London, Copenhagen, Rotterdam, Paris, Amsterdam, Glasgow, Zurich); in Asia (Taipei, Kuala Lampur); and in America (Boston, New York, Seattle, Washington DC, Los Angeles, San Francisco, Chicago).

Among an art collector’s favorite destinations could not fail to include Miami, the American art city, which in the last twenty years has been able to steal the show from New York and Los Angeles. Credit goes first and foremost to the dense network of artists who inhabit the city, a crossroads of the Americas, but also to the inauguration twenty years ago of Art Basel/Miami Beach: the winter twin of the summer fair that gathers the art world to itself every year in the Swiss town.

citizenM-Brickell is just the first of three hotels to open in Miami: by the end of November, the second citizenM will open near the Freedom Tower and the famous Heat headquarters while the third project will be completed in 2024 on Lincoln Road in Miami Beach.

With citizenM hotels Chadha has attuned personal artistic interests to the modernity and speed of the modern traveler, devising a concept of an affordable yet luxury hotel that takes 100 percent advantage of the functionality of the room. Room habitability in particular is a concept that vaguely harks back to considerations of space -made in unsuspected times- by futuristic Milanese architect Joe Colombo. A concept conceived as an environment in which to sleep, without sacrificing advanced technology -you can manage room and bathroom colors thanks to the citizenM-application, fine quality of linens and minimal design of the environment which relegates to the common spaces -colorful and convivial, technological but rich in cultural cues of art and books- the task of serving as a comfortable and dynamic space, domestic and even familiar. It is not unusual to see relaxed people in slippers sipping cocktails overlooking one of Downtown’s most dynamic streets or working on computers on the balcony overlooking the beautiful wild garden where silence and nature coexist in harmony.

If the hotel concept unites all citizenM hotels to characterize each individual hotel is art. In fact, for the realization of all citizenM hotels, the property issues a call for proposals in which dozens of artists participate: the ten selected are tasked with decorating the rooms, furnishings and walls and customizing the exterior façade to create a constructive dialogue between the place and the guest. In addition to winning prize money, artists have the opportunity to be known worldwide.

The citizenM-Brickell’s psychedelic ” Cosmic Collection” facade, clearly visible in the Miami skyline-despite the fact that the hotel is not among the highest in the city-was created by Jen Stark: an artist born and raised in Miami and now living in Los Angeles.

Instead, welcoming guests at the hotel’s entrance are the kaleidoscopic colors of Good Life: the mural created by Lakwena Maciver. Good Life also represents the city’s mantra and is meant to predispose the guest to savor Miami’s quality of life and the character of its inhabitants, already perceptible from the extreme kindness of the hotel staff: always available to help the guest with any eventuality, need or curiosity.

To the right of the entrance is the work Le Bouquet by Yann Leto, which depicts two boxers whose task is, as citizenM-Brickell manager Michael Stefanakis tells us, “to bring out a reflection regarding the four key elements of human nature: fear, respect, vice and defiance.”

On the second floor of the hotel, there is the self check-in station, which, thanks to the citizenM app, winner of numerous awards, is done by the guest in complete autonomy.

The hotel’s social life is also concentrated on the second floor (along with the rooftop with a swimming pool, which is currently being completed) thanks to the bar area, the snack bar, where every morning it is possible to have breakfast or enjoy a bite to eat during the day, and the large, cozy lounge. The guest, exiting the elevators to the second floor finds himself immersed in the work “Variations of her movements-exploding and exploring (forward-facing woamn and her companion;the scrotum flower” by Theresa Chromati: a hymn to the journey and its destination, which from initially unknown becomes a source of optimism and hope.

In addition to this work, the hotel’s second floor is a rich and varied puzzle of artworks including, among others, Alex da Corte’s Hot Potato Mess, Leigh Ruple’s Ambition Superstar by Marco Walker, Henry Gunderson’s It’s Hard to See from Where I Am Standing, and Atelier Van Lieshout’s AVL Skull-a design nook in which one can isolate oneself for a phone call or work that requires special concentration.

If for the artistic aspect Chadha turned to a variety of artists, who also customized the walls of each bedroom and the hallways-in which the carpets bear the city’s floor plan-for the furnishings he relied on the expert hands of Vitra, which welcomes guests starting with the lounge it houses, in addition to the artwork, books and Macs made available to guests, the iconic Eames Lounge Chairs cadenced to the colorful Eames Fiberglass by the phantom Eiffel Tower structure of the DAR (Dining Height Armchair Rod Base).

In such an environment it is hard not to feel at ease.

For guests who, on the other hand, need dedicated work spaces in which to have meetings and conferences in complete privacy, citizenM -Brickell, provides eight charming societyM meeting rooms of varying capacities that offer style, technology and unlimited -Nespresso- coffee to get ideas flowing during business meetings.

For those who would then like to take advantage of the tropical location to enjoy the sea and sunshine, it is not difficult to combine business with pleasure as citizenM-Brickell provides guests with a private beach on Miami Beach’s iconic Lincoln Road in the middle of the famous Art Deco district.

In addition, for each guest who stays two nights or more and waives the daily room cleaning fee, for each night the hotel donates 3 euros to the citizenMovement charity, which focuses on shortening distances between people by offering the gift of mobility to the most disadvantaged populations through the donation of bicycles.

You just have to stop by Miami to be enveloped in the atmosphere of citizenM-Brickell by appropriating the “good vibes” of the city and enjoying art in the luxury of an accessible hotel.