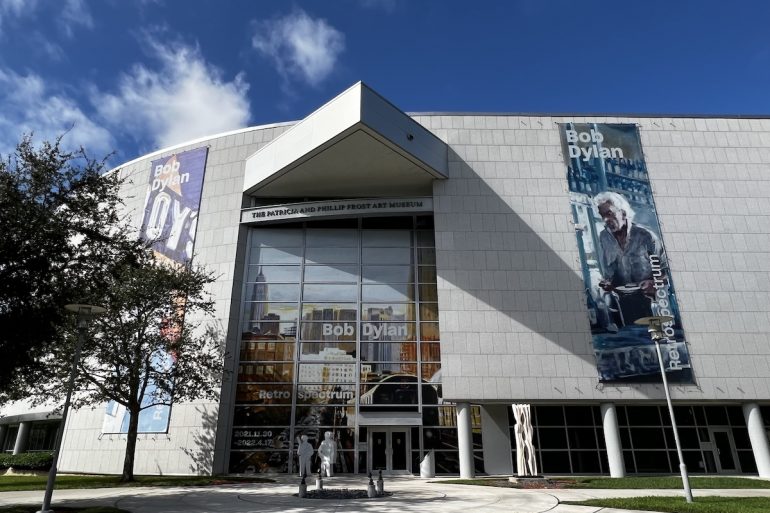 The Patricia and Phillips Frost Art Museum in Miami, on the occasion of Miami Art Week, has put together a major retrospective on Bob Dylan whose artistic greatness, according to scholars, will be the subject of study for years to come.

The exhibition brings together several of the artist’s series from both his personal collection and private collections and displays 180 works -40 of which are of recent production- composed of watercolors, acrylics, pencil drawings and iron works.

Given the artist’s shy nature, it is unknown whether Bob Dylan, currently on tour promoting his latest album, “Rough and Rowdy Ways,” will visit the exhibition.

Recent interest in this retrospective by several institutions also portends a tour of his around the world.

Bob Dylan is the musical and cultural icon who has inspired entire generations for over 60 years, with legendary songs such as “Like a Rolling Stone” or “Tangled Up in Blue.” In addition to music, the artist boasts a prolific body of autographed artwork.

Awarded the Nobel Prize for Literature in 2016 because of his extraordinary ability to have created new poetic expressions within the great American song tradition, Bob Dylan, in the realization of his works, has drawn inspiration from multiple sources: political and social injustice, poetry and literature, metaphysics and art. Multiple inspirational sources coexist in his songs: from the songs of southern cotton plantations to the plays of Irish exiles; from epic Greek tales to cowboy movies, from Elvis Presley to Frank Sinatra.

Art in particular has been a faithful companion that has accompanied him throughout his long musical career through drawing, painting, and sculpture.

A passion that matured even as a boy, when in the early “60s he left the iron county where he was born and raised – Minnesota – to move to Greenwich Village in New York where he was catapulted into a melting pot of jazz, folk and blues musicians, poets and comedians.  After only nine months in the Big Apple, Bob Dylan sold out the legendary Carnegie Hall in 1963, where ecstatic audiences were able to appreciate the energy, humor and greatness of this talented artist.

The retrospective is curated by Shai Baitel with the approval of Jordana Pomeroy, Director of the Patricia & Phillip Frost Art Museum.

Baitel is the Artistic Director of the exhibition, which produced the show initially for the Modern Art Museum Shanghai, the All Today Art Museum in Beijing and at the Jupiter Museum of Art in Shenzhen. Something similar had been done by the Halcyon Gallery and the National Portrait Gallery in London.

If from the musical point of view, many details of his career are known, the same cannot be said about his artistic career, which is why you are warmly invited to explore the exhibition and the unseen side of Bob Dylan.

The exhibition opens with the triptych, “Elevated Train” which pays tribute to the city that welcomed him and shaped him and to which he has dedicated many of his songs, New York.

The work in acrylic on canvas consists of three large panels with which, according to the American author Bill Flanagan: “He has made millions see what he sees”.

Among the “first works” performed are the “Writing and Drawings”, the illustrations of his songs, performed between 1961 and 1972, which the artist resumes in 2018 with the series “Mondo Scripto” in which, to the illustrations of his songs are added, written in cursive, the most famous lyrics in a sort of continuum that emphasizes the relationship between words and images. Mondo Scripto demonstrates the close relationship that exists between the artist and the songwriter, the direct engagement between his visual art and his songwriter.

“The Drawn Blank Series” is the series of sketches made between 1989 and 1992, in which the artist adds color by highlighting a series of objects and frames familiar to him from life on the road that the tours offered him: portraits, landscapes, quiet corners. “I was just drawing whatever I felt like drawing, whenever I felt like doing it. The idea was always to do it without affectation or self-reference, to provide some kind of panoramic view o the world as I was seeing it at the time,” stated the artist.

Since the early 60s, the artist has traveled extensively, sometimes participating in over 100 exhibitions throughout the year and this factor has indelibly affected his production. Thus appear, among the subjects represented, highways, city streets, dark corners, quiet corners and natural monuments that he saw during his travels. And equally, like a traveler who returns to his city of origin, observing how the places never remain the same, he reworks his works in series making variations over time.

In the “Beaten Path” series he executes a masterful portrait of what is the American landscape. seen through the beauty of motels, diners, old abandoned cars or the tenements lit by streetlamp. Often puntuacting these scenes is the road a theme central to Dylan’s creative output and embedded in the art, literature and music of America.

“The New Orleans series” is among the artist’s favorite series. First of all because New Orleans is the motherland of jazz, then because it passes close to Highway 61, The Blues Highway, which connects the musical heritage of New Orleans, Memphis and Chicago, as well as his hometown. Moreover as the artist says in Chronicles, Volume I, 2004: ”there’s a thousand different angle at any moment…no action seems inappropriate here.”

“Deep Focus,” on the other hand, is the last series Dylan will produce, in 2020-21, and is named after the cinematic atmosphere in which nothing is blurry.  “All of these images come from movies. They try to highlight the different situations that people are in,” said the artist. In the series consisting of figures and portraits, the viewer is suspended between life and theater in a kind of photographic film in which places and prone are recognizable.

Bob Dylan’s childhood memories resurface in his sculptural works in the series: “Ironworks”. Born and raised in an area defined as “the Iron Range” Dylan reworks iron, raw materials and man-made objects bound by the necessity of industrial production typical of the area into bar chairs, tables, gates and railings. Dylan reclaims the objects of the past familiar to him and revives them in new form with allegorical, symbolic and metaphorical references.

Numerous visitors appreciated Dylan’s artistic caliber. Among them, the artist Len Shyles, an avid fan of his from Delaware, who defined him: “Innovative with his blues music with which he pushes the envelopes and free impressionist in art.”)

For music fans, of course the exhibit offers interactive displays and a continuously playing video.

(from the title: Bob Dylan, Retrospectrum at The Patricia and Phillip Frost Art Museum, Miami )


(…)Housed in the large building designed by Will

Today is The Memorial Day. We offer you three emot

He left us Richard Rogers the architect who trans