Bill Anton, winner of the XLVIII edition of the Prix de West. 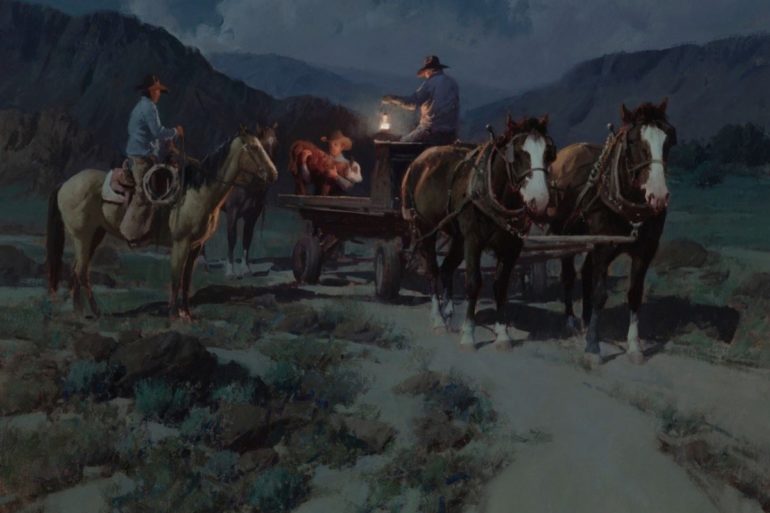 Prix de West Purchese Award 2020. The winner of the 48th edition of the Prix de West is DRUM ROLL…Bill Anton, with the opera “Makeshift Ambulance”. The Prix de West, turns out to be America’s premier western art exhibition and sale every year at (the) The National Cowboy & Western Heritage Museum in Oklahoma City, OK. The exhibition admits themed works composed in different mediums and styles ranging from figurative art to still life and landscaping; from traditional works reflecting the Old West to contemporary and impressionist works of art. This year the winner of the exhibition was Bill Anton who presented two works, one of which, the winner, was carefully selected by the Prix de West Committee and was purchased, as usual, from the museum’s precious permanent collection which, in addition to the Prix de West collection, owns numerous works by the amazing Charles Marion Russell and Frederic Sackrider Remington, as well as other more or less known Western artists and original furnishings of the time.

But the Covid-19 did not exempt Oklahoma City either, which for the 2020 edition that saw (the) The National Cowboy & Western Heritage Museum adapt to the times by announcing the winner by videoconference a completely new method but not for this less exciting, also because winning the Prix de West is not for everyone, and is an exceptional event that boasts a long tradition, with works of high cultural importance that have made American history. The winner Bill Anton, who in addition to the purchase price of the work received the Prix de West medallion and a $5,000 prize offered by sponsor Roberta M. Eldridge Miller, said, “I’ve been in this show for 23 years and it’s been a joy in my life”. Other awards recognized during the event include the Prix de West, are: the Frederic Remington Painting Award (won this year by Kyle Polzin with “Buffalo Dream”), the James Earle Fraser Sculpture Award (won by Harold T. Holden with “Strike Lightning”), the Express Ranches Great American Cowboy Award (won by Carrie Ballantyne with “Young Hand”), the Donald Teague Memorial Award (won by Scott Burdick with “Ponca Nation”), the Major General and Mrs. Don D. Pittman Wildlife Award (won by Andrew Peters with Pleistocene Messengers) and the Robert Laugheed Memorial Award (won by Matt Smith with “North Fork Creek”).

Bill Anton is not a new name in the environment: he has been a participant for 23 years during which he won other awards including the Express Ranches in 2009, 2011 and 2018; the Robert Lougheed Memorial Award in 2009 and the Frederic Remington Painting Award in 2016. He was also the winner of the Autry Museum Masters of the American West Purchase Award in 2012 and his “Campers” or “Cow Thieves” won the “Spirit of the West Award” of the Autry Masters of the American West Show in 2015. Bill Anton was born in Chicago and after seeing the famous “American Western” at the age of 7 he promised to live there again one day, so at the age of 20 he left the Midwest to live on a plateau in Prescott, Arizona, where he still lives and works today. While studying at Northern Arizona University and later with Michael Lynch and Ned Jacob, who encouraged him to paint from life, he worked occasionally, in the absence of laborers, on ranches and farms in the area, learning to ride horses and keep livestock. In 1982 he devoted himself completely to art, about which he says: “I want the viewer to feel the drama of atmosphere and the mystery of a western night. I want the volume and portent of a cloud to be evident in the calligraphy of a brush stroke”. He has appeared in all the most important western magazines in the American continent and his works are in the collections of Sears, Dupont, State Farm Insurance, Bank of America, Hewlett Packard and Trust Company of the West. Now, his resume is now extended by a new, well-deserved, award. You can participate as usual in the auction of the works in competition for the Prix de West, that will be online on September 12,  to close definitively on September 13, 2020.


EN-I’ve lived a thousand years in the backroom o