Between demonstration , speaches and the announcement of the annual winners awards, The Art of The Portrait, leaves its mark on the hearts of participants with the video tribute to Andrew Wyeth and the extraordinary tribute to the Memory of Edward Jonas.

Quang-Ho was the keynote speaker introducing the second day of The Art of The Portrait, the Portrait Society of America’s annual conference, now in its 24th year.

Gifted with an uncommon sensitivity in capturing even the single brushstroke, which he considers essential in the realization of the composition, Quang-Ho was among the most highly rated artists at yesterday’s Face-off Painting Silent Auction. In his keynote address, he highlighted a question that has plagued him throughout his life : how can an artist “Find Reality Through Art”. Question to which he found an answer in time, when he associated personal growth with the spiritual one. Since then he has changed his way of perceiving the beauty of nature, which he considers a divine gift on a par with the artistic abilities he possesses and which he has decided to make available to others. According to Quang-Ho, it is possible to elevate the simple act of looking into the sphere of seeing, only and exclusively if one is willing to name objects for what they are: “Naming objects is equivalent to mentally identifying them with the intrinsic properties that they possess and that allow the artist to grasp their essentiality” declared the artist who symbolically gave the example of glass with its properties of transparency and reflection of light. Being able to see the essential allows you to perceive the singularity of the elements in the complexity of the whole. This is the reason that drives the artist to meticulously take care of the background of the composition, including the portraits – usually monochromatic and flat – in the same way he takes care of the subject of the composition, which, by its very nature is an essential part of the whole.

In the Exhibition Hall, Mary Qian and Kevin Chambers held a demonstration session throughout the day, while in the other rooms the drawing sessions were supervised by the critical eye of Louis Carr, Paul Newton and Teresa Oaxaca, and in the Breakout Rooms different and equally interesting themes were addressed.

Suchitra Bhosle and Tina Garrett showed how it is possible “Painting Expressive Portraits” from photographic reference alone. Bhosle chose a black and white image that she turned into a color composition thanks to her deep knowledge of tonal values that, for personal taste, she prefers to keep warmer in darker tones. Tina Garrett, on the other hand, has created a portrait of a little girl starting from the negative composition of forms. As for the irradiation of light by the effect of a candle, Garrett realized the darker tones towards the outside, gradually creating the semitones that reached the maximum point of light on the face of the little girl in the center of the composition. Garrett argues that in the compositional process it is useless to waste energy thinking about the work as the success or failure of a masterpiece, it is rather necessary to invest time in the study of the great masters of the past to be able to better understand their way of approaching the elements of composition, including, fundamental: light and tonal values. With regard to commissioned portraits, Bhosle has stated that she spends the first two/three days exclusively in the realization of the face, working wet on wet, while Garrett states that she works exclusively on photographic images that she has personally taken with all the necessary chrisms for the perfect realization of the composition.

Dawn Whitelaw in the demonstration session focused on “Finding Likeness” invited the audience to draw the images proposed on the screen and through a guided analysis showed how the photographic eye is fallacious compared to the real image. This is due to the fact that photography tends to amplify absolutely unnecessary details that deceive the eye of the observer who consequently neglects the distinctive features that characterize the subject. For this reason Whitelaw argues that now more than ever, given the use of photographic references in the creative process, to make a realistic portrait, an artist must know not only the concepts related to drawing but also to photography or at least rely on the expert hands of a professional photographer who makes headshots and is able to focus on the distinctive features of the subject. 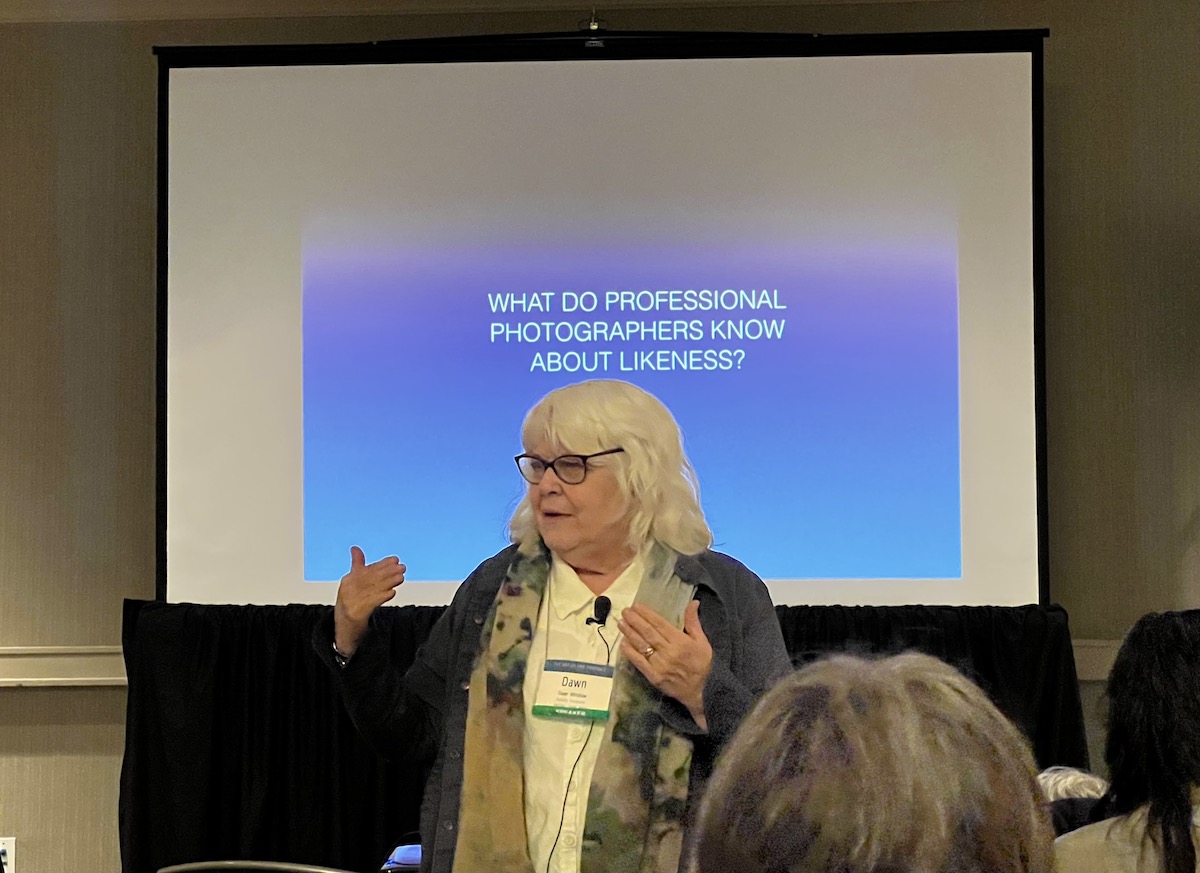 A frame from Dawn Whitelaw’s session, Finding Likeness 5-A frame from Dawn Whitelaw’s session, Finding Likeness“What’s Standing In Your Way?” It could be the title of a film but in reality it is the theme dealt with by Leslie Adams, Wende Caporale, Richard Christian Nelson and Mary Whyte, who on the basis of their personal experiences have told of the series of challenges, changes and bad perceptions of the self to which life has shaped them allowing them, out of a spirit of survival, to continue bringing out the best side that an artist possesses, the artistic one.  For Wende Caporale, moderator of the event, the biggest challenge was the illness and loss of her husband, artist Daniel E. Green following which she moved and experienced a whole new situation that made her wonder who she was. Telling an amusing anecdote about her passion for birds, Caporale mentioned a phrase her husband said long time ago that resonates today as a sort of hymn to the life that allows her to paint whatever she wants: “You are not a portrait painter, you are a painter.” Lesley Adams, a passionate portrait painter who owes her vocation for portraiture to her love of people, family and storytelling, has found herself on more than one occasion receiving commissions from terminally ill people, fully aware that her portrait would be their last tribute. A challenge that she accepted and that shaped her, giving further meaning to her work and the stubbornness with which she completed it. Stubbornness that helped her even when she decided to completely change medium and compositional style in order to grow professionally. Mary Whyte is of the opinion that in life difficulties are part of the natural path because nothing is simple. The author of the project “We The People: Portraits of Veterans in America” has declared that the same project, which today makes her proud, was a whirlwind of emotions and discouragement from which she came out fortified. Artist and gallery owner Richard Christian Nelson said that even just participating in art competitions is a challenge that you need to overcome even when you actually lose. “You just have to adjust and try again,” declares the artist who maintains that two steps are necessary in life: doing well and going further.

The afternoon demonstration session by Robert Liberace and Adrianne Stein on the theme: See the Part, See the Whole, was punctuated by the laughter and tears of Liam, Adrienne Stein’s son, whom Liberace described as: “as beautiful as a work of Raphael”. Mentioning the artistic passion that the entire Liberace family cultivates and which makes him very proud, the artist hopes that Liam himself will one day follow in the footsteps of his mom and dad, the devoted artist and father, Quang-Ho. Liberace’s daughter, Celia, as talented as  beautiful, was nominated the winner of The Future Generation 2021 award, with her oil painting titled “A Broken Curse.”

In the realization of the composition that he made thinking in sculptural terms, the artist has performed an accurate block-in, he routinely spending a lot of time in the realization of this phase of which he says: “I like to figure out what’s there because it’s a mysterious process”   The study “as a carnivore” -as defined by Liberace- in the most varied subjects and during the years of study have allowed him to have the right degree of confidence with which to speak with competence and dedicated passion both of the old masters -with a special eye for Joaquín Sorolla, John Singer Sargent and Anders Zorn, without forgetting the lessons of Diego Velasquez- and artistic anatomy. His unquestionable artistic skills allow him to move on the canvas with his brush in the same way he moves with his pencil on the paper, highlighting important details that can strengthen the subject of the composition. Adrienne Stein, on the other hand, has created a solid composition of the main lines that correctly define the measurements. The realization of the composition for Stein is a continuous game about losing and founding the drawing lines that culminates with the realization of the tonal scale and the finishing of the details. It is interesting to see the connections and differences between these two artists starting from the choice of the chromatic palette: very simple on Liberace’s palette; rich and variegated, due to her deep knowledge of color, on Stein’s palette which never renounces the presence of two colors exclusively produced by Sennelier: Chinese Orange and Baryte Green.

The day concluded with the Gala Dinner and the declaration of the winners in each category -Future Generation Awards, Signature Status Awards and International Portrait Competition Awards. The awarding of the Gold Medal to the late Edward Jonas, by his wife Christine Egnosky, and the video tribute to the great visionary artist -one of the founding members of the Portrait Society of America- moved the audience, who dedicated to him a visual eulogy of great emotional impact.  This feeling continued in a different but equally intense way with the exclusive presentation of the video: “Andrew Wyeth: A Portrait of the Artist as a Young Man” presented by his only living granddaughter, the effervescent Victoria Wyeth, who wanted to pay homage to the memory of her beloved grandfather with a series of unpublished self-portraits.

(on the title:The Portrait Society of America’s team and the volunteer who made all this possible)