Beginner Day: the training day not to be missed for any reason in the world. 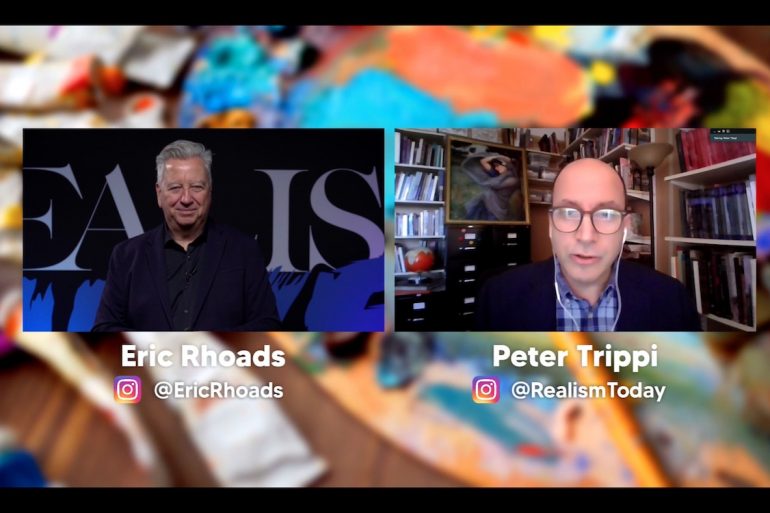 Back for the second year in a row Realism Live, is the virtual event created by the tireless Eric Rhoads and Peter Trippi. These two iconic characters have brought the world of contemporary realism to the forefront through in-person and out-of-pocket magazines and events that have captivated audiences.

Realism Live is the largest event, on a worldwide scale, dedicated to the different artistic styles of realistic art: Figurative art and portraiture, floral art, landscaping and still life. This year more than thirty of the most renowned artists on the international scene will participate. The convention began as usual with the beginner day: the educational, optional day.

The beginner day is a very important appointment and “absolutely not to be missed” as a participant says, because it offers the possibility to know techniques, styles and different points of view that can be helpful both for the beginner who has the possibility to understand his own style and for those who want to refine their artistic skills.

The first lesson taught went straight to the heart of the matter by addressing “color values” i.e. determining how light or dark colors are with Craig Nelson’s session. The artist, a renowned art teacher at the Academy of Art University in San Francisco -where he is executive director of the School of Fine Arts- says: “Color value creates the images we see, and whatever kind of painting you decide to do, value is the key to realism.” In his demo, full of important technical notions, he presented a portrait made following Anders Zorn’s “limited palette”, based on the use of only four colors: white, black, yellow ochre and Venetian red. “Just a beautiful dance of the puzzle pieces of value and color nesting into one another!” defined the demo, the artist Luana Luconi Winner, who performed a pastel portrait in the afternoon.

Luana Luconi Winner has in fact realized for the occasion the portrait of a sailor: Mark the Mariner. Starting from the photographic elaboration, then turned in gray scale, she realized the work, explaining the multiplicity of pastels used: hard, medium and soft that follow one another with rigor and logic; and of the importance of the paper used that creates the background texture. “Pastel is such a wonderful medium that allows you to work between drawing and painting on the same image” says Luana Luconi Winner.

If the line represents the most elementary and simple geometric figure after the point, the demonstration based on Thomas Blackshear II’s “Lose Line First” technique proved how it is possible to execute an extraordinary portrait with only the use of the pencil – and more or less bold pressure- by combining parallel hatching, cross-hatching, squiggle lines, chain lines or simply by using the side of the pencil, which must always be sharp. Starting with the block-in of the contour he laid down dark tones to set the scale of values useful for the realization of the drawing.

The presentation of sponsors always takes place in a constructive manner during the various conventions proposed by Rhoads and Trippi.  The sponsors, in fact, through the demos of important artists give art lessons that give a considerable added value to the convention. Such was the case for Blick Art Materials, which with master artist John Pototschnik presented a demo based on (l) The Value of a Monochromatic Block-In: a very interesting technique based on the “erasure” of color strokes that helps to show objectively the color values offering the beauty of a smoother painting.

The hands can speak without the addition of many artifices and Sharon Sprung through a series of images of her own and of some Old Masters introduced her session based on the study of the hand about which she dispensed anatomical information and advice in the realization of the hand. The representation of the hands is in fact so complex that a good part of the work of artists of all times has focused on the study and analysis of their various positions, both supine and prone.

If the study of chromatic value is important, so is the study of colors and their composition. Who better than Graydon Parrish, color scholar, teacher, and artist, to address such a complex topic with mastery of simplifying concepts? Parrish’s lecture was based on an explanation of the method he uses: the “Munsell System”, the classification system set on a numerical scale, with visually uniform points for each of the three attributes of color: the hue, which is the color understood as red, orange, yellow, etc.; the value, which is the brightness or darkness of a color and the chroma, which is the saturation or brilliance of a color. In Munsell’s scale, each color has a logical and visual relationship with all other colors. Parrish states that in the creation of a color the first thing to do is to adjust the chromatic value.

Composition and proportion are the key words in the still life demo, created by Jeffrey T. Larson, co-founder of Gray Lakes Academy of Fine Art in Duluth, Minnesota and teacher at his academy of his approach, based on “classical impressionism.” A definition that well identifies the key concept of rendering form within a unified light effect as imparted by the great painters of the past.

It is through the narration of the history of realism that Pierre Guidetti, famous and adorable face of Savoir Faire, as well as official dealer of Sennelier America, presented to the public some of the indispensable tools in the realization of the drawing that always remains the foundation of art.

Formally closing the beginner day educational session, Stewart White with a watercolor landscape demonstration. After making a quick preparatory sketch, which also alleviates the famous freak-out effect of White’s watercolor rendering, well known for predominantly architectural works, he made a romantic composition in which he showed all the tools and many tips to achieve particular visual effects.

A truly comprehensive day full of clear, concise and accessible explanations regarding both technique and theory but also the materials used.

A day that continued, as usually happens in the seminars organized by Eric Rhoads and Peter Trippi, with the “Paint Along/Cocktail Hour”. A day whose broadcast was dedicated to Mr. Dean Pickering, acoustic engineer, colleague but above all friend, recently passed away.

(On the title: from left Eric Rhoads and Peter Trippi)

The LOWE Art Museum - University of Miami is pleas

A stop at the Jungle Plaza in the famed Miami Desi

(…)Specifically, the project for the Design Disc

A Poem in Four Letters by Terry Strickland. Oil on