Jason Bard Yarmosky, the artist of his grandparents, between age, transience of life, living together in diversity and family affection. 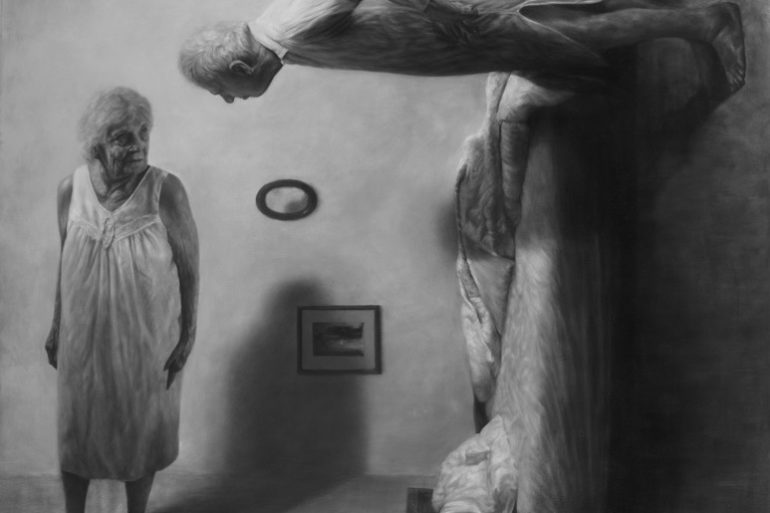 Jason Bard Yarmosky, a New York artist born in 1987, he graduated from the School of Visual Arts in New York City and received the Elizabeth Greenshields Award. While his latest works in the series “Somewhere”, focus on the exploration of the subconscious and dreams, rendered through the manipulation of the textures of paper (which refers to aged skin), for almost a decade his works have focused on the figure of older people, grandparents specifically. An apparently simple and obvious concept. Only in appearance. Yarmosky’s works go beyond the concept of art that glorifies the immortality of the beauty of youth to relate to the real human condition that shifts the emphasis to a mixture of concepts including: age, the transience of life, coexistence in diversity and family affection. For almost a decade, Yarmosky elected his grandparents as inspiring muses, with whom he lived a very close and intense relationship.

His grandparents have a very strong value for him: a cultural and emotional heritage to protect, live, breathe and represent. Personally, I owe my grandparents the most carefree and serene part of my life which remained dormant after the death of my beloved grandfather and then definitively closed after the death of my beloved grandmother. My grandmother, like the artist’s grandmother, suffered from Alzheimer’s disease, and she was deprived of the most precious part that the human being possesses: memory and its memories.  While studying Jason’s works, I fell in love with the way he portrays the figure of his grandparents in a gentle, delicate and at the same time ironic way. While the grandfather, his:”…narrator I would choose for any story” sometimes appears in costume next to his beloved wife, the grandmother is represented in costume by Wonder Woman (Wintered Fields) because for the artist the grandmother was, and is, his heroine. The costumes represent for Yarmosky the symbolism through which to bring out all the heroism and vulnerability of the human condition. The selected work highlights the difficult condition of the disease that leads the person to de-contextualize herself in relation to the environment in which she lives.

The grandmother in this case, unlike his grandfather, is represented standing on the side wall dressed in a dress that she will no longer be able to take off and to which everyone will have to get used: that of dementia. Jason Bard Yarmosky is the artist of the grandparents: grandparents as a precious family treasure for both young and old, who become a protective filter to facilitate the psychological and emotional development of the child and accompany him in his becoming an adult, who will know how to guard them, making them live inside him, because as long as he lives, they will live with him.

A personal tip: after carefully observing the original image, which can be as disturbing as the disease, try turning it to the left and enlarging the image to see the intensity with which this man and woman look each other in the eyes despite the disease.