Miami Art Week is all about art, luxury and exclusivity, and it is in this context that MIami Niche meets Federico Rossi, Chief Operating Officer of Rossinavi, the Italian luxury superyacht builder. A family brand born in 2007, as a natural evolution of Cantiere Fratelli Rossi and their love for the sea and passion for craftsmanship.

We meet him in the exclusive Collectors Lounge of Design Miami where he joins us accompanied by Cristian Meriggi, Head of Marketing of Rossinavi.

Luxury and exclusivity are not, however, the only elements that characterize the brand that in this context introduces its new ambitious project: Sea Cat 40. The new revolutionary catamaran which is fully electric, environmentally friendly and energy efficient.

If in the making of their boats -for example the Utopia IV- Rossinavi started from the realization of the external design, the SeaCat 40 starts from the structured technical creation of the catamaran, once used almost exclusively for passenger transport and now designed to be a vehicle of its own use.

Designed to absorb sunlight during daylight hours and transform it into energy, taking full advantage of the capabilities of photovoltaics, the Sea Cat 40 can store and exploit clean energy thanks to its customized solar panels with advanced technology, installed on an area of 135 square meters. The panels are capable of producing up to 250kWh: the average electricity consumption of around five or six American families, or in other words that of a marina. 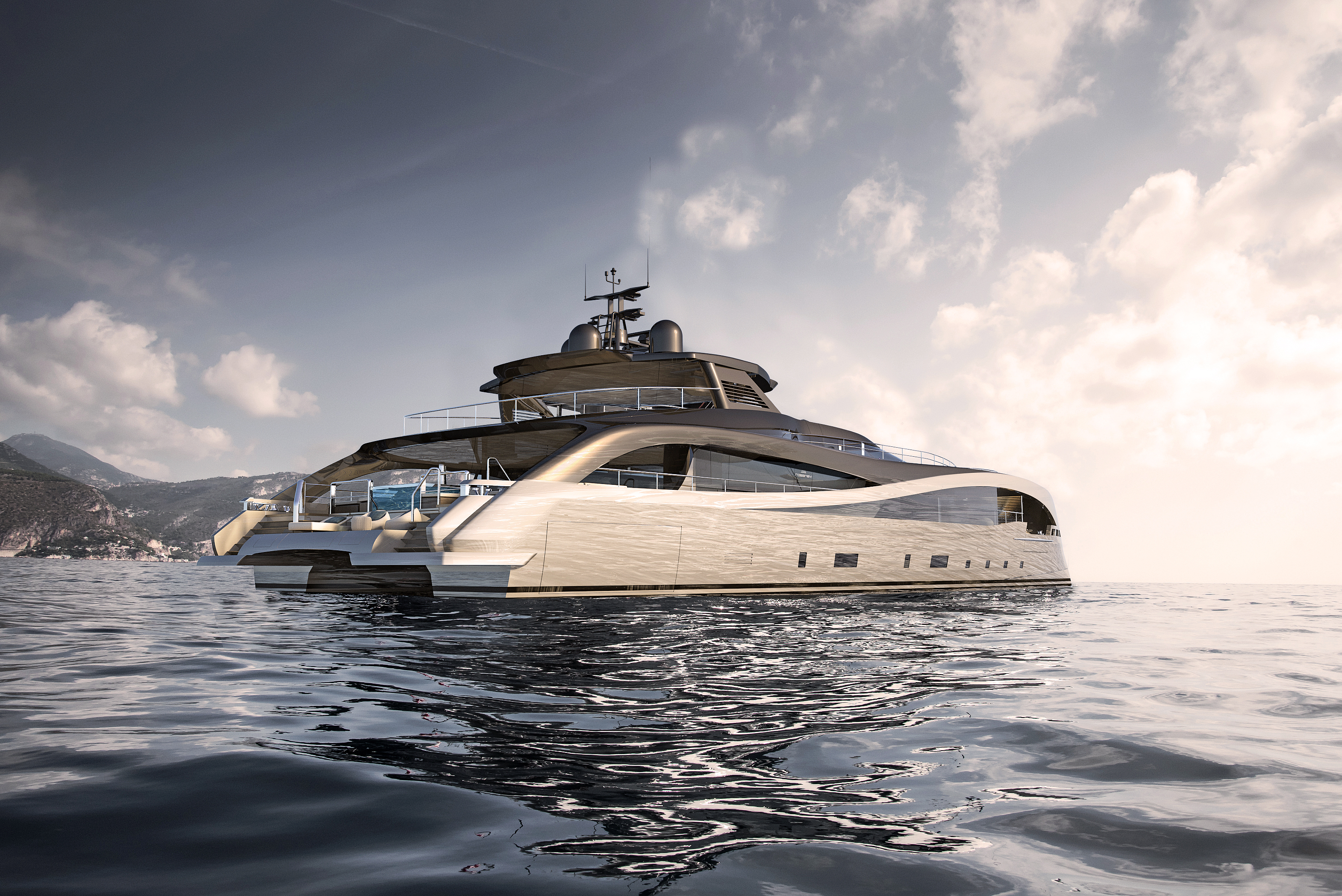 Now, picture the scene: you’re on your Sea Cat 40, and you’re making a transatlantic crossing. The energy is produced by the solar panels and transferred from the boat to the living area, making for a quiet, eco-friendly experience of at least twenty days. Enough energy to cover a distance of 3,850 nm at a speed of 8kn. The centralized control system allows you to maintain the battery status between 40% and 80% in order to preserve the battery and make it last longer with a very low environmental impact. In fact, Sea Cat 40 can be programmed to cruise 80% in full electric mode, using only 20% of diesel electric support, while on return trips it can operate in full electric mode. You then decide to return to your oceanfront home in Miami Beach and can use the energy stored by your Sea Cat 40 to provide power to your home on still land.

A truly crazy concept, especially when you think about the environmental resources and energy consumption involved with sailing. “The idea is to create a link between nature, electricity and futurism, which, supported by the most advanced technologies is able to offer excellent performance to Sea Cat 40 that offers priority to the environment. A real challenge for the future of boating and a milestone for the shipyard,” says Federico Rossi.

The Sea Cat 40 was the natural evolution of a project that was kept under wraps until it was fully developed and aimed at eco-sustainability. In fact, the 40-meter long does not need all of the daily self-produced energy, and because of its technical peculiarities it returns the excess energy produced to the marina or private property, allowing it to disconnect from the local power grid if it is hooked up to a property on land. “It’s a gearbox and as such it can be as scary as the automatic transmission was on cars back in the days,” states Cristian Meriggi about Sea Cat 40’s innovation.

Sea Cat 40 is a project that started a year ago on the basis of the need to “create eco-sustainable luxury products”, as also stated by Cyril Gutsch founder of “Parley for the Oceans”, of which Federico Rossi is ambassador for sailing.

The motto of Parley for Ocean is in fact: “Purpose is the new luxury”, a motto with which the founder wants to share the idea of creating a form of environmental organization that can involve creators, thinkers and that leads towards a new idea of economy. “An evolved company today must think outside of the actual profit, ranging between the arts which must interact with each other. Getting to this point for us today also means interacting with an audience which is creative,” says Federico Rossi.

But while the conceptual focus is on the boat’s green capabilities the design, both interior and exterior, with its aluminum hull, follows as always Rossinavi’s impeccable philosophy of seeing its designs as a unique intellectual and physical expression. To develop the concept for the first Sea Cat 40, Rossinavi enlisted the services of Italian naval architect Fulvio De Simoni, the best-known yacht designer in the business. (A second model with a design by an archistar from a thousand and one nights is already in the works.) The result is a modern and elegant design inspired in its realization by phytoplankton: the set of algae that inhabit surface marine waters and use the sun’s rays during the day as a source of energy for survival, which they then release at night in the form of bioluminescence playing a key role in the food chain. “It was a little philosophical experimental game in which phytoplankton observe the human attitude to adapt to change. However, if change implies, as in the current case, a human impact that is too fast, the latter must give the environment a chance to adapt,” says Cristian Meriggi. 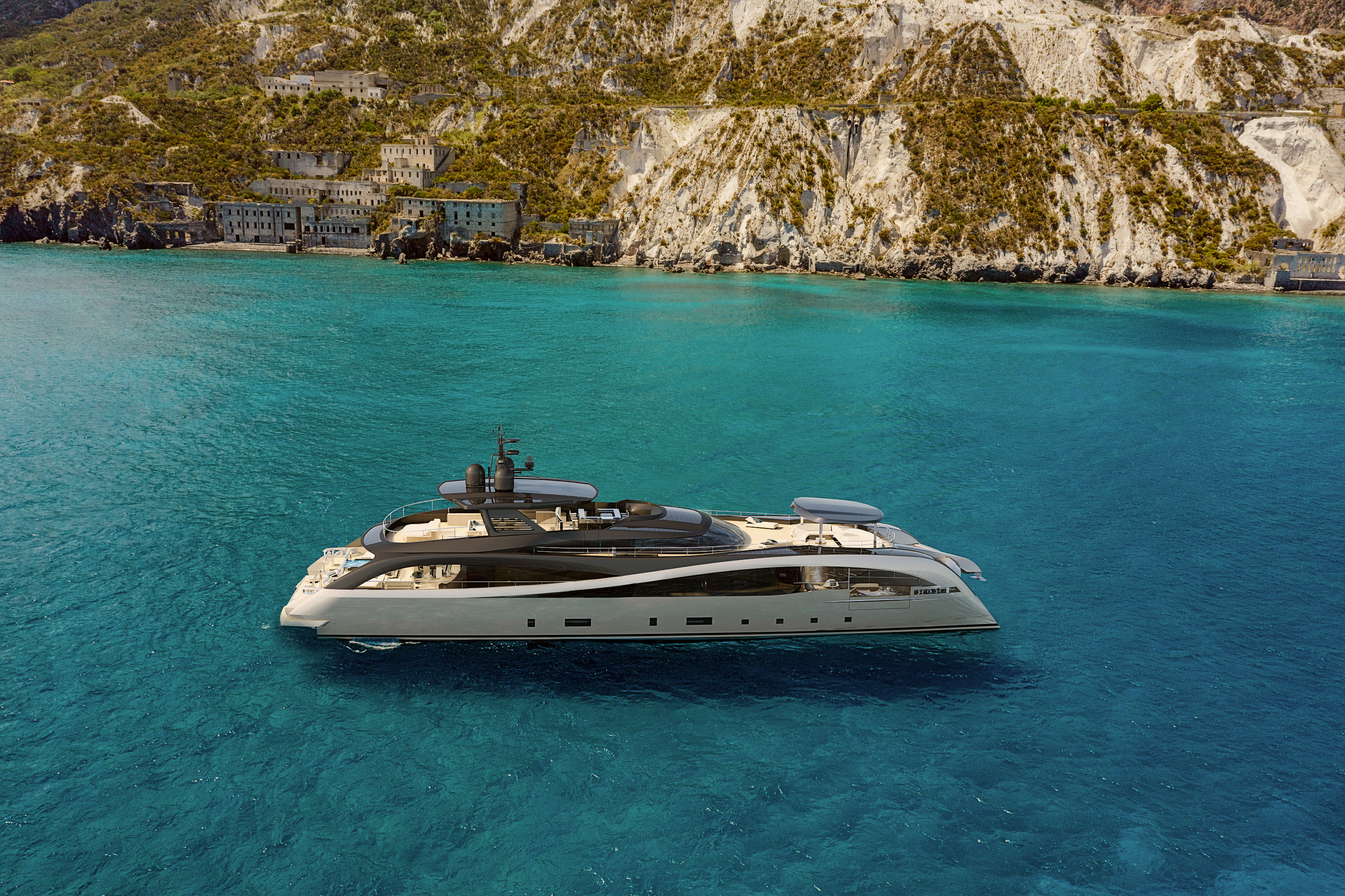 The catamaran boasts a length of 42.75 meters and a width of 13.75 meters, with a surface that allows for wide open spaces, 5 guest bedrooms -one of which is the master- and 4 crew cabins for a total of 7 personnel and with a maximum draught of only 180 centimeters, is ultimately the result of the best engineering and experience of Rossinavi, who always constantly engages in the research of the shipyard towards a more sustainable nautical experience.

However, Rossinavi’s greatest ambition today is to succeed in conveying the message of eco-sustainability through education, which for example could start from and be conveyed by influencers. “In the world of influencers, the wealthy and the billionaires give the common citizen a kind of ideal aspiration, which needs to go beyond the image of an extremely high performance car, but totally heedless of the CO2 emissions it entails, otherwise we risk giving the new generations that kind of ambition,” declares Rossinavi’s COO, who adds, “if these influencers manage to change this approach we can really improve the world.”

If Christopher Columbus crossed the globe without polluting, the Sea Cat 40, with a reduction of 1/6 on the emission of carbon dioxide, in addition to offering luxury, silence and comfort is able to offer eco-sustainability: a first step towards a great goal.

(on the title: A rendering of Rossinavi’s 40m Sea Cat, designed by Fulvio de Simoni)