Amoako Boafo and the revaluation of black culture between finger painting and the essence of the subject. 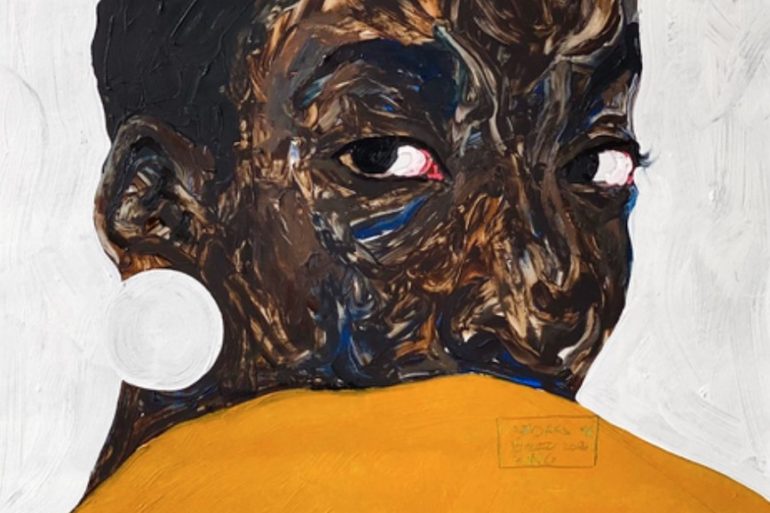 Amoako Boafo, his name is now in art magazines all over the world consecrated among the gods of the Olympus. After his debut at the FIAC -International Contemporary Art Fair- in Paris in October 2019, an event in which his works were literally “sold out”, he made his entrance into the Miami scene, first as an artist residing in the renowned Rubell Museum (formerly Rubell Family Collection), then entering the NOVA section of Art Basel/Miami Beach, represented by the Marine Ibrahim Gallery in Chicago and the Roberts Projects Gallery in Los Angeles.

Originally from Accra, Ghana, Amoako Boafo started drawing as a child because he avoided going around and getting yelled at. His was not an easy path because the poor family didn’t have the chance to make him study, let alone art – a waste of unprofitable time – but his mother’s change of job and the understanding of his employer allowed him to enter Ghanatta College of Art & Design in Accra, winning the Best Abstract Painter of the Year award in 2007 and the Best Portrait Painter of the Year award in 2008. After meeting his wife, Austrian artist and curator Sunanda Mesquita, he moved to his “adopted city, Vienna”, as the artist calls it, where he is currently pursuing his MFA at the Vienna Academy of Fine Arts. The decision to enroll at the Academy is primarily due to the need to understand the city’s art scene.

Before winning the Walter Koschatzky Art Prize for “works on paper for artists under 35” in 2017 and the STRABAG Artaward International for artists under 40 in 2019, Amoako Boafo had a very difficult time in the Austrian city because of the stereotypes about the black race. His personally experience led him to found, in 2013 together with his wife, WE DYE, to which Jaqueline Ejiji was later added, today an indispensable member of the collective. The project has been awarded in 2014 with the kültüř, the scholarship of the city of Vienna and its aim is to focus voices, perspectives, knowledge and experiences of the different marginalized diasporas, giving them in a self-organized artistic space dedicated to amplify the artistic and cultural production of black, colored, queer, trans and inter-gender people: “the others”, like society in general, black or white, label them.

The name Amoako Boafo, which echoes in the environment as the greatest Ghanaian talent after Ibrahim Mahama – a renowned artist who performs large-scale installations – was on Artnet’s “Artists To Watch” list long ago and fame and prestige are not long in coming. The merit is due to the expressive power of his large portraits, on which his artistic production is based, which wants to give a different image than the stereotyped vision that sees Africa associated with the woman carrying a child and carrying a basket on her head. For Amoako Boafo, Africa is much more and this is what he primarily wants to communicate to the world: a renewed vision of Africa, with its talents, its dynamism and its relevance.

Inspired by Expressionism, Amoako Boafo’s style consists of a generally monochrome background that focuses the viewer’s attention on the subjects represented: “The only factors in the painting that are worth formally analyzing,” says the artist. They are the friends, affections and acquaintances of Ghana and Vienna, the characters celebrated in his works, people who have the merit of having evolved the concept of “black culture”. If the monochrome background is composed with the classic brush, the figurative representation of the characters is instead made with the addition of mellow layers of color that the artist applies with his fingers in a completely gestural way. It is incredible to see the final effect and to see how his fingers act as a multidimensional brush in composing the faces, their intense expressions and hands, composed of whirls of blue and brown oil paint; so subtle that each stroke evokes the energy pulsing from these figures soaked in colour, while the colours of the body soften almost to abstraction. Mera Rubell, founder with the family of the Museum Rubell who hosted him for the artistic residence and had the opportunity to see him at work and catch his every gesture, said in an interview: “It is really mysterious the way he captures the most powerful human expressions with just his fingers moving on the canvas.

The focus of his subjects is undoubtedly the gaze, so penetrating and intense that it interrupts the spectators’ observations – often white ones – on the canonical prejudices about the way black culture is managing to build its own identity in a totally unconventional way. Amoako Boafo invites viewers to pay attention to his subjects, their posture, what they are wearing and their skin tone, in order to understand the bold statements that the artist, a noteworthy young voice in the art of the African diaspora, lets imply. The artist has composed several series, the most famous and well-known is the Black Diaspora in which his works become the medium through which the artist celebrates his black identity. Amoako Boafo states: “The primary idea of my practice is representation, documenting, celebrating and showing new ways to approach blackness.”

The artist, who currently works with oils, acrylics and pastels on canvas or paper, also uses alternative means to expand his painting practice in search of new means to treat his subjects, including the transfer of European wallpapers with which he manages to create interesting artistic connections. But before refining his technique he explored different mediums: his background and his artistic development can be seen in the “Diary Series”, in which the artist deals with different themes such as: the occupation of space, the politics of the body, the series of individual expectations and the symptoms of knowledge.

While his studies in Ghana have given him a certain discipline, his study at the Academy of Fine Arts in Vienna has given him the opportunity to be free from the archaic social patterns which, I might add, are not only part of Ghana’s black culture, but of the whole world in general, which tends to consider masculinity – in a negative sense – as the essence of the “real man”. In many of his works and in particular in the series “Detoxing Masculinity” the artist deals with the theme of masculinity, the concept given to him as a child, according to which man is such only if he is virile and aggressive: concepts that the artist tries to distort in favor of his own search for virility that has nothing to do with the concept of aggressive masculinity. An example is the frequent use of flowers or the color pink in the representation of the background or clothing of the subjects: criticized by many and consequently even more used by the artist who fights for the destruction of certain gender stereotypes. The same looks and poses of his subjects have a certain softness and serenity that contrasts with the masculine position par excellence.

If in some ways Boafo’s gestural lines bring to mind the works of Egon Schiele, his signature is candidly inspired by him and the major figurative and expressionist painters who used to condense the signature into a “small figurative box”: the framing devices were in fact intended to remind the viewer that their works, as well as his portraits, are condensed on the canvas, but in reality there is much more than is limited by the painter’s material. Amoako Boafo, who initially saw the door slammed in his face in Vienna because he was African, as well as having collaborated in the creation of the men’s collection Dior Estate 2021 with Kim Jones, is now an artist collected by public and private institutions, including the famous Albertina Museum in Vienna and more recently by the Solomon R. Guggenheim Museum, the Aishti Foundation, the CCS Bard College Hessel Museum of Art, the Pizzuti Collection of the Columbus Museum of Art and of course the Rubell Museum.

But in addition to public and private institutions there are also numerous collectors including Kehinde Wiley, a great figurative realist painter, who through his works retraces centuries of art history in which the protagonists are, however, the blacks, which except for some works, hardly appear in art history both as artists and as models. Kehinde Wiley is also credited with having discovered him on Instagram and presented him at the Roberts Projects Gallery in Los Angeles, where in January of this year the artist had a solo exhibition entitled “I See Me”, also reviewed by the LA Times.

In September 2020 Amoako Boafo will be present in person at the opening night (September 10, 2020) of the exhibition “I Stand By Me”, Amoako Boafo’s first solo exhibition at the Marine Ibrahim Gallery in Chicago, on display until November 1. The exhibition will present works never seen before in which the artist omits all that is superfluous, further belittling his backgrounds to a simple stain of color, to focus on his primary interest: the subject. The works have been composed in a moment of reflection, in this period of crisis that has affected the whole world and that the artist has analyzed realizing how important are the concepts of autonomy and self-reflection, which he then translated into art as a tool to explore the complexities of human experiences and to represent the vivid sense of the presence of each subject in the world. In the exhibition “Stand By Me” Boafo offers the subjects represented an even higher recognition than he already did with the works of the past, not only for the physical dimensions of the subjects but also in terms of spiritual greatness. In the titles will no longer appear exclusively the names of the characters, but some people will remain anonymous, while others will be subtly revealed through suggestive elements taken from the title.

If you’re lucky enough to be in Chicago in September, have a tour and take a closer look at the work of this great artist who is revolutionizing the black art world from prejudice and who made headlines in the art world when his 2019 “The Lemon Bathing Suit” was auctioned off for £675,000 at Phillips’ 20th Century & Contemporary Art Evening Sale in London this year, eclipsing the initial estimate of £30/50,000 more than ten times.

The Andy Warhol Museum in Pittsburgh, PA, in celeb

The world converges towards Realism Live between l