Alfred Conteh’s African-American culture of erosion, oxidation and the use of unconventional materials. 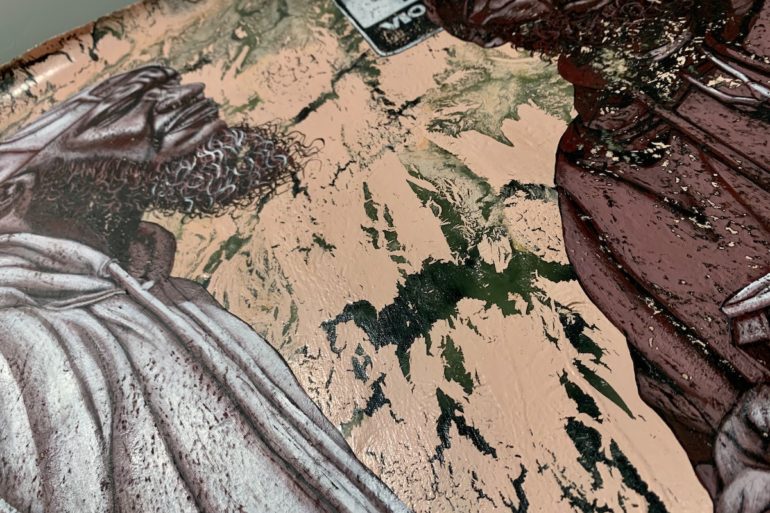 Alfred Conteh, a tall man, seems to have come straight out of one of his mammoth paintings. Guest of the Fountainhead Residency run by the adorable hosts Kathryn and Dan Mikesell, about which Conteh says: “A great and enjoyable experience, first of all because the Mikesell are people of respect, devoted as few to art and to the artists who become part of their community and who consequently take care of themselves, allowing them to live at 360 degrees the entire artistic entourage of Miami. It was a great experience also because it gave me the opportunity to work assiduously on my work: In a month of residency I managed to combine more than I do in my studio, also working for twelve hours in a row”.

Born in Fort Valley, an hour and a half from Atlanta, (class of 1975) Alfred has a twin brother and an older sister, who like him were educated by his parents to the history, culture and respect that led him to pursue the path of art in a narrating sculptural sense. In particular, the artist has combined culture with a passion for comics and cartoons and has made his way, earning his Bachelor of Fine Arts degree at Hampton University in 1997, and his Master’s degree at Georgia Southern University, in 2004.

For a few years now he has been living in the capital of Peach State and working in a studio that, for the volumes of his works, “would require more space“, says Alfred with a laugh.

His works range from sculpture (his favorite art form) to painting on canvas or paper, acrylic and oil, without phases of the path with a first and a then. Although he does not reject the canonical art at all, he describes himself as very attracted to the unconventional materials that he experiences concretely to the point of dominating the material. In both sculptural works and paintings he frequently uses atomized dust of steel, bronze and brass, epoxy-resin, resin and fiberglass, while for sculptures, always on a large scale, he mostly uses epoxy-resin steel, epoxy dough, aluminum, bronze and brass atomized powder and plastic urethan. These are materials that you need to know in order to manage them, but that according to Conteh: ”There is no better system of knowledge than direct experimentation, which allows you to familiarize with the materials until you dominate them, so that you have a complete view of how and in how they react according to the established employment.” “I continue to learn while practicing, and this way I can expand my art to new frontiers. I am also very fascinated by the multimedia world towards which I would like to approach”, says the artist.

During his time at Fountainhead Residency he produced only canvas and paper work for logistical reasons but due to the extent of his work he had to work in the Fountainhead Studios, separately from his fellow residents, because bigger spaces facilitated him in the realization of his works. If during The Fountainhead Open Day, us  of Miami Niche had seen some of his works, two of them large-format, the one he just completed and exhibited in the Fountainhead Studios is even double the size. He represents two Characters from Atlanta: Maurice (left) and Anthony (right) who are well-known figures in the Atlanta music environment: the famous DJ Unk (nickname) and the musician Maurice.

Looking at the painting, the impact is very strong, but it is only when you approach it and observe it carefully that you can see the peculiarities: the texture of the canvas thickens because of the multiple layers of paint (Conteh manages to stretch out up to five or six, mixed with powders of atomized metals that give the canvas almost a supporting structure, so thick). Looking at Alfred’s work you have the feeling of feeling part of the work, so in the room of Fountainhead Studio there was me, Alfred, Anthony and Maurice who with his hand makes the sign of the four, pointing to a neighborhood of Atlanta, explains Alfred. Conteh uses symbols of South American folklore that characterize the characters and that do not belong to glossy magazines or post-pose photographs, but are people of his community who he knows personally and who honestly, he reproduces on canvas in an absolutely authentic way. In the Two Front series, it is possible to observe the overlapping of the layers of paint on the canvas because Conteh’s artistic process involves the manual erosion of the overlapping layers that the artist performs in order to highlight the sense of wear and tear, oxidation and abrasion. Although in a different way it is possible to see this peculiarity even in his works in acrylic, made such with great skill. Alfred Conteh, as a man, Southerner and African-American portrays with this technique behemoths that commemorate the people, culture and battles of the African-American people. Says Conteh: “My people have been left to rot”, in the same way that an object is exposed to the action of events. His works therefore voluntarily assume that air of degradation, of the wear and tear of time that refer to his way of facing, in a narrative way the entire African diaspora, through the authentic message of his works. Before proceeding to the canvas of the project, he creates preparatory drawings more than anything to overcome the problem of the proportions given the measures of his work.

After being able to convince him to take some photographs next to his works, we greet each other with the certainty that we will see each other soon, probably at Miami Art Week, also the Fountainhead experience, his first experience as an artist in residence,”It’s been so uplifting that it’s going to be repeated elsewhere in the coming spring,” he said.

(In the title: part. from Alfred Conteh at Fountainhead Residency production.)