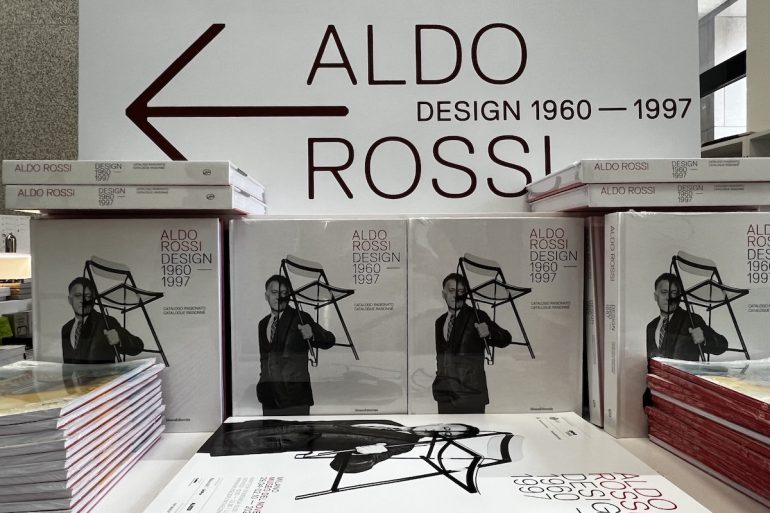 The Museo del Novecento, in collaboration with the City of Milan, the Aldo Rossi Foundation and Silvana Editoriale present, Aldo Rossi. Design 1960-1997.

The exhibition, curated by Elena Spongaro, former scientific curator of the Foundation, focuses on Aldo Rossi’s design production, assembled for the occasion in a comprehensive manner.

As Rossi’s view of design is a change in scale of architecture, the exhibition is an in-depth look at the personality -complex, but always consistent and true to itself- of the architect, designer, theorist and critic, the first Italian to win the Pritzker Prize in 1990 and among the undisputed -and most beloved- protagonists of the 20th century visual scene.

The exhibition opens with a famous phrase by the Milanese designer: “A piece of forniture is a mixture: form, function, materials and so many beautiful things attributable to architecture. The pieces of forniture, then, are “objects of affection, “or at least I think that they must be.” The quote, taken from Scientific Autobiography -a book that, with the essay The Architecture of the City, became Aldo Rossi’s ideological summa- represents the synthesis of his thought. The exhibition consists of 350 works including drawings, paintings, prototypes and models, design objects and furniture-many of which are still in production- set up in the exhibition space curated by Rossi’s associate collaborator in New York, Morris Adjmi.

In the years between 1961 and 1997 Aldo Rossi developed a multiplicity of furniture and objects, with which he experimented with forms and colors. He ranged from the field of metals and wood -among his favorite materials- to marble and stone; from ceramics and porcelain to handcrafted, industrial textiles and plastic materials. His purist vision allowed him to relate the concepts of construction and functionality regardless of whether his works were architectural projects rather than furniture or design objects.

If the cross-sectional analysis of Aldo Rossi’s works shows the impossibility of separating the conception of drawing from architecture and design, from a thematic analysis his production of those years can be divided into nine exhibition sessions that highlight the essential principles of his thought.

The first thematic session is: Poetics, Objects and Architecture. In it the elements of Rossi’s universe materialize: from the Theater of the World, made for the Venice Biennale in 1979, to the Elba Cabin for Bruno Longoni Atelier d’Arredamento. The two projects, both made of wood evoke elements related to childhood and remembrance.  In the Theater of the World, in particular Rossi represents a magical, almost mythological building in which is condensed the designer’s ideology for which: “image contains function.”

Also united by the use of wood are, in the room, the AR2 chairs, designed for Longoni, and the Milano for Molteni&C., also known as the Sedia Duecento because of the copper button that refers to the 200 lire coin on the backrest. With other objects, in the center of the room are the prototypes of the Perlacor coffee maker whose name derives from the percolation extraction system, made for Alessi and symbolically representing the beginning of Aldo Rossi’s journey into the world of industrial design, which is explored in depth in the second thematic area, The Laboratory of Industry.

Starting with the use of pure, almost archetypal forms, such as: the cube, the sphere and the cone, but also the octagon and the pyramid, Rossi began the journey of experimenting with objects related to the world of coffee. After all, coffee pots, are an element of great fascination that accompany him throughout his life and symbolically represent the transition from the world of architecture to the world of design: an obsession that sees them represented on preparatory sketches, drawings and photographs and with which he elaborates the process of conceiving projects by analogies and fragments that characterize the birth of Rossi’s ideas. The pure forms with which he approaches the study of innovative coffee pots are the same with which he creates architectural buildings and in which the dome that adorns the Theater of the World and city buildings becomes the lid of the La Conica coffee pot, refined by a new cylinder structure for Alessi. A reference that elevates the design of objects to their convivial function.

In the section: A Domestic Theater of the 1980s, the focus is on Rossi’s approach to the world of furniture and accessories. The memory of cherished objects and his vocabulary based on purity of form lead him to design practical furniture with immediate visual impact and use. An example of this is the Parigi chair (for UniFor) -released in 2021-presented in several examples and also reproduced in mixed media and collage in the work, Milanese interior with person observing the Duomo with fog (1989). The chair, with streamlined forms and designed for the Milan studio, meets the need for “domestic space to work” by serving as both a studio and office seat.

The collaboration with Artemide led to the production of the Prometeo lamp, of pure geometric inspiration, while for Alessi he produced the Momento wristwatch. The clock, is another important element present in both Aldo Rossi’s drawings and works with which the architect assumes the passage of time as a concept pertaining to architecture, in accordance with the ideas of the past.

Also from this period is the tray: Tea and Coffee Piazza, in response to the experimental project conceived by Alessandro Mendini, which involved numerous international artists engaged in the search for a new language in the design of objects for the home. Rossi designed a micro-architecture for the occasion: the tray that circumscribes a space (the plaza) and the teapot, coffee pot and other ceremonial components that become small buildings that go to make up the city.

The city of Milan, specifically, is the unit by which Rossi measures himself in understanding the architectural development of other cities. The Lombard capital is at the time of its formation, a postwar city that becomes the city of optimism politically pervaded by the values of social justice of communist matrix mitigated, by the Christian Democrat wing of the state, in the Fordist vision of production and consumption. These elements characterized all of Rossi’s production.

With Affection Projects, the cube and the square module used to design some buildings, such as: the San Rocco neighborhood in Monza (1966), the ossuary of the San Cataldo Cemetery in Modena (1971-1978), or the Sandro Pertini Monument (1988-1990), are also applied to the design of small-scale objects such as the Cubic Pot for Alessi, far removed from traditional forms.

In Craftsmanship and Design, twelve of Rossi’s sketches, which always refer to the architectural forms of his designs, become the bases for the Taccas art initiative by the Oristano-based ARP studio. Another project, this time on an Italian scale, involving multiple artistic authorities of the time whose drawing bases became manufacturing carpets. The Taccas project -from the Sardinian name for the loom notches- began the cultural and figurative renewal of Rossi’s career.

In Varianti d’Arredo, the architect’s attention is focused around the functionality of furniture, its design and construction. The Cartesio bookcase, made in collaboration with UniFor echoes Rossi’s typical facades with square windows with a central cross, as does later the Piroscafo bookcase, made in collaboration with Luca Meda for Molteni&C. In the center of the room, the numerous chairs designed by Rossi are animated by the search for detail and break the usual pattern with an apparent simplicity of form.

In Domestic Biography, on the other hand, the reconstruction of Rossi’s homes and studio is presented through a series of objects of fondness that bring back to the architect’s fairy-tale and theatrical imagination: from wooden ducks to American coffee pots, from paintings to drawings, combined for the occasion with some of the architect’s projects.  Among the architect’s projects are: the Convent cabinet for UniFor, the Shaker-inspired cabinet -unique piece made by Bruno Longoni- or the coffee table and bookcase in collaboration with Leonardo Ferrari.

Design and Architecture brings together drawings, architectural and design models that refer to Rossi’s architectural projects, among them for example the lighthouses: another pivotal element in Rossi’s poetic design. Inspired by the design of the Miami Campus and the memory of lighthouses in Maine, the geometry of lighthouses is employed in the creation of the ceramic plate, tea and coffee service for Rosenthal.

Finally, it is the Theater of the World, which closes-and cyclically reopens-the exhibition. This section also features, affixed to the walls, the best-known drawings and projects that Aldo Rossi designed and represented. Proceeding by topos and analogies ranging from the elementary study of the house, to that of cities, Aldo Rossi, demonstrates that in monumental architectural design, as well as in design, history and the present coexist.

Apart from architectural and design works, it is clear in the exhibition how drawing, along with the written word, become an integral part of Aldo Rossi’s thinking. In fact, the artist releases drawing from its meaning as a simple technical tool -used to depict buildings and projects according to conventional representations of architecture: in plan, section, elevation and axonometry- to elevate it to a graphic expression aimed at probing hidden and unexpected meanings of his architecture. With drawings in particular, which characterize his entire artistic production, Rossi makes analogies of thought, form and meaning that lead him to fragment his works, which are repeatedly photocopied and set up in sometimes imaginative combinations and loaded with new signs and colors.

His passion for drawing and for art in general-clearly inspired by Sironi- allowed him, in 1979, to become an Academician of the prestigious Accademia di San Luca in Rome. His artistic disposition led him to experiment with different techniques and mediums, from canvas to the famous blue notebooks: small notebooks rich in reflections that represent a kind of architectural diary on the meaning and value of making architecture, in a dialectical comparison, always authentic, with the great masters of the 20th century and with the history and protagonists of the past.

Among the various awards he received during his career in addition to the nobel prize for architecture, the coveted Pritzker Architecture Prize are, among others: the Hague Honor Award in 1991, the Jefferson Memorial Award in 1992, the appointment as an honorary member of the American Academy of Arts and Letters in 1996 and, a year later, the Special Culture Award for the “Architecture and Design” sector, conferred by the Presidency of the Council of Ministers.

The exhibition catalog, published by Silvana Editoriale, is dedicated to the late Germano Celant, celebrated art critic, co-founder and curator, with Chiara Spongaro, of the Aldo Rossi Foundation.